As Wolfenstein: The New Order opens, you, playing as series stalwart B. J. Blazkowicz, find yourself on an Allied heavy bomber that is part of a formation that is under a furious attack by German interceptors. When you man one of the bomber's turrets to protect it from fighter attack the scene you'll see is something more out of Secret Weapons of the Luftwaffe than the history of the US 8th Air Force. That's because this raid is taking place in the late 1940s in a world in which the Nazi War Machine's secret weapons program accelerated quickly enough to turn the tide of the war in Germany's favor.

This intense aerial battle is just the opening salvo in an all-out assault on a fortified castle on the Baltic coast of Germany that serves as the headquarters of the dreaded Nazi General Deathshed, an assault that represents the Allies' last ditch effort to turn the war in their favor ... and an assault that despite your best efforts ends in failure. A traumatic head injury puts B. J. in a catatonic state for a decade and a half, and rather than awakening at the dawn of the Age of Aquarius he finds himself in an Orwellian nightmare world caught in the clutches of the Third Reich. It's time to find the Resistance and complete the business left unfinished in 1946.

The world created in Wolfenstein: The New Order is a fascinating one. We've seen plenty of shooters featuring Nazis as guilt-free offerings to the slaughter or as almost cartoonish caricatures, but rarely as the cruel and sadistic monsters they actually were, made the worse when they're flush with the self-satisfaction gained from victory. The game adds a distinct Sci-Fi bent to its world that removes it from the realm of believable alternative historical timelines, and that Sci-Fi vision seems like something that would have come out of the imagination of a 1940s futurist rather than a modern Sci-Fi writer, but it all makes for a memorable experience that's missing in so many modern throwaway shooters. A Berlin filled with grandiose, monolithic buildings of steel and concrete and a London filled with Nazi monuments and patrolled by towering robots are pictures that will stick with you after playing the game, long after you've forgotten the countless jungle camps or desert villages of other games. And the game provides plenty of fodder for those of you who want to know even more about this nightmarish vision of futures past, sprinkling the levels with posters, notes, news clippings, and the like for you to peruse and learn of how the Nazis subdued the Soviets or forced America to sue for peace. Dramatic cutscenes and topnotch voice acting help to add emotional impact to the game and tie everything together. 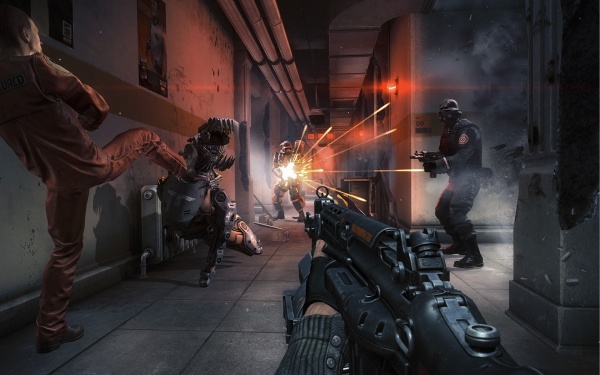 At this point it's worth mentioning to the parents or squeamish among you reading this review that the game is quite violent. If Wolfenstein: The New Order was a movie, its director would probably be Quentin Tarantino. The knife kills are quite graphic, there are scenes of torture, and heads and limbs are literally torn from bodies. Although war is indeed quite brutal in reality, at times it felt a bit over the top for a game.

Atmosphere and story are a large part of the experience in Wolfenstein: The New Order, but it's probably time I turned my attention to gameplay and since this is a first person shooter let's look at the weapons first. The game takes a simplified approach to its arsenal, providing a single weapon type in each class such as an assault rifle rather than filling the game with different makes, models, and variants of those weapons. You can carry two of each weapon type, and carry them all at once, choosing whether to single or dual wield each. Dual wielding sounds better than it actually is, though - since you can't aim down the sights while dual wielding it's not a very accurate weapons option and so is a really good way to go through twice the ammo and have half the kills to show for it. Weapons are selected by bringing up a wheel with the right bumper trigger or using Y to select your previously equipped weapon. I had problems with both of these, because for some reason the Y button would occasionally surprise me with the weapon it equipped and the right bumper trigger is overloaded to also throw grenades. Too many times when I desperately needed to toss a grenade I found myself staring at the weapons wheel instead (overloaded buttons are also an issue with the X button assigned to both picking up ammo and objects and to reloading a weapon, and you can find yourself watching the reload animation several times while trying to clear out all of the ammo and armor from a locker). Rounding the weapons selection out are a laser cutter than can cut through chain link fences and chain locks as well as fire bolts at enemies, tesla grenades which are handy against the robotic mechs, and knives that can be thrown at or directly applied to enemies for silent stealth kills.

Speaking of stealth, often the best way to clear a small area is to sneak up behind enemies and dispatch them with a quick knife kill. This is especially true when a commander is present, as these specialists have the ability to call in a steady stream of reinforcements and quickly swing the odds out of your favor. The New Order can hardly be considered a stealth action game, though. Enemies who notice you will quickly lose interest if you can duck back out of view, and while they will react to the bodies of fallen comrades there's no way for you to move those bodies safely out of sight.

The enemy AI improves once the shooting starts, and enemies are smart enough to seek cover, vary their shooting patterns, and maneuver to a new position that will give them a better shot at you. However, they don't do any of that well enough to give you a challenge in small engagements. Most of the trouble you'll have in the game will come from the larger fights when the enemy has big numbers on its side or when they come in successive waves that leave you little time to resupply your ammo and heal your wounds.

Wolfenstein: The New Order has an interesting perk system that plays to how you play the game. The perks are grouped into categories and are unlocked by fulfilling accomplishments. For example, stealth-kill enough enemies with your knife and you gain the ability to throw knives. It's a good system that manages to provide you with the perks that will work best for you without requiring you to spend time digging through them and trying to decide which one would be most useful for you to unlock next.

The game is pretty linear, with levels that give more of an illusion of freedom than they actually deliver. There is room for some slight deviation from the predetermined course as you try to track down the game's wealth of collectibles and discover their secret hiding places. Collectors and completionists will enjoy tracking down all of the golden objects, Enigma codes, letters, and the like hidden in the game, although it will probably take two play-throughs of the game to get them all. You're forced to make a gut-wrenching decision early in the game that sets the course of the story down one of two possible timelines. These alternate "timelines" really amount to whether you gain the ability to hotwire circuits or to pick locks, so some things will only be accessible to you in one timeline or another.

I don't usually mention the sound in a game unless it's particularly good or bad, and with Wolfenstein: The New Order it's a bit of both. It's obvious that a lot of work went into the game's soundtrack and the variety and quality of the music in the game is impressive. On the negative side of the ledger is the quality of the sound mixing, which makes voices nearly impossible to hear during action sequences. I found it distracting to have to constantly divert my eyes to the subtitles when they were desperately needed elsewhere on screen because I couldn't make out what the muted voices were saying. It made me think of being at a concert with a bad sound engineer or watching one of those action movies that forces you to constantly turn the volume way up and back down again. 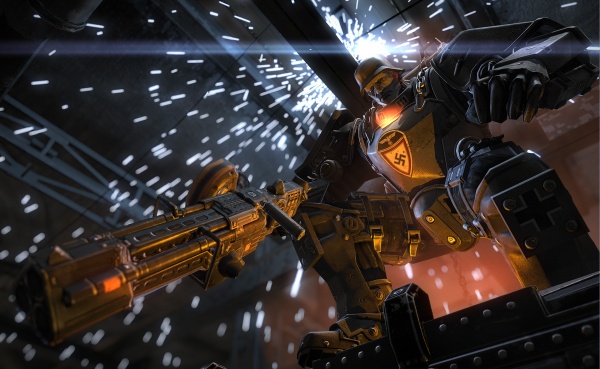 Lastly, I applaud the lack of multiplayer in the game. It's not that I don't enjoy multiplayer shooters, I do, but rather that I enjoy the single player mode as well. These days the single player campaign has been getting the short end of the stick more often than not (have you played the Titanfall 'campaign'?), and it's great to see a game put all of its resources into crafting a memorable single player experience.

Overall, I really enjoyed my time with Wolfenstein: The New Order. The intriguing setting and well-crafted story completely drew me into the game, and I enjoyed facing off against the secret weapons brought to life by the diabolical minds of Nazi scientists like robotic dogs, towering walkers, and cyborg mechs. I'll remember playing Wolfenstein: The New Order long after I've forgotten everything about generic military shooter number twenty-seven.