The Evil Within Review

I just finished The Evil Within a few minutes ago and I have to get on here and tell you guys all about it, but I can't stay long since I'm planning a second playthrough because the game is so great! If you enjoyed Resident Evil 4 then save yourself the trouble of reading this review and go out and buy The Evil Within right now. The Evil Within is the best horror game I have played in quite a while and it really shows that Shinji Mikami knows what he is doing when it comes to newer horror games. Unlike many of the recent horror games that try to scare a player constantly with jump scares, The Evil Within makes me feel uneasy with it's overall atmosphere and horrific imagery. I don't think I'll ever be able to look at barbed wire the same way again now that I've played this game.

The Evil Within starts out with the player taking the role of Sebastian Castellenos shortly after he is called to investigate a mass murder at Beacon Mental Hospital. After entering the hospital with his two colleagues, Sebastian is ambushed and knocked unconscious while performing his routine investigation of a murder scene. Sebastian awakes to a hellish reality full of strange creatures and surroundings way beyond what the mind can comprehend. He basically winds up in a Silent Hill Otherworld mixed with Hellraiser's version of hell type of area. This game has a very interesting storyline that kept me wanting to know what happened next. Unlike many other horror games that I have played recently, the game's files were actually interesting to read and contributed quite a bit to the story also.

The Evil Within is like a blend of Hellraiser, Silent Hill and Resident Evil all with a Resident Evil 6 style gameplay. The very first stage takes a player on a haunted house ride full of gore and horrid imagery and doesn't let up until the next chapter starts. The first few chapters are pretty short, but many of the chapters to come were quite long - there are altogether 15 chapters. The overall gameplay is very similar to Resident Evil 6's control style but the aiming and movement are much more precise and fit the action way better than what I saw in RE6. Sebastian will walk in whatever direction you hold the left thumbstick. The game has your standard aiming and shooting buttons, a melee button, crouching button and run button. The aiming and shooting are basically like your standard third-person shooter. You can move while shooting and you can shoot from your hip without aiming with the aim button. Weapons can be assigned to d-pad directions to pull them out quickly and the inventory can be accessed during gameplay to switch to other weapons - the game will switch to slow motion when entering the inventory.

One of coolest parts about the overall gameplay of The Evil Within is that it truly nails the survival aspect that we SHOULD see in a survival horror. The game limits a player greatly! The game puts a cap on all ammo that you can hold per gun so you can't horde all ammo and expect to be overflowing with ammunition by game's end. Not even the older RE games limited a player like this and it feels great in The Evil Within! The game isn't exactly punishing with its item and ammo drops, but they often appear in low quantity when found. There are some areas where you can farm items drops from enemies, but you can only carry a certain amount of each item, so that really doesn't matter much in this game. 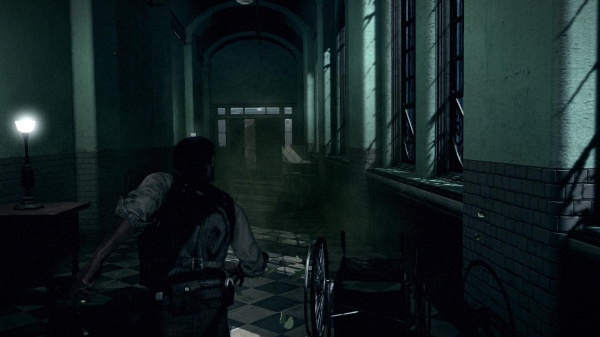 The game has an upgrade system where Sebastian can upgrade his attributes and weapon attributes by purchasing them with green gel. Green gel is dropped from enemies and found in the environment. The upgrade machine has a pretty cool look to it while upgrading Sebastian - it's like you give him a shock from an electroshock machine every time you upgrade an attribute. The upgrades do not make Sebastian overpowered to where the game seems easier thankfully. For example, your carrying capacity per item will very often only rise by 1 bullet when upgrading the capacity of a weapon and your damage per gun will not rise all that much when upgrading it's firepower. The game puts a great cap on just about everything that helps a player to feel the true survival aspect.

Once I saw that the game had a melee button, I immediately started thinking of RE5 and RE6's overpowered melees that can take the fun out of the game, but The Evil Within's melees are mainly used as a form of defense or a quick hit to an enemy in order to get away from it. You won't be killing that many enemies with melee attacks in the game that's for sure. There are no stuns that yield melee prompts when close to an enemy in The Evil Within - all melees are done from close range with the melee button. Sebastian will sometimes run across an axe or torch that he picks up from enemies and these can be used against enemies for an instant kill but they immediately break after using them.

Burning bodies with matches is a very helpful feature of The Evil Within. I'm sure you remember burning zombie bodies in the Resident Evil remake to keep them from returning as Crimson Head zombies later in the game right? In The Evil Within, you can burn seemingly dead bodies to make sure that they are not alive and will jump up and attack Sebastian later. Players can also knock down an enemy by shooting the enemy in the legs and then walk up and burn that enemy for an instant kill. As far as gun weapons go, Sebastian will have access to a revolver, shotgun, agony crossbow, sniper rifle and magnum during the campaign. He will find these weapons lying around in certain chapters and he can upgrade all of these weapons. The agony crossbow can be loaded with many different types of arrows that can stun, trap, freeze or damage enemies.

The enemies in The Evil Within are basically a type of zombie in overall appearance, but they act more like a human with demonic influence (they are called "Haunted"). They have glowing eyes and often have some form of mutilation on their bodies such as glass sticking out of their flesh or barbed wire wrapped around their heads and bodies. The game has a whole variety of other enemy types as well such as The Keeper (enemy that carries around a large hammer and has a safe wrapped in barbed wire around its head), the Sadist (large enemy with a chainsaw), AlterEgo (two-headed demon) as well as many others. The enemies' appearances are quite creative and they all have deep meanings (symbolism - much like in Silent Hill). The basic enemies act similar to Resident Evil 4's Ganados. They attack with their hands, melee weapons and later they will use guns. 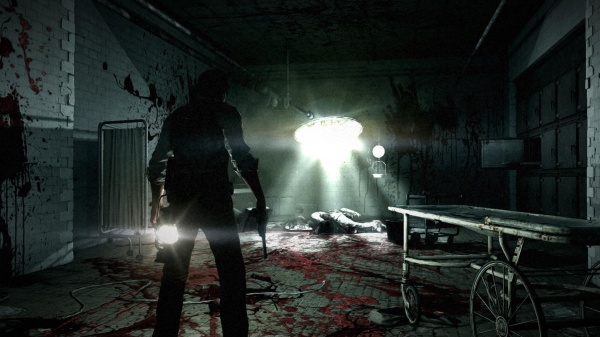 Much like Resident Evil 4, The Evil Within has a bunch of variety in its gameplay. There are areas where you have to sneak around, areas where you have to fight a whole mob of enemies, exploration areas, a few puzzles, chase sequences, shooter mini games and other forms of gameplay. You're not just simply running from one enemy encounter to another. The stealth gameplay in The Evil Within is quite well done. The game has a crouching button, which you'll want to use often. Sebastian can sneak up behind enemies and stab them from the back to instantly kill them. He can set up traps to ambush enemies with explosive darts from his agony crossbow. Enemies will sometimes have traps in the area, which Sebastian can disarm. Sneaking up next to a trap will give a player a disarm prompt to where Sebastian can quietly disarm the trap and gain trap parts in return. Trap parts can be used to build arrows for the agony crossbow.

The graphical look and overall atmosphere to The Evil Within looks spectacular and is truly aimed at the horror fan. If meat chunks, pools of blood, barbed wire-strapped objects as well as other horrid imagery types are your thing then this game has such sights to show you. The campaign has several different locations such as hospitals, old towns, catacombs, ruined cities and many more varieties - it's constantly mixing it up with different locations but the game maintains a smooth flow in between its areas. The Evil Within is displayed in a widescreen presentation at all times. I don't mind cutscenes in a widescreen format, but it doesn't look good to have an X1 or PS4 game with such limitations in presentation during actual gameplay. The music adds a lot to the atmosphere at times - there is one music track with some heavy bass sounds that greatly fits the areas it is played in. The voice acting seems natural during cutscenes as well. 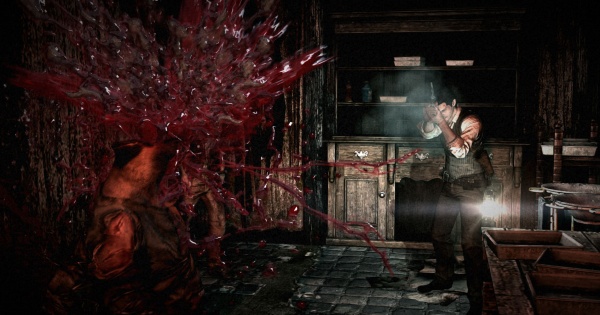 Shinji Mikami once said that his next project would be a "true survival horror game" before that project was called "The Evil Within" and he definitely delivered on that promise with this game. The game is less action-packed than RE4 but it still has plenty of action in it. The Evil Within is more for the horror fan than the action fan however. The game comes even closer to the old-school survival feel than the first two Dead Space games and RE4 and it's a blast to play through on Survival difficulty if you like a challenging feel on your first playthrough. From the start, The Evil Within has a Casual and Survival difficulty but other difficulty modes are unlocked once the game has been completed. There are several unlockables that are received once the game has been beaten and there is also a New Game+ for those wondering. If you're into survival horror games and want a horror game that feels a lot like Resident Evil 4 then don't pass up on The Evil Within - it does not disappoint for the horror fan.

The Good:
+ Horrid imagery and atmosphere that doesn't need jump scares to feel creepy
+ Fun gameplay that feels just as intense as RE4
+ A lot of gameplay variety throughout the game's 15 chapters
+ Deep story that is hard to figure out even after the ending

The Bad:
- The entire game is widescreen only
- Camera can get blocked by objects on rare occasions

Final Rating: 96%. The Evil Within is easily the best survival horror game I have played in a long time.