The "Black Flag" in Assassin's Creed IV: Black Flag is more significant than the "Assassin". For once you're not a member of the Assassins order, well, you are, but not really. Let's start at the beginning...

Edward Kenway is a man despondent over the fact that he can't provide his true love with the level of comfort he feels that she deserves. For her part, she's happy just to be with him, but Kenway is driven to make a better life for them. In early 18th Century Wales there aren't many opportunities for a man of limited means to make something of himself, so Kenway decides to head to the Caribbean to seek his fortune as a privateer. A chance encounter with an Assassin ends in Kenway's favor, and he assumes the identity of the Assassin and makes his way to Havana to complete a delivery and hopefully reap a great reward for his efforts. Thus begins Kenway's, and your, adventure as an Assassin and pirate on the Spanish Main. Well, again, not really...

If you've played an Assassin's Creed game before then you know all about the series' conceit that your adventures as Assassins throughout history are actually being experienced in the near future by people working for corporations with access to the hand-wavy pseudoscience of ancestral memories encoded in DNA. Black Flag is no different, and you're really playing the game as an anonymous employee of Abstergo Corporation recording memories from the life of Edward Kenway in order to make a video game based on his life. While this allows the game's developers to have a little fun through the annotations to the entries in the game's extensive database of the people, places, and events of the early 1700s, such as pointing out the anachronisms they have put in the game for the sake of entertainment, it's all a little too "meta" for me. I don't want my pirate adventures interrupted so that I can walk around some fictional corporation's offices - I can have that in real life and don't need it happening in my games. Anyway, it's not a major knock against the game, but I'd have enjoyed things more if they just let the pirates be pirates. 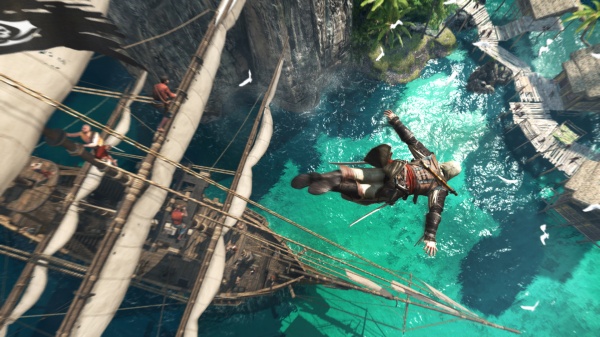 That water looks so inviting...

Replicating a pirate's life allows Black Flag to essentially give you two games in one. On land you're an Assassin, taking contracts for assassinations, thwarting the plans of Templars, and snatching treasures from the middle of fortifications crawling with guards. You'll also have to take care of some of the logistics required of a sea captain, upgrading your ship, recruiting crew, and the like. The latter is necessary because the other half of the two-in-one gameplay is spent at the helm of your pirate raider, the Jackdaw.

Kenway may have assassinated his way into the Assassins, but he's every bit as agile and deadly as a Master. Caribbean cities, towns, and islands all serve as your personal parkour playgrounds. You can climb up walls, scale towers, and leap between rooftops with ease, giving you many options when stalking your prey, or trying to avoid becoming the prey yourself. The game's climbing system makes all this possible and relatively easy as well, and it's certainly a rush when you are deftly escaping a contingent of enemy soldiers by taking to the rooftops of the city. At times it all works too well, though. Sometimes during chases you'll latch onto a ledge or beam that you had no intention of grabbing, but there you are, dangling in the air while your target is making his escape...

Many of the locations in the game have one or more special viewpoints; it could be a fortress tower, a church steeple, or even a particularly large tree at the edge of a cliff. Each of these is like a climbing puzzle mini game, with the reward for solving one a revelation of the map of the nearby area with all of the good stuff marked out for you. Climbing these gave me a bit of a feeling of Far Cry 3 d�j� vu, especially since the locations of local hunting grounds get marked on your map as well, in case you're in the mood for a little killing for the sake of crafting. Story events are clearly marked on the map and easy to navigate to, but I don't think that I ever made my way across town to a mission marker without stopping along the way to loot a treasure chest, figure out how to climb up to an elusive Animus data fragment, or resisting the urge to pick up an assassination contract that was on the route. Explorers and collectors will love every minute of it.

Out at sea there's even more to explore, as the condensed map of the Caribbean in which the game is set offers plenty of islands to explore and ships to encounter. Islands may hide buried treasure, collectibles to find, animals to hunt, and more, while the sea itself is home to shipwrecks, whales to harpoon, and ships to plunder. Sailing your ship is relatively easy - wind direction has a minor effect on your speed and maneuverability, but you don't need to know about tacking or have to worry about going dead in the water in this game. Different sailing speeds allow you to deftly maneuver your way into a bay or quickly pass the time as you speed to a distant destination.

As a pirate and Assassin, you'll find yourself in plenty of fights on both land and sea. On land you have access to both guns and bladed weapons which range from wrist daggers to cutlasses. Fighting in the game is timing based, and to be successful you'll need to pay attention to your enemies and know when to strike, counter, or overcome their defenses. The game marks an enemy who is about to strike with a small icon above his head, which gives you the signal to counter the attack (and will bring back memories of playing the Batman Arkham games to those who spent time with those games). Battles aren't always you against an army, and even when your crew isn't involved in the fight you may find some locals with a beef against the authorities joining the fracas so that they can get their licks in.

While there are guns in the game, this is the early 18th Century and they won't be your primary weapon. They're slow to use, not too accurate, and take forever to reload. You'll find that they work best to score an initial blow on an enemy before closing in to finish the job. The game lets you either aim your weapons freely or tag an enemy and then track him automatically to auto-aim. I liked doing things myself because it felt more authentic and sporting, but the assist is there for players who want it. 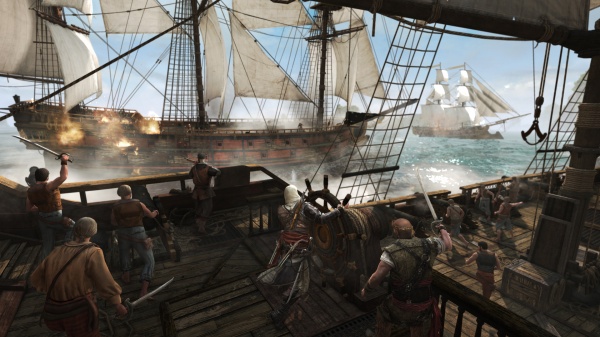 A broadside finds its mark

Battles at sea are naturally different, but the game makes the complex art of war at sea manageable. Each trigger corresponds to each bank of main guns - pull to ready, use the stick to aim, and then pull the opposite trigger to fire. Other weapons include long range mortars that are fired while watching your distant target through your spyglass and a swivel gun that is tied to the Y button and lets you get an extra shot in on an enemy while trying to maneuver to bring your main guns into position. While the weapons are easy to control, the challenge comes in using them well as you need to maneuver your ship to a position where you can unleash a full broadside on the enemy while preventing them from doing the same, and then contend with the sea as the waves raise and lower both your ship and your target. If you manage to disable an enemy ship, then you can then board it. Kill enough of the enemy crew in hand-to-hand combat and the prize is yours. The sea battles are certainly exciting, but I was bothered by one thing - once you switch to a boarding sequence nothing else happens at sea. If you're under fire from a couple of enemy ships, once you board one the sea battle is effectively paused and you don't have to worry about the other ships until after the boarding party finishes its battle. This felt especially odd because the cutscene that plays after the boarding party's victory shows your crew moving captured cargo and tending to your ship's weapons instead of worrying about the other ships that are still circling you.

While plundering ships is a great way to get cargo to sell in port or use to upgrade your own ship, you need to be careful how you pursue your pirating. Cause too much trouble in too short a time and your notoriety will bring pirate hunters and warships after you. Oddly enough, you can use captured ships to reduce your wanted level. Not sure how that's supposed to work, but it's an option given to you after you take an enemy vessel.

One thing in common between your adventures on land and at sea is that they look incredible. Subtle touches abound - the rustle of grass, the spray of sea foam over a ship's bow - and they all work together to make Black Flag's world more immersive and life-like. The long view distances made possible by the Xbox One are eye-catching and will have you pausing at viewpoints to take it all in. Storms at sea are particularly impressive, with driving rain, heaving seas, and lightning bolts all adding to the tension as you struggle to keep your ship afloat in the face of rogue waves and waterspouts. Black Flag is a gorgeous looking game, and it will be the one that you pull out to show your friends when you're showing them what your shiny new Xbox One can do. 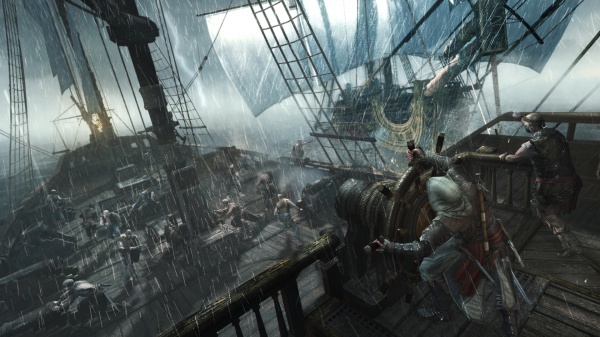 Both storm and battle rage

Black Flag provides enough single player gameplay to keep you occupied for months, but there is also a multiplayer mode here. Rather than go the death match route and be done with it, Black Flag multiplayer is based on the single player campaign's assassination gameplay. One team of players is the assassins while the other is the targets. The targets must blend in with the NPCs milling about the level while the assassins must sniff them out and apply a killing blow. The assassins earn points for killing players on the other team, but must avoid making mistakes and killing 'civilians'. The target players earn their points by staying alive - the longer, the more points earned. It's a fun diversion in short bursts, but not the kind of thing that you could spend an entire evening playing. Look at it as a nice little bonus on top of the single player campaign and not as a primary reason for getting Black Flag.

I've played all of the major titles released with the Xbox One, and the one that I've had the most fun with, the one that I keep going back to, is Assassin's Creed IV: Black Flag. If you get only one game with your shiny new Xbox One console, make it this one.