Freshly Frosted is a puzzle game that has you create donut production lines that take donuts from the oven, run them past the topping machines, and then deliver them to shelves. The toppings can’t be applied in any order, though, it must be frosting, sprinkles, whipped cream, and then cherry. Further complicating things is that you’ll need to deliver more than one type of donut, say, plain, frosted, and sprinkled. This means that you’ll need to creator a conveyer system that runs some donuts past some of the topping machines while avoiding others, and while conveyers can be merged, they can’t be split.

The game divides its puzzles into groups of twelve, naturally, each group forming a donut box of puzzles with a similar type of donut and machines. And to continue on the dozen theme, there are twelve boxes of puzzles, which gives you a total of 144 puzzles for those of you who don’t do math in your heads well. The puzzles start out simple enough, primarily being exercises in pathfinding as you try to wind your conveyer within each factory’s limited floor space. Most people will breeze through the initial puzzles, but the difficulty gradually ramps up from there, especially as new factory elements are introduced to the puzzles. Some of these include pushers, which automatically knock donuts of a specified type off of their current conveyer and onto the next one, splitters, which use paddles to alternately push incoming donuts onto two different conveyers, and even teleporters that send incoming donuts to a corresponding output gate, Portal style. If you’re having trouble with a particular puzzle, the game has a hint system which will add a few conveyer segments to the factory in their proper locations. It’s not enough to give the puzzle away, but it can certainly help get you started when you’re stuck. And while there are certainly a few puzzles that can only be solved in a particular way, after completing others I could see that I had a little leeway in how I placed the conveyers. 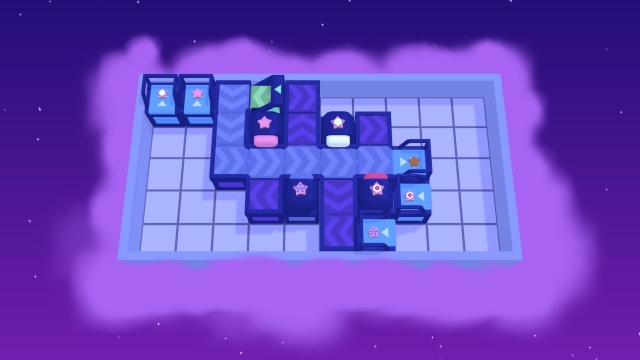 Once you think that you have all of the pieces in place, a push of a button will bring your factory to life and you can watch the donuts wind their way through your production line. For those of you who are a bit impatient, there’s also a speed option that will run the donuts through at high-speed, but you’ll miss out on the fun of watching your factory make donut creations in time with the game’s delightful background music. If your production line becomes stuck, or it fails to deliver one or more of the required topping combinations, the game will let you know and you can stop the factory and try again. Clearing up mistakes is pretty easy – you essentially have an undo button that will continually remove the last piece placed and you can select and delete, or change the orientation of, any segment that’s already been placed. You can even quickly wipe everything out and start from scratch. If you truly become stuck, the game will allow you to skip the current puzzle and move on to the next, which is a nice feature since I’m sure most gamers have at some point stopped playing a puzzle game altogether when a frustrating level has blocked their progress in the game. Once your factory can deliver the required donuts, you’ll move onto the next puzzle. If the puzzle was the last in a box, you’ll be treated to a flyover of all of the puzzles that you completed in the box and be pleased to see that they are all still busily producing donuts for grateful customers.

The game’s puzzle progression is just right. Each box presents a more challenging set of puzzles than the last by introducing new elements, while the progression of the puzzles within each box take you from an introduction to those new elements through complex situations filled with a combination of factory machines that you’ve encountered in the game up until that point. Some of the puzzles certainly took me a little time to complete, and I’ve had to tear everything down and start from scratch on a puzzle more than once, but overall I never found myself completely stuck or frustrated that the puzzle required overly complicated or non-intuitive solutions. Once you reach that “aha” moment, start laying down conveyers, and then sit back to watch your factory churn out donuts, you’ll definitely gain a sense of satisfaction and find yourself looking forward to the next puzzle down the line. 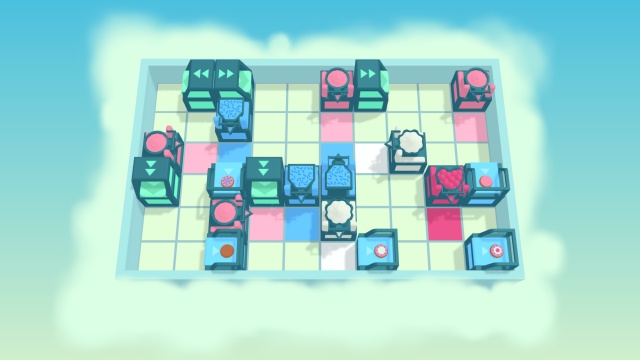 You might think that a puzzle game built around factories would have an industrial theme, but that’s not the approach Freshly Frosted took. Instead, the game’s levels take place in a serene, ethereal space as the factories appear to float atop pastel-colored clouds. A narrator introduces each puzzle with dreamy musings on the nature and deliciousness of donuts. It all helps to make what is essentially an industrial puzzle feel light, dreamy, and relaxing. Well, except for the puzzle-solving portion of your brain, that will still get a good workout.