Paratopic is a first-person horror game developed and published by Arbitrary Metric. The game is a rerelease of the original 2018 game that released on PC. Unlike other horror games with more consistent storylines, Paratopic has a bunch of random story segments that vaguely connect with each other. The narrative is purposely shown out or order while playing. Players must piece together what is happening.

This game is literally all over the place from start to finish. It does have a “story”, but the story is very fragmented. Segments transition very suddenly. For instance, you might be in a convenience store looking at items on shelves and then suddenly, you’ll be in a car driving somewhere before you are transitioned to a forest area while armed with a camera. Each area has a few objects or people to interact with. In the forest area, you can take snapshots with your camera. It seems that most places have some sort of goal to reach in order to transition to the next area.

The visuals to this game purposely look like a 3D PS1 title. Character models have smooth pixelated textures on them and so does the environment. The look of the game is actually quite fitting and it can get disturbing at times with what it will show. It did make me feel uneasy a few times. The music is fantastic. There are many atmospheric tracks in this game that sound really good. Character speech is limited to gibberish or some type of gibberish that sort of sounds like the subtitles on the screen. The gibberish is actually fitting and adds to the weirdness the game is going for. The overall sound effects are good to and add to the creepy atmosphere. 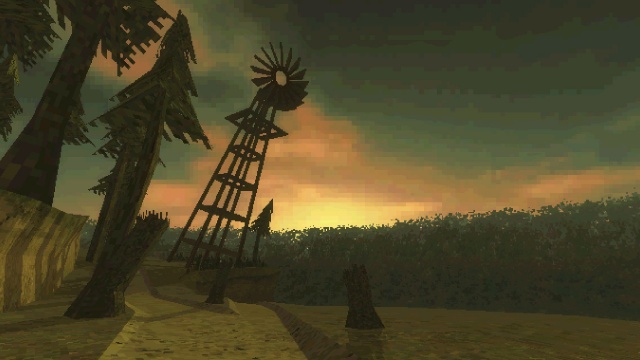 One major problem that I have with the game is that there is too little to do and if you’re not fully immersed in this game, it will get boring fast. The car rides in the game feel totally useless. All you can do is mess around with a radio while in the car. The radio can be switched to one of two stations or turned off. You can also look back and forth at a suitcase in the passenger seat and it may disappear or turn into something else. I literally went the restroom (in real life) during one of the car rides just to have something else to do while it continued.

Overall, the game does not have much to it. It tries its best to achieve the randomness of a David Lynch movie, but just like his movies, you either love it or hate it. With me, I do not like Paratopic very much, but I do see where a person might be interested in it and give it a few playthroughs. One playthrough was enough for me and I was done after that. There are a total of 20 achievements to gain and I only got 10 of them on my first playthrough. The game roughly last around 40 minutes to an hour. There is no way to save and the game warns you of this from the start. The game is an interesting try for the curious, but be forewarned that you’ll only play it a few times before shelving it most likely.

The Bad:
- What is going on?
- The driving segments feel useless
- Not much to the game really

Final Rating: 60% - Paratopic may have a fantastic soundtrack, but it is definitely a love it or hate it type of game.