Mayhem Brawler is a side-scrolling beat’em up developed and published by Hero Concept. The game was developed using the Unity game engine and closely resembles the recent Streets of Rage 4 (SoR4) in many ways. This urban fantasy-themed brawler features a comic book style appearance and quite an enjoyable soundtrack. If you’re familiar with beat’em ups, you’ll be able to easily pick this up since it has just about everything that you can find a few new ideas.

The three main characters in Mayhem Brawler are Trouble, Dolphin and Star. The story starts with all three of these officers on a routine call and they find themselves in events that will alter the city. All three officers are in a group of super-powered law enforcement, so they each have their own special powers. Trouble is the “middle of the road” character with claws, Dolphin is your standard powerhouse, though slow, he takes more damage from enemies than the other two, and finally Star, who is the fastest and has telekinetic super powers. All the characters are fairly well balanced. They all have jump attacks, grab attacks and a rush attack along with super moves. 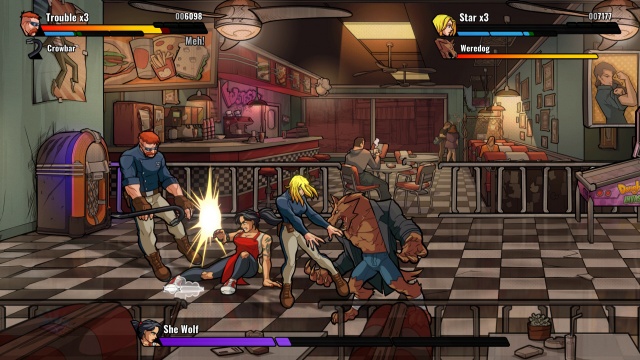 Unlike SoR4, Mayhem Brawler has its own dedicated special move bar that refills as you fight enemies. It takes one bar of special power to perform a special move of which you have three bars. You can find items that replenish the special bar just like you can with health. The game also has status effects that can be inflicted on enemies and that enemies can inflict on you. One status effect is to lower defense so you take off more damage. There is one that makes it to where enemies cannot perform a wake-up attack. There is also one that causes enemies (or the player) to take damage whenever they attack an opponent – this ability is annoying when inflicted on a player since you just basically have to move around the area and wait for it to end or suffer damage from hitting an enemy.

As for the rest of the game’s mechanics, if you’ve played Streets of Rage 4, you’ll feel right at home since this game takes many ideas from it. You have a combo meter that will continue to ramp up until it is broken by an enemy hit or when you stop attacking enemies. So long as the combo is not broken, you’ll gain an increased score at the end of the combo. You can dash and perform a special dash attack or jump attack. Each character has a standard combo that you can stop at any time to end the combination with your own manual attacks. The game also encourages juggling. Melee weapons in this game are made for juggling – every melee hit allows you to spam melee attacks again as your opponent falls back.

Speaking of weapons, this game has some of the most boring firearm attacks. You would expect a firearm to take off a lot of damage per hit, but the guns in this game only take minimal damage and set up bullet juggle. Melee weapons take priority over firearms since you can more easily spam melee hits for enemies and have it take off a bunch more than spamming gun blasts. 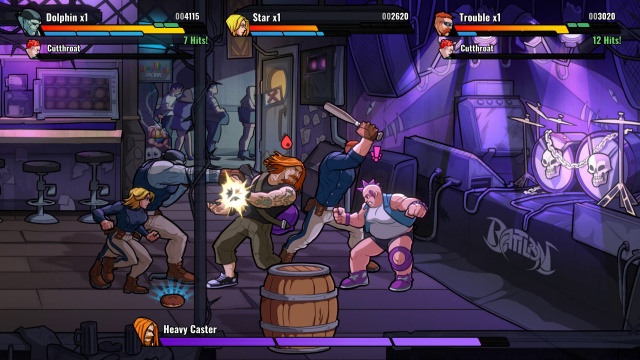 Melee weapons are highly useful when it comes to taking on bosses at the end of each stage. You’ll fight against bosses that have a huge life bar spliced up into three bars. The three bars represent a boss’ phase of attacks. Each boss will get more and more aggressive as they enter a new phase. Bosses start out letting you hit them with minimal retaliation then they will ramp up and start performing attacks more often, and then, for the final phase, they will start to perform attacks that you will have to guard or dodge a certain way. Later bosses can get super cheap with some of their attacks that will have you in block stun while facing one way while other enemies attack you from the other way (easily hitting you). Each boss requires a certain setup to deal with their final phase move. One boss actually breaks out of your attacks and starts to attack during the middle, so you have to hit that boss as minimally as possible. Each boss calls in extra enemies per phase, which can really add on the pressure.

The game can definitely get hard. You only get 3 lives per stage. Each stage opens up with a comic book style story with Twitter posts to the right of it. The dialogue is all voiced as it appears on the screen. You can scroll through the Twitter posts and read them while watching the comic book panels appear on the screen. The overall voices and stage music are done pretty well. The soundtrack is not as memorable as SoR4, but it gets the job done.

One of the worst parts of Mayhem Brawler are the controls. The controls are not fluid for all attacks. The dashing attack does not come out easily. Tapping forward, forward on the D-pad/thumbstick doesn’t always make the character dash. Some attacks are simply delayed, such as Trouble’s normal jump attack. The game is still fun to play, but it certainly isn’t as fluid as SoR4.

The animations for all the characters look really nice and so does the overall visuals of the game. It has a good variety of enemies and boss enemies that are constantly being switched up as you enter new stages. When going to the next stage, you’re able to choose between two stages (choose story paths) that will offer different enemies and a different boss depending on your decision. The game has three possible endings.

Mayhem Brawler is a decent beat’em up, but everything it does, Streets or Rage 4 does better. It’s a decent alternative to SoR4, if you’re bored with that game, but it just doesn’t have the replay value or the fluid controls that you’ll find in SoR4. It could be an interesting try for beat’em up fans, but I highly suggest that you try it before you buy it. From the trailers, the game looks fantastic, but once I started to play it, the control flaw was obvious as I continued to play. Even though bosses, can be frustrating, they can be overcome with patience, but some of them can surely get very cheap no matter what exploits you find.

The Bad:
- Overall controls could be smoother (inputs are delayed at times)
- Cheap boss attacks on many bosses
- No online co-op
- Everything this game does, Streets of Rage 4 does better

Final Rating: 60% - Mayhem Brawler looks great, but it’s not all that fun to play for long.