Stubbs The Zombie in Rebel Without a Pulse Review

Did you enjoy the Return of the Living Dead movies? Does the moaning and shouting of creatures craving “brains” make you smile? If so, you’ll most likely enjoy Stubbs the Zombie in Rebel Without a Pulse. This dark comedy horror action game is developed by Wideload Games and published by Aspyr Media. The game was originally released in 2005 for Xbox and PC and now we have an HD rerelease on PS4, Xbox One, and Switch. I never did get around to playing the game back in the day so this HD version is my first time sitting down with it. I must say, it does live up to the cult following behind it overall.

The gameplay to Stubbs is truly unique. It’s a lot of fun to play as the zombie for once instead of a human fighting off the zombies. Players start out playing as Stubbs and have to seek out human brains. You can either eat the brains of a human or kill them with one of your other gory kills and that will turn the human into a zombie. The new zombie will join up with Stubbs, as will any other zombie that he creates, and they will all follow him in sort of a Pikmin type setup. The zombies can be controlled somewhat – with the tap of a button, you can make them meet up with you and they will automatically start attacking and devouring any humans in your current area. 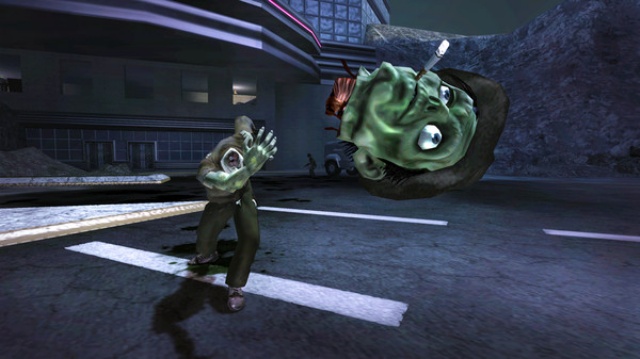 As you progress, you’ll unlock new abilities. Stubbs has explosive abilities, such as an explosive organ that can be thrown and he also has the ability to control humans with his detached hand. Stubbs will toss his hand and you’ll have to sneak up on a human then attach to their head and will gain control of them for a while. The hand mind control can get rather useful with you having to take control of humans in order to open doors or kill other humans at a fortress style wall. Human enemies start out rather easy but get tougher with the new weapons that they gain as the game goes on. The game appears open world with its big environments, but overall it’s very linear – each stage is always get from point A to point B with a little bit of detouring along the way.

Creating zombies doesn’t seem like much at first, but it ultimately becomes your most useful ability. Having dozens of targets on the screen allows you to draw attention away from Stubbs so that you can sneak up on unsuspecting enemies or lurch by them to get to the next area. Later stages get super intense with the amount of firepower that humans have so you have to get creative in your approach instead of simply tanking your way through each stage.

The game uses an autosave system to save your game and it will do so without warning at times. This can be really bad in the later stages, since it might save when you don’t have any more zombies around to help you fulfill your goals – it certainly can happen – forcing you to restart the entire stage from the beginning. The controls to the game and overall movement feel very floaty. If you played games back in the PS2 era (around the time of this game), you’ll know exactly what I’m talking about. Stubbs’ jumps and falling from any ledge will make him float down to the ground. Vehicles that you can pilot often have incredibly loose or outright bad controls and feel incredibly floaty. Every attack feels slow and spammy as well. Stuff like this didn’t look so bad back in the PS2 era, but it goes to show that this game hasn’t fully aged well. 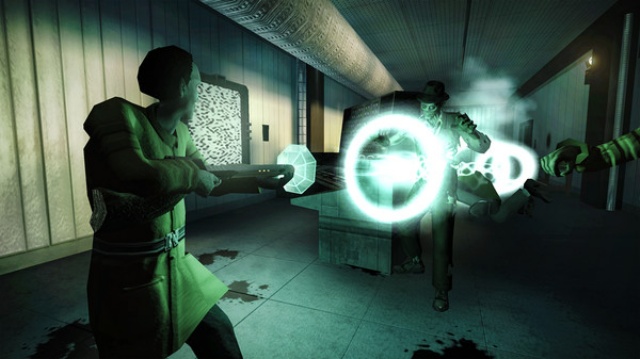 The game has a very 1950’s vibe to it and it runs with that look very well. The music and overall sound effects sound like stuff taken from the 50’s. There are even some enemies later in the game that spout out 50’s phrases while attacking – they are annoyingly hard but brilliant sound-wise. It’s not uncommon to see robots and weapons that look like they were taken out of a 50’s sci-fi movie. The game surprisingly has a pretty interesting story to it overall – it’s rather suspenseful to watch Stubb’s backstory unfold. The overall graphics engine is pure PS2 era visuals – they hold up well overall though. Characters have a simple yet very lively look to them.

While the Stubbs the Zombie in Rebel Without a Pulse has its fault, it’s still rather enjoyable. Any game that keeps me involved until the end deserves its credit nowadays since games don’t often hold me over that long anymore. The game gets frustrating and sometimes the autosaves can screw you, but it’s worth a try for those that are curious. If you love horror comedies, definitely give this game a try since it will be right up your alley. Zombie fans should give this a shot as well since its easily one of the most creative zombie games that I have played.

The Bad:
- The game hasn’t aged well in some aspects
- It’s possible to get stuck in later stages because of the autosave saving at the wrong time
- Can get somewhat repetitive

Final Rating: 75% - Turn your brain off and get ready to enjoy some good ole’ zombie munching, but just make sure it’s still there afterwards!