Early on in the NES era, beat’em ups were always my genre of choice. Renegade, Double Dragon, River City Ransom, P.O.W were some of my favorites along with just about any others you can think of. I often have a soft spot for beat’em ups no matter how mediocre that some of them may be. Jay and Silent Bob: Mall Brawl is a new 2D beat’em up that mimics the glory days of 8-bit brawlers. The game has recently been released for PS4 and Xbox One and has already been available for Nintendo Switch and PC for the last few weeks.

Mall Brawl was originally a bonus game available to backers of the crowdfunding campaign for the Jay and Silent Bob: Chronic Blunt Punch. It’s said to be the companion app to the upcoming Chronic Blunt Punch. Anyway, for little reason, Jay and Silent Bob battle their way through mallrats, security guards and other baddies to find their way out of the mall and back to the Quickstop. The game plays a lot like River City Ransom at its core but it’s more of a solid action beat’em like Double Dragon’s stage to stage style gameplay rather than having RPG elements. Even though it plays more like River City Ransom, it definitely wants to be a Double Dragon – just look at that beautiful cover art for this game and compare it to Double Dragon 2 NES cover art! 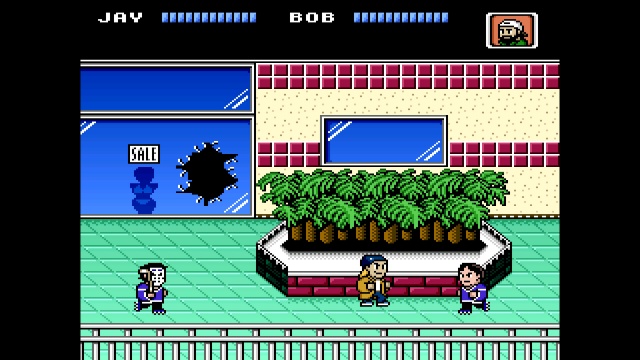 The game is extremely simple when it comes to controls. You have your punch, kick, jump and tag in buttons. Punch and kick multiple times to perform combos. The game also has the hair pull into knee/throw that Double Dragon games are well known for. While beating up on enemies, you’ll gain stars that will allow you to perform more powerful moves. Jay and Silent Bob can pick up a variety of weapons to use against enemies. Battle through a stage of enemies and you’ll face off against the big boss enemy that appears at the end of each stage. All baddies have some sort of weakness that you can find to make battling them easier. The game actually gives you hints here and there on how to defeat enemies better.

Players get to choose between Jay or Silent Bob at the start of the game, but you actually get to control both. Both of them have their own unique combos. With the tap of a button, you may switch between the two characters during gameplay. The switching actually gives a bit of strategy to the game since they both have their own separate life bars. Switching in one of the characters allows the other characters a chance to recover. The game seems to not allow for cheese such as waiting for your partner’s life bar to recover while standing and doing nothing – you have to be in battle for the partner to recover. The recovery only goes up to 50% health. If you are knocked out, your partner comes in to take over while the other recovers. Get knocked out while your partner is too low in health and its game over. This partner system is very cool for a beat’em up. If you play locally with two players, you don’t have partners since are both either controlling Jay or Silent Bob.

The game is quite hard, which is good, but it’s hard for some of the wrong reasons at times. To start off, the controls feel cumbersome. It seems like it is so hard to simply turn during combat and I also have problems trying to dash (double tap forward) when I want to. Enemies can easily overwhelm you in this game and there is little you can do to fight back. Enemies move at the same speed as your walk speed, and they immediately follow when you try to move away. When surrounded by two enemies, you have no power move to instantly knock them off. You do get a power move during a combo, but you have to go so far into the combo to activate it, which allows enemies to attack you before you can even get to that power move. You can find ways around the multiple enemy problem if you maneuver around the screen enough but it’s always a threat from stage to stage. It’s very true that old NES beat’em ups did not have power moves to knock off multiple enemies, but they also didn’t have enemies that chase you around the screen so aggressively as this game has. I also find it odd, that I can be hitting two enemies and suddenly the game stops allowing me to hit one of them, which makes them attack me. It’s like the game switches back and forth between me being able to hit two enemies at once and then suddenly switches to only being able to hit one in a group – this is quite noticeable when using a weapon against two enemies. 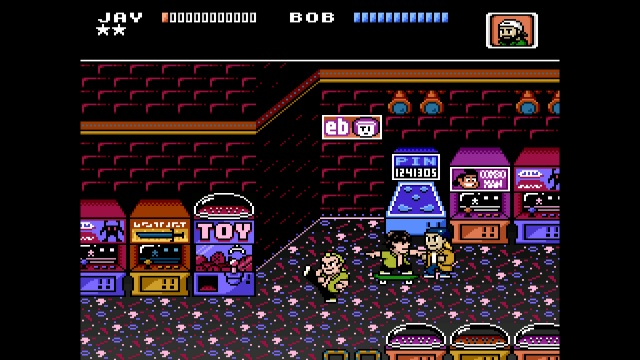 Even with all my complaints about the controls and overall combat against multiple enemies, the game is still fun to play. It’s definitely got a lot of references to classic beat’em ups and its overall fun when the frustrating problems aren’t there. With practice you can learn to maneuver enemies on the screen to avoid them ganging up, but it can certainly be hard. Fans of hard games that like to stick with them through all the trial and error will get the most out of this game. If you expect to pick up the game and start kicking ass through the first stage, you’ll be in for a surprise since its not very forgiving at all, even in the earlier stages. Thankfully, the game has unlimited continues, so once you fail, get ready to start the current stage over and try again!

The Good:
+ The character switching is a nice touch
+ Has many references to classic beat’em up titles

The Bad:
- Controls feel cumbersome
- It’s too easy for multiple enemies to surround you and its hard to fight back against this
- No online co-op

Final Rating: 65% - Jay and Silent Bob: Mall Brawl is a decent beat’em but it takes a lot of patience to truly enjoy.