If you were a kid in the late 80’s/early 90’s, you likely spent a good bit of time playing beat’em ups in arcades or at home. Along with Double Dragon and Final Fight, Konami developed the original Teenage Mutant Ninja Turtles (TMNT) arcade beat’em up classic. The game was in nearly every arcade around and was the main “go-to” game at entertainment places like Showbiz Pizza and Chuck’e Cheese. Teenage Mutant Ninja Turtles: Shredder’s Revenge is a new turtles beat’em up, developed by Tribute Games and published by Dotemu, that keeps the faith of those old school brawlers from long ago. In a good number of ways, it’s every bit as good as Konami’s TMNT games.

The game begins with Bebop and Rocksteady stealing some equipment from the Channel 6 news building. It seems that Shredder and Krang once again have a twisted plan that they are setting into motion and that’s when our heroes jump into action to stop the evil Shredhead! From the start, players have the choice of a Story mode or Arcade mode with multiple difficulties of play (Easy, Normal, or Hard). You get to select between a total of six characters (Leonardo, Donatello, Michaelangelo, Raphael, Splinter, and April O’Neal). Each character has their own unique feel to them and different attributes. All characters level-up as you play them as well. The game can be played locally or online with up to 6 players.

The characters all have different move sets. They all have their own unique combos, uppercut attacks, super attacks, and other moves. The overall combat is very faithful to the old Konami games, but there are many more options left to the player this time. There is now a dodge button and you can perform attacks after the dodge. Like Streets of Rage 4 (SOR4), there is a recovery move that can be done from a knockdown or throw. Each character has their own super attack, which charges while attacking or can be fully charged from performing a taunt. During co-op play, there are also some special moves that players can perform along with other players. The overall feel is familiar yet advanced, which is good. The game is not as in-depth as Streets of Rage 4, it’s more of a button masher with a few extra advanced techniques. Basically, it’s a pick-up and play type of game no matter what skill level you are or want to be. 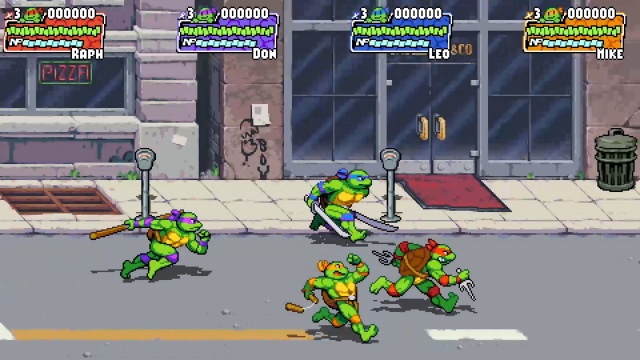 All characters have the ability to grapple and toss enemies back and forth into the ground and toss them at the screen. Fans of Turtles in Time will definitely remember the “toss enemy toward the screen” type of throw and yes, it does have its use during a fight eventually. The game uses sprites just like the earlier TMNT games. Sprites become pixelated when too close to the screen. When you toss an enemy toward the screen, you get that incredibly pixelated “Super FX chip” type of look, which is very reminiscent of Turtles in Time.

Stages are comprised of a lot of familiar territories from the past games. Naturally, you’ll be going through streets and Dimension X territories before long. There are nods to certain other games, including Simpson’s arcade game and classic turtles games, here and there. In Story mode, you move in between stages with the turtle van or another vehicle. Stages are sometimes short, and sometimes long. There are 16 stages total, which makes for a very lengthy Arcade mode playthrough. Each stage offers a certain number of challenges and hidden items to perform/find in the stage. Challenges range from easy to quite hard. Certain characters and items can be found hidden in some stages. After finding characters, they will have a collectible mission for you which you can turn in for extra points.

The enemy variety is just as good as the Konami games. You have your basic type of foot soldiers and tons of other varieties of them – foot soldiers with plunger guns, foot solders with katanas, foot soldiers with sais – and they all dress in different color outfits. Along with the foot soldiers, there are also other returning enemies (such as pizza monsters, rock soldiers, mousers, etc) and some new enemies (such as Triceratops mutants and others). Each stage has its own boss which range from classic bosses to movie references and even to some very obscure TMNT action figure characters that I don’t recall seeing in the show. Many enemies in the game have a unique strategy that you’ll have to use for defeating them, including normal enemies and bosses. For instance, there is one robot type of enemy that can only be stunned with a jump kick. 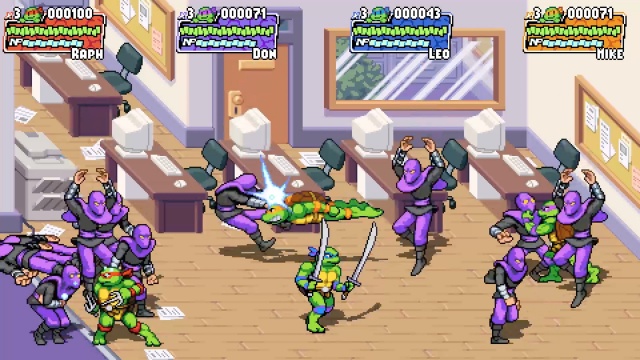 The overall difficulty is just right. Normal mode is comfortable but it can get a bit hard at times. The hardest mode seems to mainly increases the damage, which makes finding pizza pickups a necessity. I do feel the game could have a type of ultra difficulty however. Once the game is completed there is one extra character that is unlocked. You can replay through the story mode from your saved progress or start a new story.

The Arcade mode is a stage-by-stage progression through the story mode stages with limited lives and continues. In this mode, you can gain access to extra lives by scoring a certain number of points. Arcade mode is more like the old home console mode. All modes can be played by yourself or online with up to 6 players. The game features rollback netcode and even has the option for crossplay with other platforms.

The overall soundtrack to this game has some really great tunes in it. The stage music is good and there are also many songs with lyrics sprinkled throughout the game. The music can truly create some great moments in this game. The voice actors are great, too. You can easily tell that the returning cast from the old TMNT series are present to voice their respective characters. The original turtle voices are so iconic and they are all here!

If you’re a fan of the old TMNT arcade games, you’re a shoe-in for liking this game already – it was practically made for you! If you’re not a fan of the TMNT arcade games, well, you need to become one, because this co-op beat’em up is too good to pass up and everyone needs to give this game a try. It’s clear that the developers spent a lot of time with the old games to help them create this nearly perfect recreation of old TMNT beat’em ups. Teenage Mutant Ninja Turtles: Shredder’s Revenge is the ultimate party game for when friends are over or just whenever you want to go online and kick some shell.

The Good:
+ A game that totally keeps the spirit of the original TMNT games
+ Familiar beat’em up gameplay with new twists
+ Very replayable
+ 6-player online co-op with rollback netcode and crossplay!
+ The soundtrack is fantastic

The Bad:
- Can get repetitive (just like all beat’em ups)
- Needs a few more unlockables (maybe more characters and another difficulty)

Final Rating: 90% - If this is what it looks like when Shredder takes his revenge, he should really seek vengeance more often.