Werewolf: The Apocalypse – Earthblood is an action RPG developed by Cyanide and published by Nacon. The game is based on the Werewolf: The Apocalypse table-top role-playing game and is part of the World of Darkness series. The game was released for all the newer consoles (PS5 and Xbox Series) along with last gen consoles and PC. The game follows the same type of story that you will find in the RPG storyline for the table-top RPG – environmental werewolves versus an evil corporation bent on terrorizing the planet.

The story starts with Cahal, a werewolf from a tribe of other Garou, that seeks to bring down the Pentex corporation. After losing his wife and a fellow Garou, he leaves his pack and lives on his own for five years. While out and about infiltrating an Endron base, he learns that they are planning an attack on his former pack at Tarker’s Mill. Cahal rushes back to his former pack and helps them to protect their home and reunites with many familiar faces and rejoins the fight. 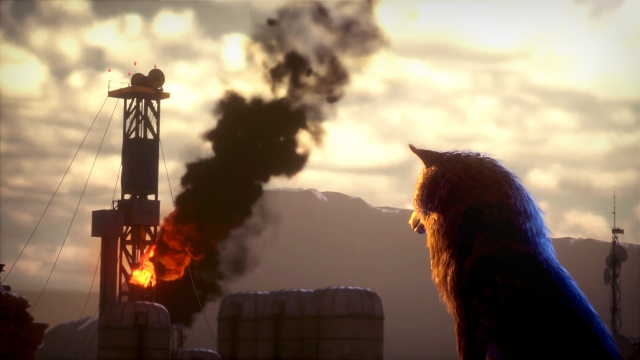 The story is overall decent. The characters are ok, but there is little feeling to any of them. I really don’t care if the characters live or die. The game is described as an “RPG” but it has very little RPG features in it. If you’ve played other RPGs by Cyanide, you’ll be familiar with their dialogue choices and how they can lead to extra dialogue and extra gameplay segments – basically changing the story a bit. With Werewolf, the game has dialogue choices, but they only seem to affect a bit of the dialogue at that moment and that is it. The story goes one way and doesn’t deviate much, outside of side missions, to its main goal. There are two available endings to the story that you can decide between toward the end of the game.

The majority of the game is divided into stealth and action segments. The cool part about this setup is that you get to choose how you play for the most part. You can go the stealth route and sneak by enemies and stealth kill them while others are not looking. Playing this was will build up your rage per stealth kill and allow you to weaken your enemy’s defenses. Cameras can be shut-down, doors can be unlocked and Cahal can strip down control panels to malfunction enemy doorways so that they are limited when calling on reinforcements. You also gain access to a crossbow that can be used to take down enemies from long range.

While sneaking around, Cahal can turn to his small wolf form (lupus) and sneak by enemies or sneak up on enemies easier. His low profile in wolf form is excellent for sneaking through areas and you can upgrade your attributes to make him even harder to see. The lupus can go through vents to reach hidden areas that give you advantage while playing it stealthy. The overall stealth is about like what you would find in Splinter Cell: Conviction – overall fun, but not your true Sam Fisher gameplay. You can play the majority of the game in stealth if you want. Some areas are forced action and forced stealth however.

When you’re discovered or sick of playing stealth, you can instantly morph into Cahal’s Crinos (werewolf) form. The Crinos is a walking powerhouse and literally paints the entire area in blood while rampaging. Players can switch between agile and heavy stances while controlling the Crinos. Agile has a lower attack and defense but it’s much quicker at maneuvering around the area – its main walk speed is to run. The agile stance allows you to more easily dash toward and away from enemies to get in quick attacks and dodge upcoming attacks. The heavy stance has a higher attack and defense, but slower overall movement making it like a tank. Both stances can heal and have their own unique abilities that you can use at the cost of rage.

You’ll be receiving extra rage and building up your frenzy gauge while battling enemies in Crinos form. At the cost of rage, abilities are good at singling out enemies, such as leaping at a sniper on a high platform while using the agile stance. Once your frenzy gauge is full, you can go into frenzy mode where the Crinos will let loose a powerful roar and knock back enemies. The Crinos is near unstoppable in frenzy mode at the cost of not having any abilities.

The combat to the game is overall fun, but it lacks strategy as the game continues on. From the beginning it looks strategic until enemies start to spam the battlefield with attacks. This led me to start spamming my own attacks, which worked quite well depending on the attack that I used. Stun locking on both sides (CPU and player) plays a big part in getting major damage during combat. From the beginning, the combat looks easy, as in you seem overpowered, but toward the end, the enemies really start to pick up their number and attacks which leads to some very hard battles at times. As already mentioned, you can make battles easier by using stealth, but stealth becomes really hard toward the end – it actually looks impossible at times. The game has a few boss battles sprinkled throughout the campaign. Boss battles are usually well done and have good strategy to them. 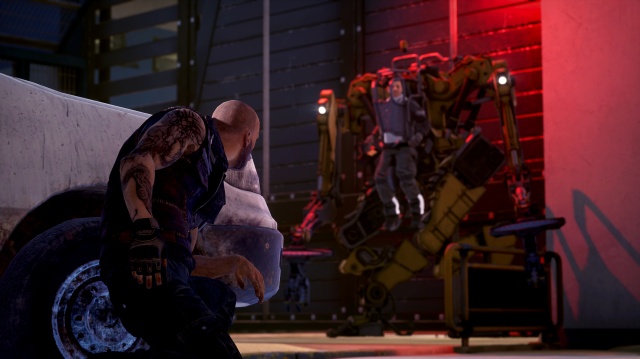 The game runs at a smooth framerate most of the time. It will slow down at times when too much stuff is in the area but never got down to crawl. The overall graphics are decent, but the character models in the game are often horrible. Cahal is the most detailed of all the characters (especially that hi-res sleeveless jacket). Main characters are a step down from Cahal and characters below them are near PS3 first generation level character models. The hair looks ugly on just about every character and the overall design of the lesser characters is so very basic. Even the werewolf forms have differences – Cahal’s werewolf form seems more detailed than others. Stuff like this makes it hard to actually connect with characters. The character models are some of the worst parts of this game for me. It’s also very noticeable that this game has no collision animations for walls. When moving up against a wall, especially in wolf form, you can see parts of your character clipping through the walls very often. When in wolf form, you can approach a wall or other object with your head toward it and stick the wolf’s head through the wall.

The voice acting and overall sound are done well for the most part. Cahal and other main characters have good voices but some minor characters sound a bit off. The overall Crinos transformation sequence (mainly when reverting back) is done well – the animation matches the look the game is going for. A loud growl is heard as the Crinos falls to its hands and knees and pixels start to move off Cahal as he gets smaller and reverts back to human – it’s pretty cool looking and sounds great!

Many collectibles (spirits and files) are hidden throughout each area. Spirits can be found to get spirit points that will help players to level up their attributes. Spirit energy is also obtained from completing objectives. The game is pretty much rigged to where you can’t grind out spirit points. Despite the poor character models and lack of RPG elements, I had a lot of fun with my time with Werewolf: The Apocalypse – Earthblood. The game has an overall exciting campaign to play and I enjoyed the overall world that the game has to offer.

The Good:
+ The werewolf fighting is very chaotic and bloody
+ Decent story
+ Choice of stealth or action for most battles

The Bad:
- The character models often look really bad
- Not many RPG elements to the game
- Dialogue decisions don’t have much impact
- Characters lack development and feeling

Final Rating: 75% - An overall good action game, but the “RPG” feel is weak with this one.