Resident Evil Village is the eighth numbered installment in the main series of Resident Evil (RE) and the ninth overall game when counting Code Veronica. From the first trailer, we could see the RE4 inspiration in the locations and certain other aspects. RE Village is basically a love letter to fans of RE4. Instead of taking on the total horror approach that we saw in RE7, RE Village eases up on the horror, but still has it included at times along with tons of action and variety gameplay that we witnessed in RE4. If you’re a fan of RE7’s gameplay, you definitely will like this since it takes the RE7 engine to the next level.

RE Village takes place three years after the events in Dulvey, Louisiana from RE7. Ethan and Mia are now in Europe where they are living out their life with their newborn daughter Rosemary. After some surprising events from Chris Redfield’s group of soldiers, involving the abduction of Rosemary, Ethan wakes up near a crashed transport truck and makes his way to a nearby village. The village is being attacked by Lycan creatures. Before long, Ethan is kidnapped by Mother Miranda and her squad. Ethan manages to escape and must fight against the lords of the land in order to find Mother Miranda and his daughter. 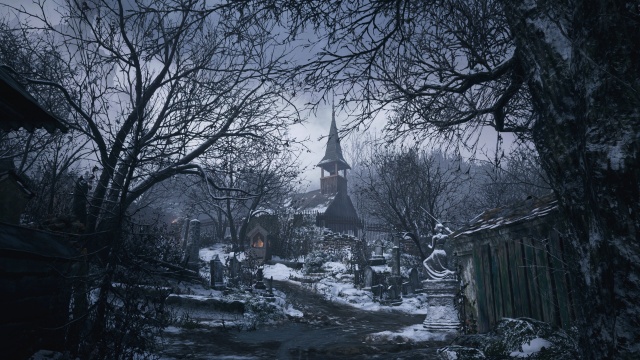 If you played RE7, you’ll be able to jump right into RE Village – it has the exact same style of gameplay. Once again, the gameplay is presented in first person. The surroundings are very reminiscent of RE4. The entire game has several references to RE4 as well. Unlike every other RE game, Village has a bit of an open world feel to it. The heart of the game takes place in the village then you venture outside the village to reach other areas where you’ll eventually meet up with a boss, but you always return to the Village. The game is a mix of linear and open world and it really works well. The village sections in RE4 and RE5 are often considered the most atmospheric portions of those titles. The setup for RE Village helps to maintain the atmosphere a lot better than other RE titles since you never do truly leave the village behind.

That’s not to say that other areas are not well-done though. You’ll enter a castle, swampland, residence, and other areas that all stand up well in a horror sense. The backgrounds in the game look fantastic and so do the character models – it’s a pretty big upgrade in detail from RE7 no matter what system you play it on. The motion capture for the character models is by far the best it’s ever been in an RE game. It’s truly amazing to watch some of the cutscenes with the life-like motion capture in some scenes. The first scene that introduces Lady Dimitrescu and her daughters has some amazing motion capture. I’ve also got to give props for the overall optimization of this game. I played this on Xbox One X and it moved at a very smooth framerate the majority of the time with only the slightest little hiccup in rare instances. 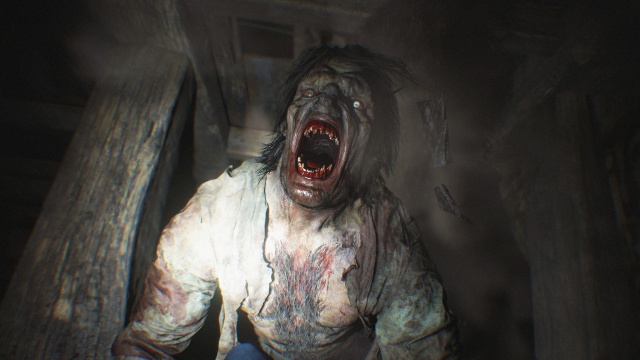 Enemy designs in Village have been upgraded a great deal since RE7. There is much more variety in Village. The standard enemy is the Lycan enemy – sort of like a more aggressive Ganado. Lycans carry weapons and they also bite with their teeth. There are many references to other RE enemies in the game. There is a big wolf enemy that resembles the Executioner from RE5 and some others that are similar to RE4 enemies. One really good thing about all the familiar enemies is that some of them might have similar attacks that resemble past RE enemies, but none of them are simple cut and paste reskins. Every enemy is unique in their own way.

The developers also did a great job on the bosses in the game. The first major boss is quite epic and the rest of the fights are quite good. As you progress in the game, you’ll be presented with some gameplay variety here and there – it’s not just all run and shoot action. One area has tons of puzzles to solve in order to progress and there are many other gameplay changes for upcoming areas as well (I won’t spoil them for you). 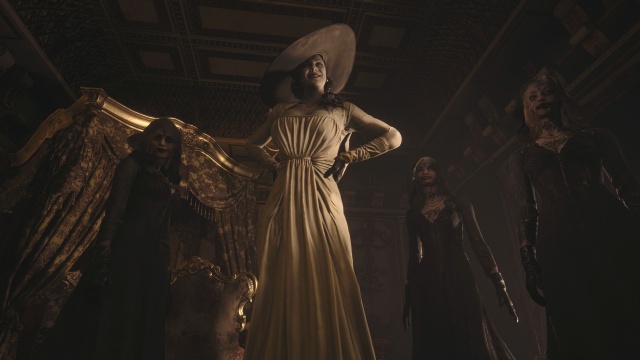 RE Village has its own merchant that you can seek out in order to upgrade your weaponry and purchase new weapons. Enemies often drop “Lei”, which is the main currency of RE Village. Sell treasures for extra Lei and you can purchase and upgrade more often. Just like in RE4, Village turns into a treasure hunt to seek out hidden treasures in order to gain more money. In traditional RE4 fashion, even woodland creatures such as crows carry cash on them! There are many hidden treasures to find and they are all labeled on your map after a certain point of the game, but you must figure out how to unlock them. Animals can be killed for their meat so that you can cook up special recipes with the merchant’s help in order to create meals that will boost your stats.

The overall story is good – it’s quite suspenseful. The story is honestly one of the best RE stories since Code Veronica for me. The majority of the characters are done well. The character design for the newer characters is fantastic! The four lords of the game (Lady Dimitrescu, Donna, Moreau, Heisenberg) are quite memorable and returning characters such as Mia and Chris are just as good. The only flaw in the characters is the main character, Ethan. Ethan is once again the faceless protagonist that is boring when it comes to dialogue. In RE7 Ethan’s faceless presence and lack of dialogue was more understandable since he was a brand-new character put in a difficult situation. In RE Village, Ethan has undergone training and now has a family. He is more adjusted to danger yet he still acts just about the same was as he did in RE7 for the most part. His one-liners fall flat and I often feel he would be better as a silent protagonist. Because of stuff like this, Ethan’s character seems to be even weaker in RE Village.

Overall, the enemy AI puts up a good challenge no matter which of the game’s four difficulties you choose. There are three standard difficulties (Easy, Normal, Hardcore) and one unlockable hardest difficulty – same setup RE7 had. In RE7 the Molded enemies would be tied to only one room and would dissolve (despawn) if they went past their original spawning room. You could exploit this slightly, but not near as much as you can with the enemy AI in Village. In RE Village, enemies must stay in certain areas - they will walk back to that area if they start to leave it. I often found exploits where I could lure enemies out of a room (or area) and then attack them as they turned around and walked back to their spawning area. You can literally follow behind enemies and shoot them and they will not even react when headed back to their spawning area. This makes a total joke out of some of the game’s hardest enemies sadly. Thankfully, not all enemies are like this, but a good bit of the bigger enemies follow this pattern much later in the game. 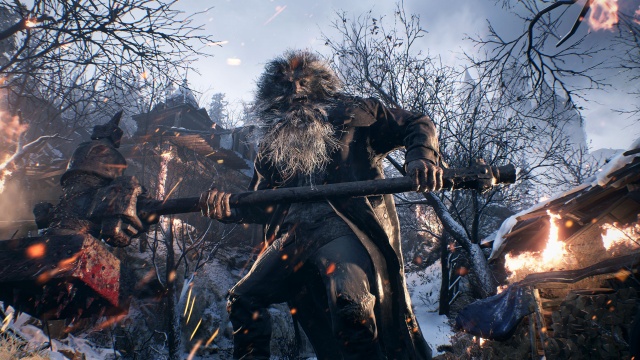 The campaign clocks in at around a 15-16 hours long. Once the campaign is completed, you unlock several bonuses along with a new mode. The Mercenaries mini game once again returns to RE! The Mercenaries mode for RE Village is most similar to RE4 Mercenaries. Each area is divided into a few stages (around 3-4) and you get to purchase and upgrade weapons at the merchant in between stages. Hit time bonuses for more extra time, defeat enemies to gain additional time and keep a combo based on enemy kills to score enough points for a good rank and you’ll unlock more stages and items. New to the Mercenaries are skills that can be unlocked by hitting blue orbs in stages. You’ll get to choose between three skills and all skills carry over in between stages in an area. This Mercenaries does take a few steps back though – there are no combo bonus pickups, there is no leaderboard, and there is only one character. This Mercenaries really should have some form of leaderboard since there is a score at the end of each stage and the competition would help to extend the life of the mode. If you ever competed for scores in RE5 or RE6 Mercs, then you’ll know what I mean.

Overall, RE Village is a fantastic RE game with some minor flaws here and there. It takes just about everything from RE7 and makes it better. RE Village loses much of the horror in RE7, but it makes up for it with everything else. I really feel it’s impossible to not like this game more than RE7 and this is coming from a person that greatly enjoyed the horror aspect of RE7. I was a complete naysayer once I saw that RE Village had more of an action approach and was proven wrong by the end of the game. Resident Evil Village is really good and is a definite pickup if you’re an RE fan.

The Good:
+ A good bit of gameplay variety, much like RE4
+ Bigger, better and longer than RE7
+ Motion capture is absolutely fantastic
+ Mercenaries mini game is back

The Bad:
- Enemy AI can be bad when moving in between areas
- The main character is still dull

Final Rating: 90% - Resident Evil Village continues Capcom’s shift in the right direction for the RE series.