Friday the 13th: Killer Puzzle is a sliding-block puzzle game developed by Blue Wizard Digital. The original release of the game was on Steam, iOS, Android, and Switch, but the game was recently released for Xbox One as well. If you’re familiar with Slayaway Camp, Killer Puzzle uses the same basic formula, which is an extremely good formula! Killer Puzzle is quite addicting and has a lot of horror fan charm to it that many Friday the 13th fans will definitely enjoy.

In Killer Puzzle you play as Jason Voorhees and get to kill camp counselors and other victims that happen to be in the area. You have to kill all victims in an area to clear a stage. The game is set up just like a sliding puzzle. Press in a direction to make Jason slide in that direction until he hits a wall or other obstacle. Each area is a unique puzzle designed to challenge you in your movement. Whenever you move close to a victim and face them, Jason will kill them in a gory death. The final victim will be announced as the “final girl/dude” and you’ll get a cinematic cutscene with a QTE for the final kill. 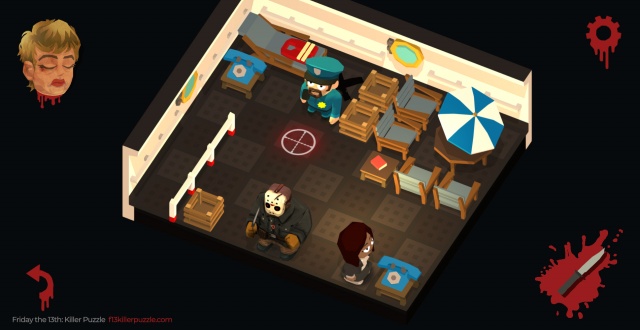 Sometimes you have to use the victims themselves as an obstacle for Jason to slide into in order to get to another part of the area. The game constantly adds in new obstacles and threats to challenge you. For instance, there are campfires that victims and yourself can die from, water, holes along with many other obstacles to avoid. There are also actual enemies that can fight back (police) and you can’t harm animals or you’ll get an “animal cruelty” message and then the game ends. Some stages also give you limited moves. Just like in Slayaway Camp, you can rewind a move or go back to the start of the stage to plan your moves once again. This game gets really hard with its puzzles later on and you REALLY have to take advantage of the rewind feature! In later stages, moves must be planned very carefully and basically every feature is used – such as scaring a victim over to an area to make an obstacle for Jason to slide into to get to another victim.

The game has many unlockable weapons that Jason can wield. His kills differ depending on the weapon that he has equipped. He has many kills with each weapon as well! There are also many unlockable skins for Jason. As you pass each stage, you’ll level up and unlock more unlockables. The game has a very simple look to it, but it all matches its style. The sound effects and voices are fantastic. The game has a lot of charm to it that will please many Jason fans. If you’ve played Slayaway Camp, Killer Puzzle feels extremely similar to that game, but with updated graphics and much more gore. The game does have a PG mode for those that don’t care about all the gore. Besides the main story, there is also a Daily Kill and a Survival mode. The Daily Kill gives you a new puzzle stage every day and the Survival mode challenges you to get as many kills as you can. I highly recommend this game to horror fans and puzzle fans. With its value price, it’s definitely a steal you won’t regret!

The Good:
+ Very addicting
+ Many things to unlock
+ Livens up the Slayaway Camp formula even more

The Bad:
- It’s extremely similar to Slayaway Camp, so it’s not original

Final Rating: 90% - Fans of Slayaway Camp should slide right into Friday the 13th Killer Puzzle easily without any restarts.