Scott Pilgrim vs. The World: The Game - Complete Edition Review

Scott Pilgrim vs The World The Game - Complete Edition is a 2D side-scrolling beat’em up developed by Ubisoft Montreal and published by Ubisoft. The game is based on the graphic novels published by Oni Press. The game originally released alongside the movie back in 2010 and was delisted from online stores in 2014, but has now returned on all newer consoles with all available DLC included to commemorate its tenth anniversary.

The plot revolves around Scott Pilgrim, a Canadian slacker and bass guitar musician from Ontario, Canada. He falls in love with Ramona Flowers (an American delivery girl) and she requires him to defeat her seven exes in order to date her. This girl’s exes are not your normal exes though – these guys are evil super villains basically. The full game is about Scott Pilgrim hunting down all of these evil exes while he fights through their cronies.

From the start, you’ll get to choose from a total of six character: four main characters - Scott Pilgrim, Ramona Flowers, Kim Pine, Stephen Stills – and two DLC characters - Knives Chau and Wallace Wells. There is also an unlockable character (NegaScott). After choosing your character, you’ll be taken to a Super Mario World type of map to choose your stage. The game plays very similar to River City Ransom (RCR) overall. You have short range melee (light and heavy attacks) and can pick up melee weapons. Just like in RCR, you can pick up bodies of enemies and hit other enemies with them or toss the bodies at them. Each enemy will drop coins once beaten. The coins can be used at shops to replenish heart points (health) or gut points (super attack meter). Some items will raise your stats. 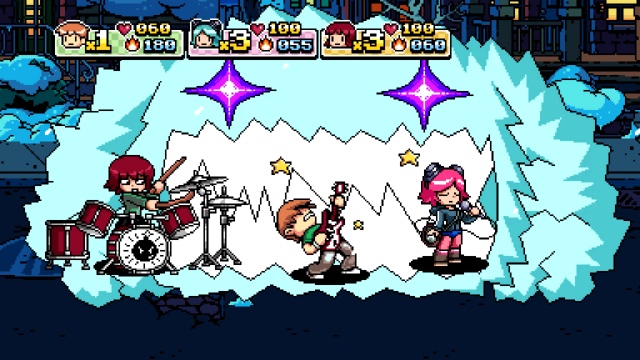 Gut points allow you to use your super attack and call in an assist. Once gut points are exhausted, your character will start to use heart points in place of gut points to perform super moves and assist. The actual town areas in the game take place in enemy stages, and you are allowed to run all the way back to some shops in order to replenish heart points and gut points. While battling enemies, you’ll be gaining experience that will allow your character to gain levels and increase their attributes. Your character starts to move faster and take more damage from enemies as you level up. You’ll also gain access to more moves as you level up. Many of the extra moves honestly feel like moves that you should have started out with from the beginning. Each character has their own levels to gain and the game keeps track of how far each character has gone in the story mode – basically, every character is their own save file.

Even though the game has a RCR setup to it, the overall melee and stage design reminds me a lot of The Simpson’s arcade game. There is so much wackiness and overall life to each stage. Pedestrians sometimes stand outside buildings and dodge your attacks when you get close. There are also many breakable objects and other random objects to pick up to use as a melee weapons (trash bags, garbage cans, baseball bats, etc). The overall stage design to the game varies a great deal from stage to stage. The first stage takes you through a huge snowstorm while later stages have you plowing through buildings. The overall game is a good throwback to the 8-bit and 16-bit era. It has so many references to older retro games all over the place and tons of eye candy to view. You’ll work your way through each stage while fighting baddies and eventually arrive at the boss (an evil ex). The developers did a great job with the boss fights – each Ex is very unique and has their own set of attacks and sometimes even change up the overall gameplay.

The game has a block button and, unlike most beat’em ups with a block button, this one is incredibly useful. You REALLY have to learn your enemy matchups in this game since enemies can get the drop on your character so very easily if you’re unprepared. Some enemies will suddenly dash toward you and attack, some enemies look around for objects to toss at you while they stay at a distance, others will try to jump kick you from mid-range. There is a bunch of enemy and attack variety in this game. When the game starts throwing a bunch of different varieties of enemies your way, the difficulty starts to increase quite a bit. 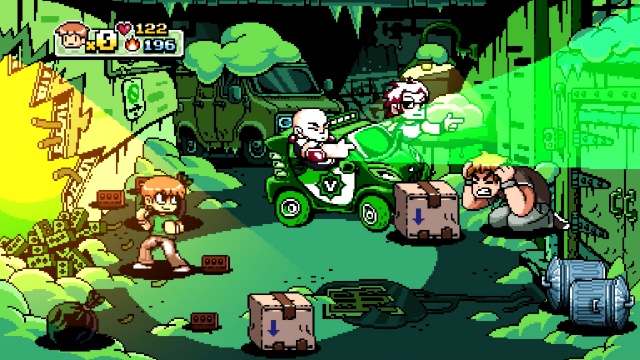 Speaking of difficulty, this game is hard. You can’t expect to put it on the lowest difficulty and breeze through it without frustration in one sitting. If you simply try to run up to enemies and spam them with attacks, you will get your ass handed to you very quickly during the first stage. The game requires you to learn each enemy type and how to deal with them. For me, the difficulty is both frustrating and plausible. When you’re low level at the start of the game, you will die a bunch until you gain both in-game experience and player experience. The game constantly brought me back to try again, but the difficulty seems overwhelming at first, which might scare off new players.

Not all of the frustration comes from the difficulty however. The game has a problem with hit detection at times. I would sometimes be right next to an enemy and couldn’t damage the enemy from the attack not connecting. This happens with both physical attacks and melee weapon attacks. Enemies like to get inside of your character model to where you often can’t hit them as well. The controls for the game also feel sluggish – mainly for movement. Your character starts out moving very slow from the start (until you upgrade) and you’ll have to rely on the dash command a lot. When playing with the thumbstick, the dash seems to come out with a simple forward flick on the thumbstick and sometimes that same forward flick will make you walk normally. When playing with the d-pad, the forward dash seems to come out fine with a simple double tap in the desired direction but playing this game with the d-pad feels clunky. It feels like some of the moves in the game don’t always come out when I want them to.

Scott Pilgrim can be played single player or co-op with up to four players total (local or online). This game shines greatly during co-op play not only for having friends to play with you, but there are a few attacks and features that are only available when teaming with others. For instance, all players can taunt at the same time to perform a super attack that is exclusive to co-op play. Honestly, the game is a lot more fun when playing with a partner. If you play the game solo, it’s still fun, but the difficulty will get to you more since the enemies will crowd you. 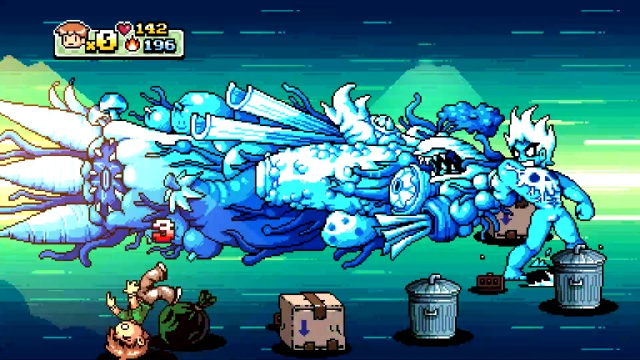 going for it that beat’em up action fans like to see. Just watching someone play the game makes it look incredibly fun, but once you play it yourself and notice the sluggish controls and random bad hit detection (among other problems), it dampens the experience. The game still holds up quite well as a ten-year-old beat’em up action game however. If you’re hungry for a new beat’em up and have already played Streets of Rage 4 and Castle Crashers then Scott Pilgrim is worth a shot since it is definitely a unique game despite its problems.

The Bad:
- The controls are sluggish
- The hit detection is off for attacks at times
- The game is hard – it can get very frustrating on any difficulty

Final Rating: 75% - Scott Pilgrim vs The World: The Game - Complete Edition is a stylish and unique beat’em up that is back to celebrate its tenth anniversary!