Battletoads 2020 is developed by a long list of developers: Rare, Dlala Studios, Ultimate Play the Game, Virgin Interactive, Mindscape, Arc System Works. Wow, what a mouthful. I know what you’re thinking. At long last Battletoads returns after so many years! Xbox and Rare have finally listened to the fans! Then you watch the first video and think to yourself “Ugh, wait, what happened to the style?” Well, the style is something that I actually got sort of adjusted to, but there are so many other problems with this game that keep it from being good.

The overall style of the game goes through a very noteworthy change from the start. The animation looks like something you’d see on Cartoon Network. The game also has the constant comedy to match. The overall voice acting matches the tone and style that the game is going for. The toads still turn their arms and feet into other objects while attacking enemies. The game doesn’t seem to care about bringing in many past objects for nostalgia fanatics however. It’s like a total reimagining of Battletoads, which some might not care for. I’m sort of indifferent to the changes myself. The comedy in the game is funny at times, but it does go overboard and focuses more on comedy than any type of plot. The toads themselves definitely have a lot more personality that set them apart even more than in previous games. 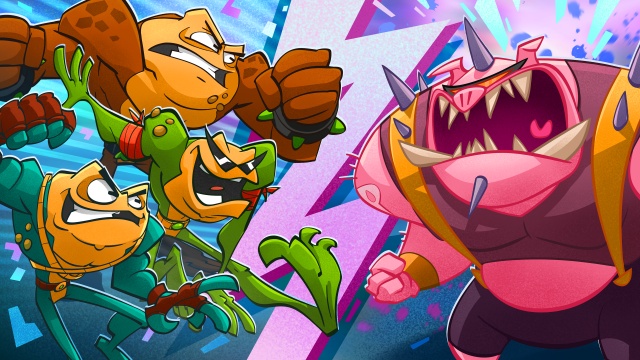 Battletoads is known for being a primary beat’em up game and the first few games ventured into a lot of action variety as well. Battletoads 2020 seems to start out as being more of a beat’em up then changes to more variety gameplay later on. The actual beat’em up stages have more complicated controls than your usual beat’em up. You have a normal attack, a pop-up attack, and a guard breaker. The normal attack button can lead to combos then you can tap the guard breaker during the combo to perform a special combo ender. The animations for the enders are quite nice – such as Rash playing a Battletoads arcade cabinet that hits enemies. Each of the toads have air attacks as well. Holding down the LT button will allow you to use the toads’ tongues to latch onto enemies and bring them to you, grab flies for healing and spit chewing gum to hold down enemies. The RT button serves as a run button (out of fights) and a dodge button (during fights).

Each toad has his own unique attacks. Pimple is the slowest toad with more power while the other two hit for lesser damage but are faster. Overall movement feels very slow and sluggish no matter which toad is chosen, however. The controls make the combat feel overly complicated once the game starts making you use all of your available options. You know how enemies like to surround you in other beat’em up games? With Battletoads 2020, they constantly surround you and there isn’t much you can do about it. Battles are constantly spent dashing in and out of enemy groups while trying to group them for attacks. Enemies that shoot projectiles often run away and force you to chase them down while you deal with crowds of other enemies and have to dodge projectiles that home in on you. Some enemies will guard against your attacks and you’ll have to hit them with a guard breaker. The problem with the guard breaker is that it must be charged leaving you open to attacks from behind and possible projectile attacks. The animation for the guard breaker is extremely slow as well. The amount of attack and dodge options you have can deal with all of this, but it all gets overly complicated very easily. 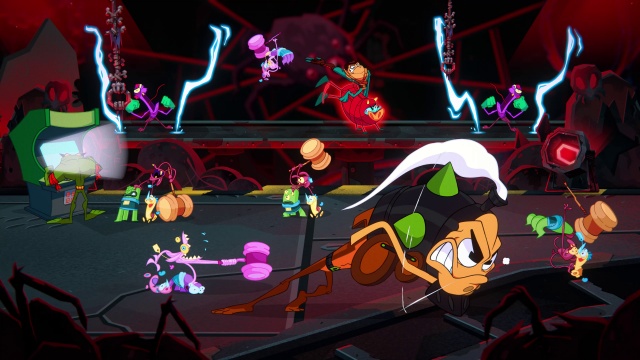 Boss fights are actually the best parts of combat – this is where the game truly shines. Boss fights often have their own unique weaknesses which livens up the combat. Other than bosses, the beat’em up gameplay in Battletoards 2020 gets dull very fast. Not to mention that the enemy designs are extremely boring. All enemies are some type of brightly colored alien jelly things. The attack variety of enemies that you’ll fight changes up frequently as you go into newer stages.

Eventually, the game will start to add variety stages such as the well-known speed bike stage. The speed bike stage is done in full 3D this time with a behind view of the toads. You still have to jump and maneuver through tons of obstacles just like in classic games. One problem with this mini game is that objects will block part of the screen as you zoom by them – why can’t they be transparent as you get closer!? There are also a few QTE mini games which are actually kind of fun. Later on, the game will introduce a shooter stage that is a literal bullet hell. There is also a type of rollercoaster ride and others. Eventually, there is a strange and very out-of-place puzzle stage where you play as one of the alien things. Why is that puzzle area even in the game!? The majority of the variety stages feel like a type of flash game – especially the lazy puzzle mini games in the beat’em up stages. 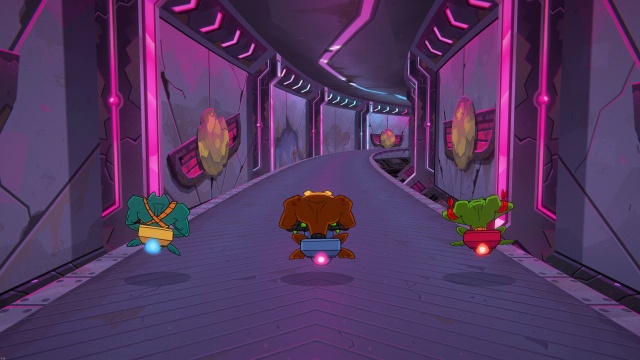 The variety stages are where the true challenge of the game comes in. The speed bike stage ramps-up the difficulty as usual, but the other stages definitely do as well. They all give you that “how much more stress can I take” type of difficulty feel, which is good, considering that’s what Battletoads is well known for. We all remember the first game’s ridiculous challenges. The rollercoaster stage goes really out there with having you hold a button then press and hold the jump button to hop over gaps and avoid obstacles at times. Ever try holding Y and then pressing and holding the A button on your Xbox controller? It’s very awkward, but I did sort of get used to it!

Each stage ranks you on how well you did. There are also plenty of collectibles – some of them are associated with overall time completion of a stage. There is a lot of stuff to do for completionists and of course the usual achievement hunting. The game clocks in at around 4-5 hours long total. It has a total of 4 acts with many stages in each act. The game can be played locally with up to 3 others players. I didn’t get a chance to try it with another player, but it definitely looks more fun with a partner. Sadly, there is no online co-op option. The game can rarely be fun, but overall I found it quite dull for the most part. The game is a mixture of dull and frustration. I really wanted to like this game, but at the end of the day, I just don’t. 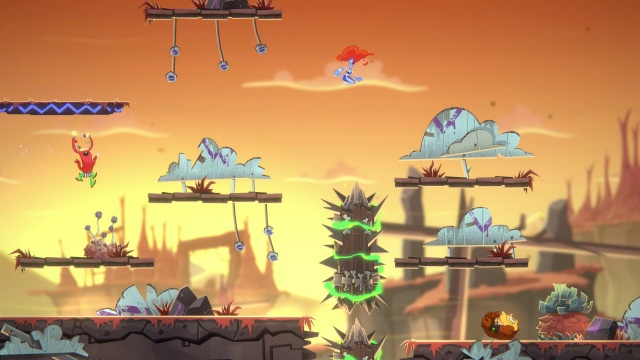 The Good:
+ The difficulty is definitely there
+ Music, sound effects and voice acting are good
+ The toads have more personality this time

The Bad:
- The variety is not split up enough
- The out-of-place puzzle stage later on
- Overall game’s gameplay is dull
- No online co-op