The UFC series is definitely a franchise that I keep up with as new games are developed since the combat is so unique. Just like other simulator games, UFC is hard to learn, but it’s very rewarding once you start to figure it out. EA Sports UFC 4 is the latest in the mixed martial arts franchise developed by EA Canada and published by EA Sports. Along with the usual roster updates, the game gives us an improved Career mode, upgraded visuals, gameplay improvements, and much more!

Right from the get-go, the improvements are noticeable with the fighter select screen. Fighters are now shown in small pictures along a grid just like most major fighting games. No longer do we have to go through a long list of names to see the available fighters one at a time! The character select screen is divided into three segments this time with the first segment being a list of the highest ranked fighter. This is really nice since most players are going to want to choose the fighters with the best stats anyway. You can use the shoulder buttons to switch between the different weight classes, which will change up the on-screen roster. The second segment of the fighter select screen has all the fighters listed in alphabetical order by last name. The third segment is for all of your created fighters. The game is definitely more fluid. UFC 3 looked really game, but UFC 4 has even more fluid animations for each fighter. Instead of always fighting in the usual octagon ring of the UFC, you will also fight in other arenas, such as a backyard area with surrounding chain fences. 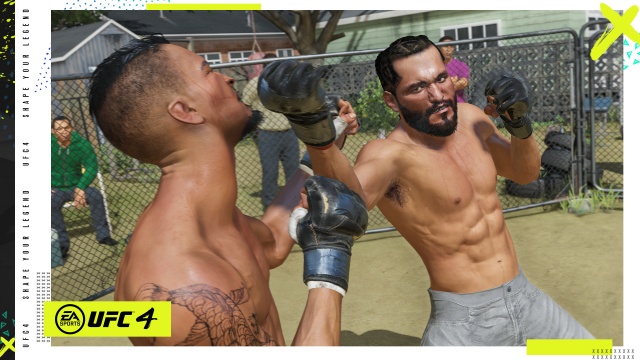 UFC 4 introduces a new grapple system for the attacker once a takedown is successfully connected it’s called “Assisted”. With the new system, you use the left thumbstick to choose between Ground and Pound, Submission, or Getup. The new grapple controls are basically like a VERY simplified (and less in-depth) version of the original Legacy Control grapple system. There is no need to hold down shoulder buttons to modify your transitions between the three basic actions listed above and also you use the left thumbstick instead of the right thumbstick. You can still choose the original legacy controls in the settings menu and use those during grapples. The original legacy controls are far superior if you’re willing to learn them since the new grapple system doesn’t go through the majority of the commands that you can do with the legacy controls. There is also a “Hybrid” system that uses both the left and right thumbstick. I honestly couldn’t get adjusted to either of the new systems.

There are also some other new moves here and there. You can now sway your fighter while guarding to dodge attacks without dropping your guard stance. Ground and Pound during a takedown seems to have lost its effectiveness from the way it was in previous games. If you’ve played other UFCs, you’ll most likely remember how lethal ground and pound could be but in UFC 4 it seems to take less damage per punch. The way of performing a grapple and clinch and the overall controls associated with them has been changed. You now have to hold a modifier then either tap a button for a clinch grab or hold the button for a takedown. Transitions from clinch to ground are all done through modifiers and buttons as well. This cuts out some of the struggling with the right analog – you now only do this during ground transitions. The overall fighting has improved and is more fun, but (naturally) it takes some getting used to when you’re still adjusted to UFC 3’s controls.

At the start of Career mode, you create your own character or choose an established fighter to represent you. You can also choose from a lineup of created characters that are already created for you to speed-up the process of starting Career then edit them later. Just like in the past games, you can’t edit the established fighters. Career mode has cutscenes and required tutorial stages this time. The game basically takes you through most of the basic controls of the games before it turns you loose into the main menu where you start to fight your way through opponents for your placement in the UFC. The forced tutorials really do help out for learning the game since they go over just about all the controls. Coach Davis helps you through tutorials with hints and tips and appears in all cutscenes. Your own created fighters appear in cutscenes and is actually voiced as well even though your character is very shallow. Your character’s biggest phrase is usually “yeah”. Couldn’t we at least have a “put me in coach” or something else? Coach Davis himself is great, but he doesn’t appear that much after the tutorials. It would have been nice if EA could have made some type of slightly engaging story for the Career mode. The cutscenes are overall good quality, but they are way too few and far between once you make it out of the beginning tutorial levels. 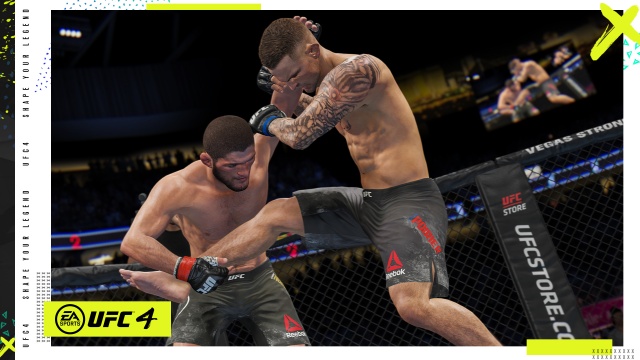 Once you finally arrive at the Career mode home menu, you’ll be greeted with the same basic options that you got in UFC 3. You’ll receive a fight offer, which you can confirm or deny, then you’ll have to choose the number of weeks to prepare for the upcoming fight. For training, instead of simply simulating training exercises, like in UFC 3, the game makes you spar with a training partner or hit a punching bag to train. While training, you’ll raise your fitness level and gain evolution points. During training (with an actual partner), you’ll level up certain attributes depending on the type of training partner that you have. Training is actually much more helpful this time since it is always “hands on” learning instead of simulation, but it can get just as repetitive as simulation when it is constant. You can train with all the four main types of opponents – Boxer, Kickboxer, Wrestler, and BJJ. It’s possible to receive injury while in training and it’s possible for you to injure your opponent. Injuring your opponent will make that particular category unavailable for the rest of the weeks of training and injuring yourself can be solved by healing yourself at a cost of money or time. You can build relationships with other fighters and learn new moves from them. There are tons of new moves that can be learned and customized to certain inputs using your customize menu. With Evolution points, you can level up your attributes and purchase perks for bonus attributes.

Building your fanbase is around the same as it was in UFC 3. Most of the time, you just choose what you want to do then get social media posts back as to how it went. There is an option to stream your training where you actually get to play your fighter and spar with a training partner. You can build your fans during the stream by performing flashy moves. Outside of Career mode, UFC 4 only has your standard CPU fighters where you get basically nothing in return. It still has the basic 1v1 and knockout mode. Knockout mode has been turned into your average fighting game now – it’s actually pretty cool and much better than it was presented in previous UFC games. There is a Stand & Bang mode where you cannot use grappling, ground work, or submissions. UFC 3’s Ultimate Team mode is gone and there was nothing added in its place. There are challenges associated with each mode (including daily challenges) that unlock XP and coins once they are complete – there are quite a few challenges to go through.

Online is about the same as it was in UFC 3. In the main ranked mode, you still challenge players of your weight class and work your way up to a championship belt through online wins then you have to defend it. There is some slight communication in online modes using buttons and the thumbstick when the icons appear where you can congratulate your opponent or taunt the opponent. The communication option appears before and after fights. Besides the usual ranked matches, there is also a mode called “Blitz Battles” where you fight your way through online opponents to reach a championship and the rules are constantly changing along the way. Blitz battles are only 1 match. For instance, for the first fight, you might be limited to only boxing attacks from a Welterweight division roster. Blitz Battles is a nice break from the usual matches. There is also still a Quick Fight option where you can choose from Any Rules, MMA, Stand & Bang, or Knockout Mode. All matches that I played online seemed to play out smoothly with the existing netcode. 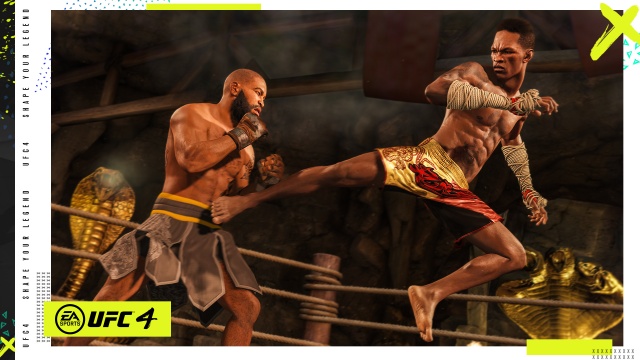 EA Sports UFC 4 reworks some of its gameplay and adds in more depth to some of its modes, but takes out some of the single player experience in the process. The new “Assisted” and “Hybrid” grappling controls might be good for beginners, but they are a total afterthought for more experienced players. If you plan on buying the game for single player modes, you’ll basically only have Career mode to hold you over. I feel Career Mode could have been made much more than what we got in this game – it is better than UFC 3’s Career mode, but it could have been even better with an actual story. If you’re buying the game for the full package, including online modes, you’ll get the most enjoyment out of the game since the online is quite good. The new Blitz Battle livens up an already great online in UFC.

The Good:
+ Fighter animations are more fluid than in UFC3
+ Career mode has a lot of content to unlock
+ Submission minigame is more immersive and engaging
+ Clinch and takedown grabs have been changed to modifier + button commands
+ Blitz Battle is a good change to the usual online mode offerings

Final Rating: 85% - EA Sports UFC 4's gameplay is overall better that its predecessor and the online now has a new mode.