Edna & Harvey: The Breakout - Anniversary Edition is a remake of a 2008 adventure game that itself was an homage to the classic adventure games that drove the rise of computer gaming in the 1980s. The 2008 version featured a low-res, pixelated look as a throwback to the early age of adventure gaming, but Anniversary Edition updates the game with high resolution graphics that give the game the look of an animated feature. The gameplay is still strictly old school, though, in all of its point-and-click, inventory-combining glory. While I never did play the original, I did review its sequel, 2013's Edna & Harvey: Harvey's New Eyes. I enjoyed that game well-enough that I was happy to give the original a try to see where it all began.

The game's protagonist is Edna, a young woman with a unique way of looking at things that makes her feel like the video game embodiment of Phoebe Buffay. As the game opens, Edna finds herself in a padded cell wearing a white smock, alone except for her stuffed toy rabbit, Harvey. She has no memory of why she's in an asylum or how she ended up in there in the first place. She knows she's not crazy, after all, and Harvey agrees. 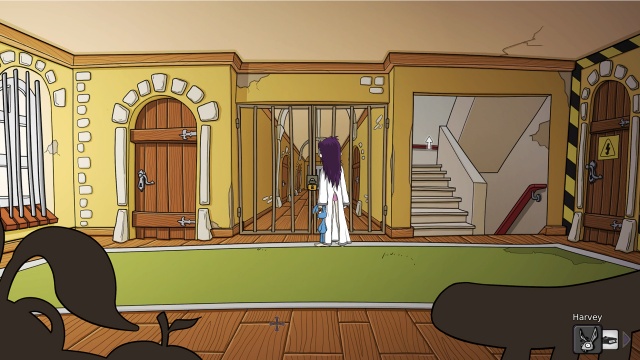 Your goal is simply to get out

Your first task is to find a way out of the cell, which the game feels is a self-evident goal. Those who've played these type of point-and-click adventure games before will catch-on to this right away, as well as how to interreact with objects and the inventory to accomplish this, but you're mostly left on your own if you're new to the genre. Edna & Harvey: The Breakout is not a game that will list your current objective or display arrows pointing where you should go next - you'll need to pay attention to the conversations that you have with characters, observe all of the items that you see in the rooms that you pass through, and constantly think of ways in which the items in your inventory may be of use in creative ways as you balance the multiple puzzles that are all facing you at once across the asylum. Personally, I enjoy this sort of challenge, but I know that it's not for everyone. That being said, I found that the game was a bit challenging in a good way. Some of the puzzles took a little time to work out, but I didn't feel any of them were obscure or obfuscated. I spent some time going in circles working a few of them out, but I never had to resort to a Google search to progress through the game.

Point-and-click games don't always transfer well to consoles because the left stick makes for a poor mouse. Thankfully Edna & Harvey: The Breakout doesn't attempt to mimic a mouse with a controller and has an interface that works well for a console game. As you move Edna around the screen nearby interactive items are easily highlighted with the controller, eliminating the need to drag a cursor slowly across the screen looking for them. Interactions are easily managed and inventory items are easily manipulated using the bumpers and triggers. It's a good thing that the interface is easy to use because the game has "look", "talk", "use", and "take" interactions for everything, and the sheer volume of possibilities here would make things very tedious with a clunky interface. Granted, you don't need to use the full range of possible interactions with everything, but if you're a completionist or just want to fully experience the game you'll want to put the time into trying all of the combinations. The developers certainly put a lot of time into adding a lot of detail into Edna's world. 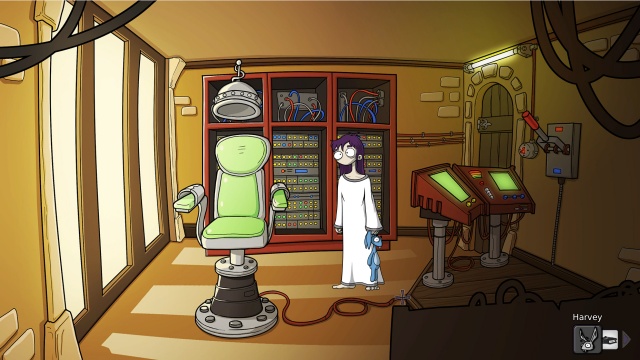 I wouldn't sit there if I were you

Edna & Harvey: The Breakout's story straddles the line between farce and black comedy. Edna's sure she's not crazy and she certainly has her wits about her, but she does talk to a stuffed rabbit that answers her back. Similarly, the other residents of the asylum certainly have their quirks, but don't necessarily come across as any more insane than some of the obstinate or obtuse people we're forced to interact with in our daily lives - although Edna clearly finds herself to be more rational than any of them. And it's questionable as to whether some of the staff should be patients instead. It's all delightfully quirky and eccentric, and while trying to get Edna to the outside world, part of the fun is trying to figure out just what is going on with this strange asylum, its resident patients, and the doctor who runs the whole thing.

Edna & Harvey: The Breakout - Anniversary Edition carries on the tradition of the old school adventure games that built the foundation of PC gaming. While it avoids some of the more frustrating aspects of that genre and competently translates a PC-centric gameplay model to console, it's still very much a classic point-and-click adventure game. If that sounds appealing to you, then you'll most likely enjoy this game.

Final Rating: 80% - A remake of an homage to classic adventure games with a delightfully quirky streak.