When it comes to WWE games, 2K has had some development troubles with their yearly 2K game so we got WWE 2K Battlegrounds to tide us over. 2K Battlegrounds is developed by Saber Interactive and published by 2K Sports. Instead of being more of a wrestling simulator, the game is an arcadey beat’em up that plays similar to WWE All Stars and even shares its super-deformed character style. While the game is an interesting break from the usual yearly WWE 2K title, it sure doesn’t hold up as well in the long run when it comes to content and overall replay value. There is fun to be had here, especially when first getting adjusted to the game, but the fun seems to fall apart too quickly and the overall gameplay gets repetitive when you’re just constantly doing the same thing to matter the mode.

The overall gameplay is kind of similar to the yearly 2K wrestling games, but it’s a lot simpler overall. You have your punch, kick, grab, and Irish Whip buttons and just about every other button that comes over from the usual 2K wrestling game. The LT button can be used to create super moves from your punch and kick buttons. Along with the usual direction + grab button to perform different grabs, the right analog allows you to perform special grabs. Power-ups can also be equipped to your superstar and activated with the directional pad. Power-ups are equipped before a match and you can equip a total of three. Superstars can also be equipped with a super special move that you can unleash when the super gauge is filled. 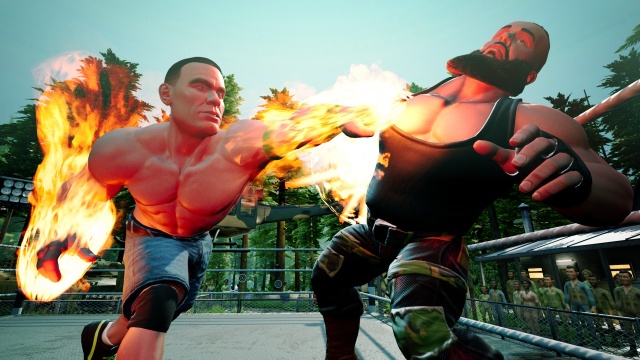 The gameplay is flashy and over the top. You can take things outside the ring as usual and pull up weapons from up under the apron. There are also hazards outside the ring such as a car that can fall on wrestlers. You can also toss wrestlers toward an alligator and get control of a robotic ram in order to damage your opponent. Ever wanted to hit your opponent with a motorcycle? Well, you can find that on the outside of the ring also. There is ever an explosive barrel that can be tossed into the ring to demolish the entire ring – this allows you to pick up the guard rails and beat your opponent with them.

For single player, the main modes of play are Campaign and Battleground Challenge. Campaign tells the main story of the game through a comic book-style – panels (for you to read) with no voice acting. The story focuses on Stone Cold Steve Austin, who is recruited to hunt down a team of superstars from around the world to complete in “Battlegrounds”. These superstars are unknown amateurs that Stone Cold happens to run into while scouting. Each chapter of the campaign deals with a newly found superstar. Fights are set up with popular superstars to test out the new blood.

The campaign takes you through a grid where you’ll advance through opponents and get to go off-track (at times) in order to gain unlockables. As the story advances, you’ll unlock new unknown superstars and get to follow their story. The standard 1v1 fights are the most common, but you’ll also engage in other modes such as Tag, Tornado Tag, Steel Cage, Royal Rumble, etc. The campaign is the mode where you unlock all your power-ups that can be equipped to each superstar and you’ll also unlock the new superstars in the mode. 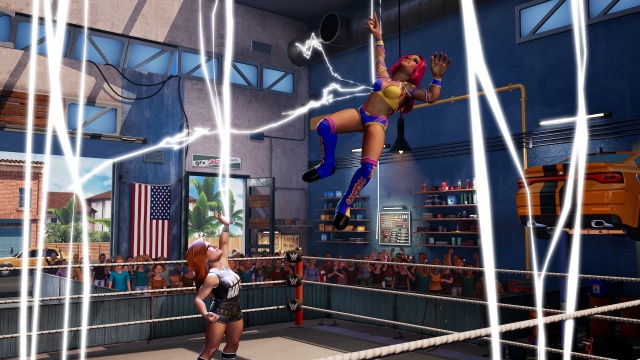 Battleground Challenge is played with a custom superstar. The mode has the same type of grid that is in campaign, only this one is much more expansive. You’ll mainly unlock the game’s in-game currency in this mode. Attributes for your created character can also be unlocked. Both modes feel around the same when it comes to overall gameplay. One mode just has a story and forces you to use certain wrestlers while going through a more linear path, while the other allows you to choose your own path more freely around a much bigger grid. The game also has your standard single player modes where you can choose whatever match type you want and fight the CPU or another player.

Besides the single player modes, the game has Tournaments, which allows you to go online and fight against players in matches that are only up for a few days. There is also King of the Battleground, which is your basic player matches against online players. As you beat opponents, you’ll be gaining in-game currency. You can engage in daily challenges that are constantly changing in order to gain more in-game currency as well.

The overall customization in the game is a letdown. The options for creating your fighter’s look is decent but the clothing is extremely limited. You only get a few choices for pants and shoes and is nothing else to unlock in these categories. When you go to full outfits, there is plethora of stuff to unlock and most of it costs some steep in-game currency prices (or gold coins) to unlock. 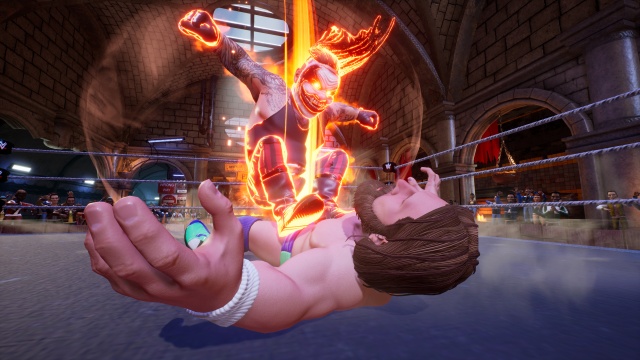 The game has tons of items to unlock and an overall good amount of stuff to do, but all of this really falls flat when the gameplay gets so repetitive. No matter what mode you play, there isn’t much gameplay variety outside of the standard gameplay mechanics. You don’t have the options that you get in the usual WWE 2K yearly release and it all wears thin fast and becomes a chore to play. The game is honestly fun at first, but it just doesn’t hold up well in the long run. I honestly prefer WWE 2K20 over Battlegrounds and that’s saying a lot with all the problems that game had.

The Good:
+ Much flashiness in the gameplay
+ Tons of things to do in single player modes

The Bad:
- Overall gameplay gets repetitive quickly
- The game has TONS of grinding to unlock stuff
- The overall customization options are lacking (especially clothing)

Final Rating: 55% - It’s nice to play a different style of WWE game from 2K, but this one quickly falls flat once the novelty fades.