Bullet hell shooters are all by their nature somewhat surreal, but few can match the level achieved by Freedom Finger. What at first appears to be a space shmup wrapped in a parody of 'Merican militarism soon transcends into something that could have been made by a Dadaist had videogames existed a hundred years ago, and it all begins with a hand.

Your role in this strange shooter is that of a faceless American warfighter who goes by the callsign Gamma Ray and pilots an advanced spaceship that resembles a giant metallic hand. The ship's weapon is a laser mounted in the middle finger which extends outward toward the enemy so that the last thing they see before being destroyed is you flipping them the bird. Your ship is far more than a one-finger salute to the enemies of democracy, though. You can retract the finger to turn your ship into a giant fist - a configuration that is useful for destroying some enemy ships, knocking objects into enemies, and even for punching the giant buttons that open gates, among other things. You can also extend the fingers in order to grab enemy ships, either to use the ships' weapons as if you were holding a gun or to throw the ships into other enemy ships and weapons. Not everything can be effectively punched and not everything can be grabbed - it's a part of the gameplay for you to experiment to see which enemies can be. Make a mistake and you lose some health and learn a lesson, but when you guess right you get a new way to attack the enemy. These extra attack modes add another layer of depth to the game that you don't find in most shmups. You're not only dodging bullets and keeping your finger pressed firmly down on the fire button, you're also evaluating the enemies attacking you to look for opportunities to use your alternate attack modes. 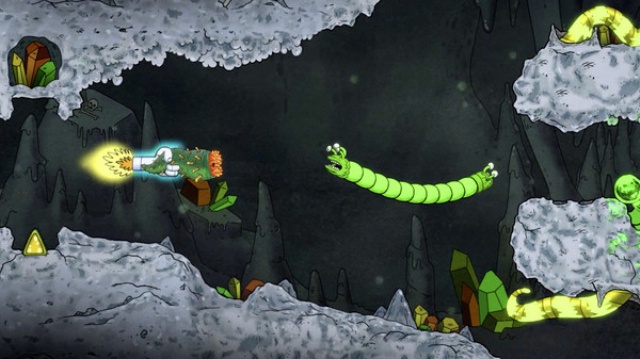 I used the term "ships" to describe your enemies, but that term only applies loosely. Sure, you start out fighting Chinese terrorists supported by their communist government and inadvertently drag the Russian military into things, but this is a game that will soon thereafter take you into battles against insects and amphibians, deadly toys, and museum art pieces that are armed with missiles even though they are missing their arms. It's all delightfully weird, and in a way a nice change of pace for anyone who's played their way through a space shmup that creates new levels by cycling through color palettes.

The game's levels add more than just an imaginative series of surreal settings; they also add significant challenge to the game. Freedom Finger is more than a game of bullet-dodging and it's more than using the right ship configuration for the right enemy. Freedom Finger also requires you to navigate your way past obstacles, down branching paths, and around deadly traps. In some levels, even the walls themselves move. You're not just contending with the bullets on the screen, you're dodging them in confined spaces and timing your moves past the kind of obstacles that are more common in a platformer. All the while the screen is relentless scrolling from the right, never giving you much time to linger in a relatively safe space before you must move past the next obstacle. 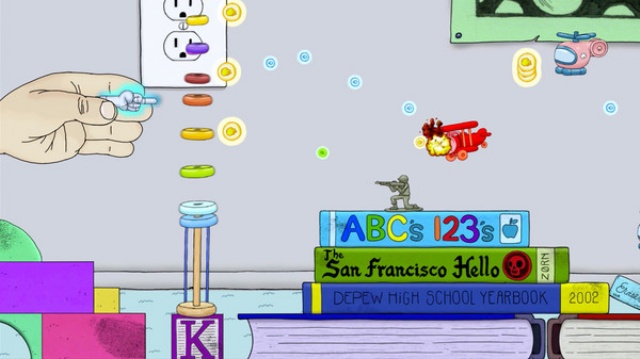 The game's unique look and challenge aren't the only things that set it apart from other bullet hell shooters. The game features an excellent rock soundtrack that's an integral part of the game, and it's actual rock music and not that emo or happy hipster stuff that tries to pass for rock these days. The soundtrack is more than just background noise, though, enemy waves and attacks are timed to the music. It's pretty cool to see a line of large enemies enter the screen right on the downbeat of a heavy rock guitar lick, and it definitely draws you into the game.

There's a nice feature to Freedom Finger that you don't often see in this type of game in that you can play any level of the game at any time. You should definitely play through the campaign to appreciate the game in all its weirdness, but it is nice to be able to be able to play a single level at any time without the need to beat it in the campaign to unlock it first. And when you play the arcade more, don't be surprised if you base your level selection on which ones have your favorite tracks.

If you're new to bullet hell shooters, I don't recommend that you start with Freedom Finger. It's a challenging game in a challenging genre. Anyone who enjoys a good shmup, though, would be remiss to miss the opportunity to play this game. You'll love that Freedom Finger isn't just another bullet hell clone and that it will really challenge your skills.