Remember Peggle, the Pachinko-inspired game from PopCap Games that was acquired by EA and has since disappeared into oblivion? In that game the object was to launch a pinball into a field of pegs that would be eliminated if hit by the ball, with the goal being to eliminate all of the pegs before you run out of balls. Wonderbelly Games has taken that concept and tweaked it into a rogue-lite dungeon crawler. It may at first glance seem like an odd combination, but Wonderbelly Games has managed to pull it off and create a game that's both enjoyable and whimsical.

In Roundguard, the Peggle pegs have been replaced with the trappings of an old-school RPG, clay pots, potions, traps, and, of course, monsters. The goal here isn't to clear the entire board, but to eliminate all of the monsters. To do so you won't be using a pinball, but one of three dungeon-exploring heroes who share the characteristic of being basically round-bodied. The characters fall into the warrior, rogue, and mage categories, with their class determining their starting health, mana, attack, and special skill. The health and attack affect what happens when a character hits an enemy; your attack rating will knock down their health and theirs will do the same to you. Mana is used to power your special skills such as the ability to smash through obstacles instead of bouncing off of them or to throw daggers as you bounce around the screen. 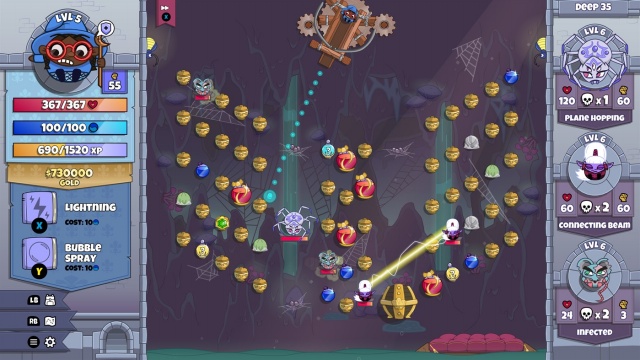 Each round begins with you launching your hero from a ballista at the top of the screen after you aim it at your desired target. The hero will then begin bouncing around the board, smashing pots, collecting potions, and attacking monsters. You shouldn't ignore the pots when lining up your shots, as hitting and breaking them collects gold that you will be awarded after clearing the level, and the leaderboards rank players on how much gold they collect during a run. Along the bottom of the board is a row of spikes, hit them and you'll lose some health and be returned to the launcher. However, if you're lucky you might hit something like a paddle or cushion moving back and forth over the spikes. The first will bounce you back up into the play area and the second will send you back to the launcher without losing any health.

Once you clear a level, the spikes will be replaced by one to three wells. A check of the dungeon map will show you where each one leads, so you can try to aim for one if you want to move down a specific path through the dungeon. All paths lead to a boss monster that awaits you in the final room.

As you make your way through the dungeon, you'll find weapons, armor, and relics that will increase your hero's stats as well as your chance of making it all the way to the boss fight. Should you fall to the bottom of a board with your health at zero, your run is over and you'll need to start again. Don't worry if you don't have the time to run an entire dungeon, the game saves the progress of your current run so that you can come back later without losing your progress. Should you die before the end of the dungeon, you'll spin for a random item to use on your next run, but you'll lose all of the upgrades that you gained along the way. Survive and you'll earn a gameplay-changing relic. 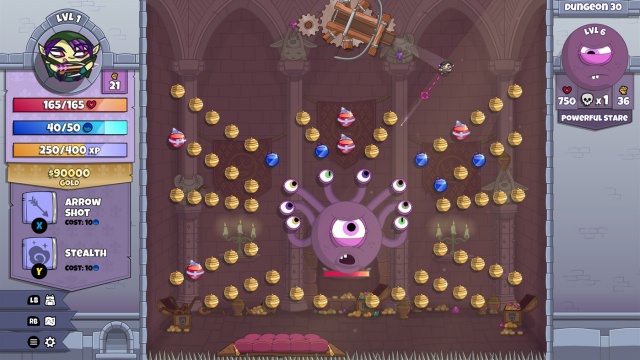 Roundguard has more to it than Peggle, the latter of which was pretty much all about the pegs, Roundguard offers a large variety of "pins", each of which can impact what happens when you hit it - hit a war drum and you'll be launched back up at twice the speed, for example. The enemies are varied not just in type, but in abilities as well, and some even roam the board instead of staying put like a good peg should. They, as well as you, can also be affected by status effects that change what happens when you strike a monster. Your shots will require more planning than simply aiming for the monsters because you may be in need of a potion, want to avoid a trap, or want to rack up as much gold as possible. Lastly, the game is not a passive "fire and forget" experience. Sure, you'll spend some time watching in hope and fascination as your hero goes bouncing around the board, but you'll actually have some control over what happens thanks to the character skills. As an added bonus, everything comes wrapped in fun cartoon graphics and a sense of humor. If you enjoy arcade puzzlers, you'll definitely want to take Roundguard for a spin.