Remothered: Broken Porcelain is a survival horror developed by Stormind Games and published by Modus Games. The game serves as both a prequel and sequel to Remothered: Tormented Fathers that released a few years back. The entire game is once again created, written, and directed by Chris Darril, who worked on the first game. If you’re a fan of the first game, this game’s story will really please you. Besides the story, the game falls flat when it comes to just about everything else, however.

You take on the role of Jennifer in Broken Porcelain. After being kicked out of an all-girls boarding school, Jennifer is sent to the Ashmann Inn to serve as a maid. She suffers an injury from a failed escape at the inn then she gets a scolding from Mr. Ashmann and gets sent back to do her daily chores with the other women that work at the school. The game picks up with you in control of Jennifer as strange things start to happen at the inn. 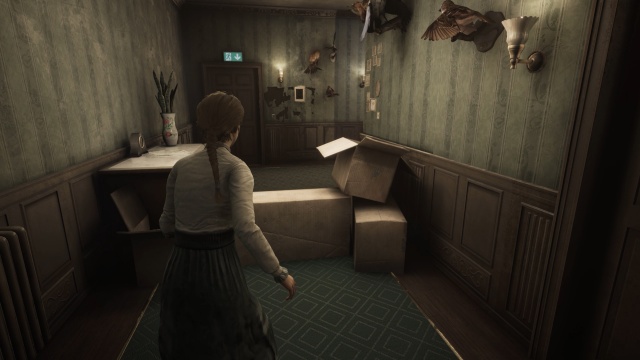 Broken Porcelain still has the same overall gameplay that the first game had. Hiding places are all around and you may hide to avoid your attackers. You can also use defense items to hurt your attacker in order to get away from them or toss/place a diversion item to distract your attacker. The first game did very well with this overall setup – the fact that you HAD to hide and distract your attacker made Tormented Fathers quite scary at times. Broken Porcelain doesn’t even require hiding. You can simply run by your attacker and complete segments faster by simply dashing by attackers to get to your main objectives. Basically, you can make a mockery out of enemies in this game. While hiding, you have to play a little minigame when your attacker suspects that you are in a hiding spot and goes to check it. Hiding is the more fun way to play the game, but it is definitely not required anymore.

Just like in the first game, diversion items are once again kind of hard to use. It’s very hard to aim your diversion items that you need to throw at enemies. Diversion items that need to be placed seem to work well however. This time you get the chance to mix your diversion items with other items to upgrade your item. For instance, you can mix some items to make the stun effect that they cause last longer than usual. You can also make items distract your enemies for longer with some mixes. Jennifer can also upgrade her abilities at certain areas. You’ll find moth keys throughout the environment that can be used to purchase upgrades.

As you progress further into the game, you unlock Jennifer’s “moth” ability that allows her to perform a type of “out of body experience” that sends you into a first-person view and allows you to explore far away areas. The moth ability can be used to manipulate objects and distract your attackers. The ability is a nice touch that helps to freshen up later areas, but it has its problems such as getting stuck on walls. Besides exploration and distraction, the ability also lets you see attackers through obstacles. 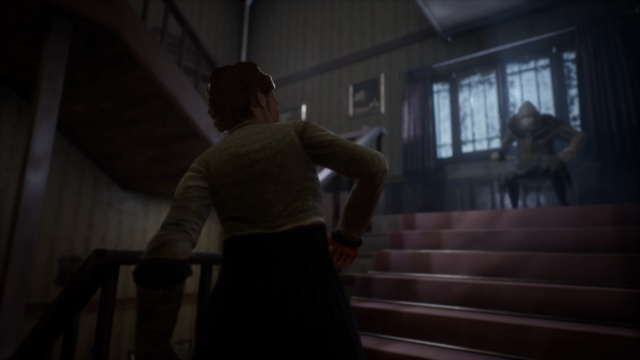 The enemies in the game are just about as well done as the first game. To go into too much detail would give out spoilers, but all of them have their own freakiness to them, such as a sick looking lady with moths flying around her head. There is also a really tall person wrapped in dark clothes and wears a mask that I won’t go into too much detail about. The overall graphics have greatly improved from the first game. The character models look WAY better than they did in Tormented Fathers and so do the environments. The sound is overall good for the most part – the voice acting is fitting for each character.

Now for the problems, and this game has some serious problems! The game can soft lock on players if you simply do something out of the natural order that was not intended. I would sometimes simply walk toward some doors, while a character leads me, and I would try to open them, and I’d get stuck and have to reset the game to fix the soft lock. I ran into several soft locks on my first time through. Sometimes audio would glitch as well. There was one point where a sound of a gunshot repeated over and over as characters spoke because the last section ended to abruptly, I suppose? Sound effects seem to be missing at times – such as an electric wire not making any type of crackling noise. I could literally go on and on. The game simply lacks polish and testing.

The gameplay to Broken Porcelain is overall dull. The atmosphere sort of falls flat on its face once you realize that you really don’t need to hide from your attackers. The game switches back and forth between characters very often – this is quite good since it helps to flesh out the story rather well. The story is really good for those that want a continuation of the story from the first game. The first game seems like only a stepping stone when compared to the events that transpire in Broken Porcelain. Broken Porcelain is quite a long game, especially with the numerous cutscenes to watch. If you’re a fan of the Tormented Father, you’ll get the most out of Remothered Broken Porcelain even with all of its annoying flaws. You have to be a really forgiving person to enjoy this game! It’s not “Amy” bad, but it certainly has its problems. If the developers can iron out many of the bugs in Broken Porcelain, the game will be decent, but the first game was much more satisfying (overall) either way.

The Good:
+ The story expands upon the original game greatly
+ The overall graphical look is way better than the first game

The Bad:
- The overall gameplay is not as fun as the first game
- Game bugs and soft crashes can happen at any time
- The game lacks the polish that the original game had

Final Rating: 55% - If you’re a diehard fan of Tormented Fathers, you’ll likely be the only type of gamer that will enjoy Broken Porcelain.