Plants vs. Zombies: Battle for Neighborville is the third game in the absurdist shooter series, although this iteration introduces a new subtitle and drops the numeral at the end. The basics will be familiar to anyone who's played either of the first two games. Two teams square off against each other in various multiplayer game modes, one made up of mutant anthropomorphic plants and the other of quite eccentric zombies. As you might imagine, the action is kind of crazy and a little bit weird, but also wholesome in a cartoonish sort of way that makes this shooter more accessible and friendly to younger gamers. This is a game without kills, only vanquishes.

When you enter the game you start in the Plants' hub zone. From here you can practice with the various Plant classes at a shooting range or in an adjacent amusement park populated with bots to fight. You can also obtain cosmetic customization items with tokens or currency earned in matches based on your score or by accomplishing daily and weekly goals. From the hub you can also jump into the multiplayer modes of your choice, or enter one of the game's single-player campaign zones. The Zombies have a similar hub zone and you can freely switch between the two. The game never requires that you commit to one side or the other, and encourages you to play both sides by alternating players between the Plant and Zombie sides between matches. 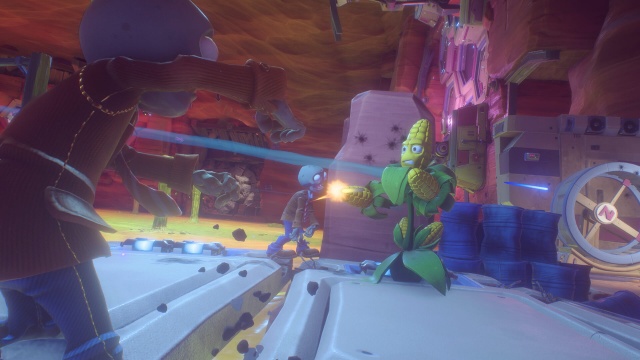 The game is class-based, with the available characters for play falling into one of three general categories, attack, defense, and support. Each class has their own unique weapon, as well as two special abilities and a super, and you can customize them a bit by selecting bonus perks although the character specializations from the previous game are gone. Each class plays differently, and you'll have to adapt your play to match. Ten of the characters make their return from the previous Plant vs. Zombies games, but three characters on each side are brand new creations. The Plants get a stealthy toadstool and a fire-breathing snapdragon, and the Zombies a roller disco fan with electrical attacks and an 80s action hero with a bow weapon. In addition, each side now has a character class that can link-up with other members of the same class. The Plants' have an acorn which can turn into a powerful oak tree which can link up together to make a more powerful version. The Zombies have a flying saucer jockey that can link up with other flying saucers to create a heavily armed space station.

The brightly-colored, cartoonish maps perfectly fit the game's style and humor, but they're also well-designed as shooter maps. There's a good variety of open and close quarters areas, plenty of pathways to take, and verticality that provides for numerous shooting positions and sightlines. There are a variety of game modes/variants available, from the traditional team deathmatch to an Overwatch-style team objective mode. The playlist also includes a regularly rotated limited time mode that might be a variant on one of the normal modes or a themed one tied to an in-game event. Overall there aren't as many maps or modes as you'll typically find in a shooter, but I didn't find that this made the game feel repetitive, especially since the limited-time special modes always provided for some novel play.

The single player zones make for a fun diversion from the multiplayer mode, giving you the chance to explore a bit of the whacky Plants vs. Zombies universe. I wouldn't recommend the game if you're looking to play it strictly as a single player experience as the stories are rather light and the zones can be completed relatively quickly when compared to a typical shooter's campaign mode, but you should definitely take the time to enjoy it for a change of pace from the multiplayer modes. Besides, the single player zones make for a good way to get practice with the game's classes while earning experience to level them up outside of multiplayer matches. 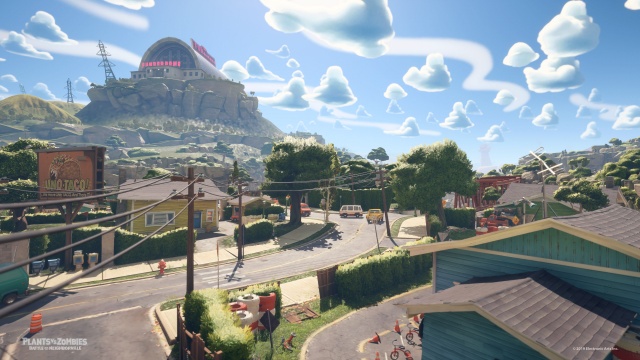 Progression in the game isn't about unlocking new weapons or other benefits, but rather about the pursuit of cosmetic items. Each character can be custom skinned/accessorized on numerous points on their bodies individually or with entire costumes. In addition, the player card shown to the players you vanquish can be customized as well, and there are numerous thought bubbles and emotes to unlock. Some of these customizations are only available for a limited time as part of in-game events, requiring you to grind your way through a prize map to grab them all, while others can be earned at random by spending the coins that you earn in matches at a giant vending machine in the hub zone. Since the customization items are essentially random, it can take a little time for you to earn enough pieces to fully deck-out your favorite character class. The items are purely cosmetic and have no effect on gameplay, but part of the fun of the game is seeing all of the character variations that players come up with.

Battle for Neighborville's goofy, cartoonish world makes it a shooter appropriate for younger gamers, but don't dismiss it as a kids' game. The gameplay will please most shooter fans, and it's good to have an option that doesn't take itself too seriously and in which the players are focused on having a fun time. It's a great change of pace for when you want a more laid-back but still fun shooter experience.

Final Rating: 80% - The battle for dominance between the undead and leafy green continues.