After last year's WWE 2K19 I couldn't wait to try out 2K20. 2K19 greatly improved on the WWE series with an interesting MyPlayer mode story and overall smoother gameplay. Even though the game had its problems, it had some overall good polish to it. And so arrives WWE 2K20 with our yearly roster update and enhancements. This year's release is developed solely by Visual Concepts without any help from Yukes. 2K20 has more of a focus on the female side of wrestling and the visuals have been updated. 2K20 is very much a mixed bag of good and bad.

The gameplay overall remains the same as it was in 2K19, but there are some changes to the controls. For instance, (on Xbox) Y is now the reversal button instead of RT. Finishers are performed by pressing both A + X instead of simply pressing the Y button. The overall visuals have improved slightly over 2K19. 2K20 has more detailed textures on wrestlers and ring environments (including crowds) and everything has an overall brighter appearance.

This year's MyPlayer has both a male and female character in it, so you have to create two characters from the start, which can get quite time-consuming depending on how picky you are. Thankfully, the game only allows limited choices from the start (or else I'd be on it for multiple hours). All created character items are mainly found in loot packs once again just like last year. You can pay for items that you really want with virtual currency, but it takes quite a bit for some items. Loot packs are purchased with coins that you get from completing towers. 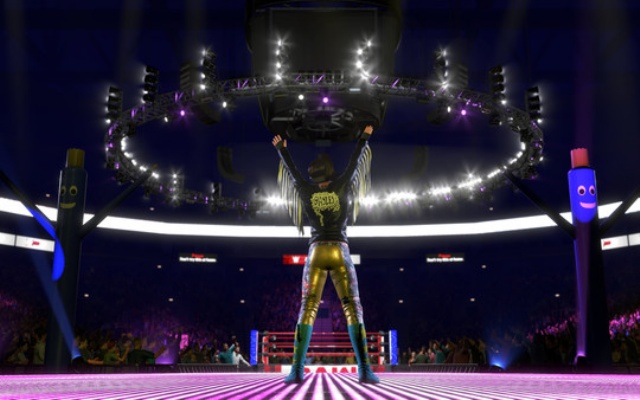 The male character is Tre (pronounced "Trey") and the female is Red. Both characters meet up at the WWE Hall of Fame and reminisce about their rise to fame in the past. The story has an overall good setup to keep from copying last year's story. You'll switch between both the male and female characters in your battles and both have a good amount of play time. Matches once again have specific objectives that you must perform to progress through the fight (usually to trigger a cutscene) and some fights are just simply your standard "pin the other wrestler". Just like last year, you'll meet at a hub in between fights and get to talk to certain characters and upgrade your wrestlers. Sometimes you get the option for extra fights or to choose something to slightly alter the upcoming cutscene.

This year's skill tree for MyPlayer is much bigger than last year's. All skills are displayed on a grid where you must unlock skills or attributes in order to see the unlockables that surround it - unlike last year, you can't see all the unlockables beforehand. The overall plot for MyPlayer is not as strong as last year. The male wrestler can get super annoying as well. Tre is made out to be an idiot, his dialogue is filled with boring jokes and he often just barely gets by with a fight or loses. From the beginning, he's made out to be a total joke that has to lean on his female friend to help get him through situations, but he does start to have some good moments in later chapters. Some of the established wrestlers have good parts in the MyPlayer story such as Samoa Joe's chapter. The overall voice acting is nearly just as good as last year's MyPlayer. 2K20's MyPlayer is decent, but the story is much slower paced than 2K19's MyPlayer story. 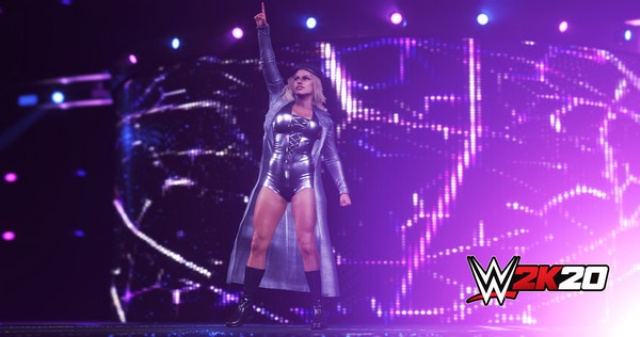 This year's Showcase deals with The Four Horsewomen. This year's showcase has a much more interesting topic than last year. This year you get to follow four female wrestlers - Becky Lynch, Charlotte Flair, Sasha Banks and Bayley - and relive their key matches. While the mode is quite fun, this mode really shows off how annoying the objective gameplay can be. You have a LONG objective list in some of its fights and if you mess up, you get to go through all those objectives again. It's quite annoying to engage in a 4-way event and get far into the objective list then have one of the AI wrestler's pin another inside the ring and win, causing you to lose the entire match because you were busy performing a specific objective outside the ring.

The game still has both 2K Central Towers and MyPlayer Towers. Towers allow you to go through a gauntlet of AI wrestlers (of varying difficulties) to unlock coins for buying MyPlayer loot packs. Some of the towers allow you to choose either a MyPlayer wrestler, main cast wrestler or there are some that give you a specific wrestler or tag team to use. Universe mode allows you to create your own wrestling programs and then engage in them or simulate the action. Online matches can be played with any wrestler of your choosing. These modes range from player lobbies to specific events that you can take part in. There is a whole tab dedicated to online matches in the MyPlayer mode as well. From what I played of these, the netcode seemed to work well so long as the connection remained stable.

The game still has the character creation option. You can edit your own characters and upload them for others to download. The level of detail for created character options is just as good as it was in 2K19. Looking over the variety of characters that other players create is just as fun as it was last year. Just like last year, you have to have certain unlockables already unlocked to use some characters. You can also create your wrestler's entrances and victory poses. The game allows players to customize an intro by splicing together certain parts of intros from other wrestlers. You have access to pyro for entrances and the ring as well. 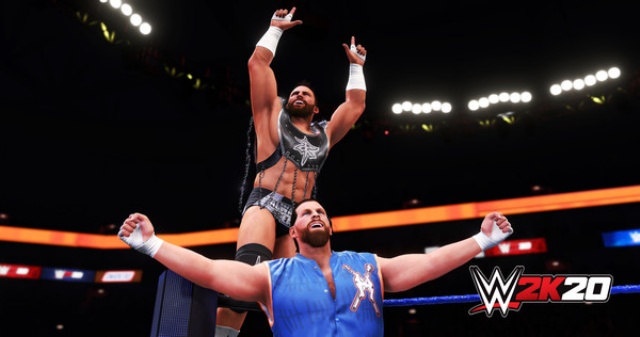 Now for the bad part, and 2K20 has some major bad in it. The game is full of random bugs that can happen at any time. Some of the worst bugs are found in Universe mode. I've had Universe mode freeze on me a few times. The game sometimes stutters after winning a match (as it goes to replays). I've had my opponent float in the air above my wrestler mid-match a few times. The pyro timing in the intro sequences is not timed correctly when placing it in a wrestler's entrance - while lining up the pyro along the slider, the pyro may go off earlier than it's supposed to. Some created character items are glitched - such as clothing clipping through other clothing or strange visual effects on some clothing. The overall hit detection and targeting is off. 2K19 was not perfect with all attacks connecting, but 2K20 is far more noticeable with that flaw. It's highly amusing to try for a dashing grab and have it totally whiff and then have the announcers speak about it as if it connected. Honestly, at times, it's hard to tell if something is a bug or normal. For instance, there are some cutscenes where the ring action is totally silent and you can only hear the crowd - is the crowd drowning out the ring sound or is this some sort of audio bug?

Even with all the bad bugs that can appear in the game, I had quite a bit of fun with WWE 2K20. The game does have a better overall look than 2K19 and it has new content, and that was enough to keep me playing. If the game could be cleaned up with patches, this game would still not be as good as 2K19, but it would be a solid wrestling game. The game is not totally broken but it certainly requires a lot of patchwork. The worst game bugs are found in Universe mode, so if that is going to be your main mode to play, then you might want to wait on this purchase. All other modes are very playable. Really the worst bugs (for me) are the freezing in Universe, the bad targeting and hit detection and the annoying pyro in created entrances.

The Bad:
- The game has many random bugs (literally a grab bag contest of "who knows what will happen")
- Bad hit detection and targeting at times
- Why no Kane '98?

Final Rating: 60% - Even with all the game bugs in WWE 2K20, there is still a decent wrestling game underneath.