Infliction is a first-person survival horror developed by Caustic Reality. The game was first released for PC back in 2018 and now it is being rereleased on consoles with an "Extended Cut" version. The game is heavily influenced by PT and uses the same style of lifelike surroundings and ghost enemies. You take on the role of a man that drives home to find some airplane tickets for his wife and then gets stuck in the house while trying to avoid the supernatural events that unfold within.

The majority of the gameplay is walking around the house and solving puzzles while avoiding enemies. Enemies are quite random in the game. You can hide from enemies by getting under beds and tables or by ducking behind obstacles in order to hide yourself. Sometimes enemies are simply unavoidable however and all enemies in the game will kill you instantly. There were many times where I saw an enemy and then was quickly killed before even being able to run away. Thankfully, you revive very close to your last position most of the time. The game can get a bit frustrating in some segments where you have to avoid enemies while trying to find a certain goal area to get to. 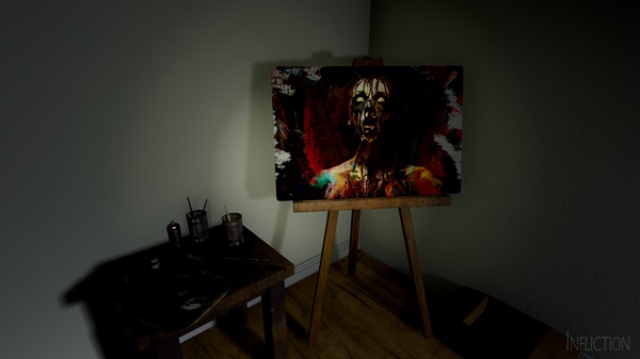 The puzzles are fairly easy and never get overly complicated. Not too far in the game, you get a camera that allows you to take pictures of certain areas in order to reveal hidden messages. There is one part where you have to take a picture of a wall in order to get symbols that will help you solve another puzzle. The camera can also be used as a weapon to stun the main ghost in the game as well.

It's quite noticeable the amount of detail in this game. DVD shelves have tons of DVD movies to look at, kitchens have varieties of foods to look at and there are so many interactions with other environmental objects to be had. You can nearly pick up ANYTHING in this game and fully examine it. It's quite amazing. The developers created their own DVD titles with full details such as summaries on the back of the box. The entire house that you get to explore has tons of realistic environmental details as well. The game's overall sound is quite nice too - you'll hear a bunch of disturbing sounds that suddenly spur up from nowhere. I have to give props to the game for not relying on jump scares that often - sure, there are some jump scares, but the game often tries to freak you out with buildup that doesn't often lead to a big scare (sort of like Silent Hill).

The story is pretty simple starting out - it feels rather generic from the beginning actually - but it does iron out very well toward the end of the game once the plot thickens and the twists start to come into play. From the beginning, the game looks to be a total paranormal type of game but it does delve into other types of horror toward the end. Fans of Hellraiser will be pleased with some areas. The game actually gives nods to horror movies and games at times. 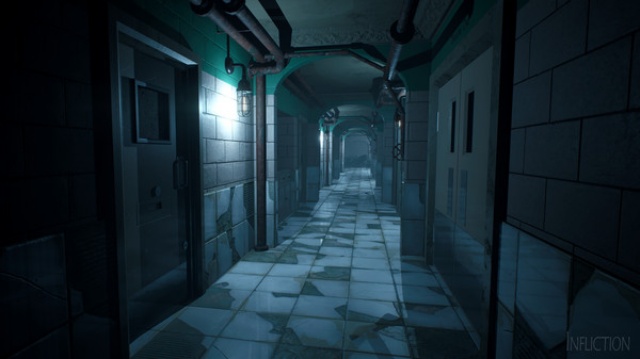 One of the biggest flaws that I found with this game is how much it uses PT as an influence. I hear people say that RE7 rips off PT for some of its realistic segments in a house, but Infliction flat out feels like it started out as PT but was then edited into another game and expanded upon. Let's go through all the similarities: 1) This game has a ghost lady that is constantly moving around areas and waiting to instant kill you. 2) You very often wake up in a room in a different location of the house and have to start your journey through the same house. 3) You constantly go through the same areas - instead of a hallway, its an entire house. Those are some of the main similarities that I found, but there are many others such as an overhead object swinging and making noise from the ceiling (remember the hanging fridge in PT?) and the many radio broadcasts. All these similarities really bugged me and dampened the overall experience. I just felt like the game was trying WAY too hard to mimic PT.

The overall gameplay to Infliction is also not too fun. It's not a total walking simulator, but the overall gameplay often gets boring. The majority of the time you're just searching for items, but even when it breaks out into puzzles or some sort of other distraction it quickly goes back to simply searching for items. The game often kills you in scripted sequences. You revive quite often. Even dying starts to feel repetitive after a while.

The game also has a good amount of extras. Many achievements require you to find hidden objects. There is also a variety of bonus content that is unlocked once you finish the game. There is a New Game+ mode and there is a really nice extra artwork mode. The extra artwork mode allows you to explore (in first person gameplay) a gallery of paintings and fills you in on extra details that helps to develop the plot and characters somewhat. In this era of incomplete games and games that have shallow extra content, games such as Infliction are highly noticeable with the extra mile they go with having a good bit of content to enjoy even after completing the game. The game also has multiple endings and a chapter select. 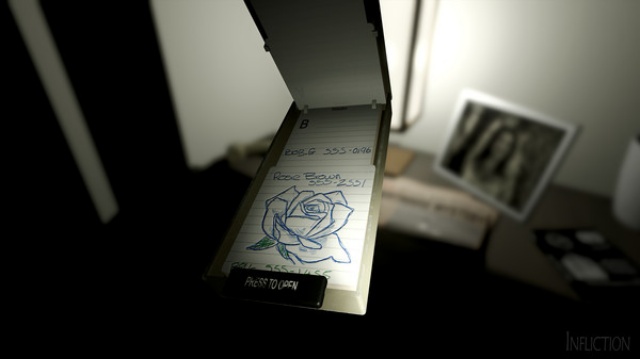 Even with the problems that I had with Infliction, I actually would recommend this game to horror fans for the story and horror atmosphere. Horror games are often not perfect when it comes to gameplay, and we horror fans often can deal with some of the most mediocre gameplay just to enjoy a good story and horror experience and Infliction is definitely that. By the end of the game, it's easy to tell that there was a lot of love put into this game for the overall concept and story alone. Even with all the flaws, it's still a game that I enjoy deep down, but I cannot deny all the annoyances that I had in trying to stay focused on completing it.

The Bad:
- Too heavy of a PT influence
- Gameplay is rather dull
- Instant kill enemies can get super annoying

Final Rating: 65% - Horror fans will find something to enjoy with Infliction for the story alone, but it's definitely not for everyone.