Dead or Alive 5 has lasted for quite a while with its many upgrades and extra DLC characters but we have been in great need of a true current generation DOA for several years now. Thankfully, Koei Tecmo just recently released Dead or Alive 6 (DOA6) and it's an overall good upgrade that the game series has needed. DOA6 has a main roster of 24 characters. Just like the last DOA, there is a free Core Fighters version of the game that acts as a trial and you can buy characters for your roster and the story mode separately or buy the full game to have access to all characters and content at once.

Joining the roster of familiar characters from the last DOA is Diego and Nico. Diego is a Latino street fighter with plenty of hard-hitting attacks. Nico looks like a Xenosaga character with her blue hair. Even though she isn't that original visually, she brings a fun fighting style with her and she uses electricity during some of her moves. Many of the returning fighters have some sort of tweaks to mix them up a bit. 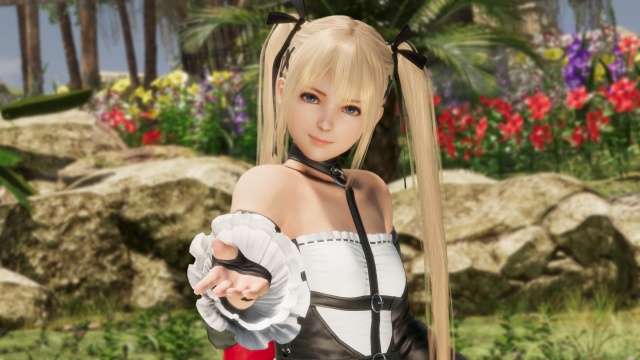 New to DOA6 is a Break Gauge that is displayed below a fighter's health bar. This gauge starts out at 50% from the start of a fight then gradually fills as you attack your opponent. A new "Special" button has been added that will cause a Fatal Stun whenever you hit your opponent with this attack. All fighters have a four hit special button combo that will fatal stun with each attack. If your Break Gauge is full at the end of a fatal stun combo, your fighter will perform a Break Blow at the cost of the full gauge. The Break Blow is sort of like a Power Blow from DOA5 (same sort of sequence) but it is not limited to once per round and your current health does not matter. The Break Blow can be activated at any time, once your break gauge is full, by pressing forward + Special also. The Fatal Stun combo ending in a Break Blow has tons of damage scaling, so performing it outside of that combination is the best. At the cost of 50% of the gauge, you can perform a Break Hold which is much like a normal DOA counter, but it counters high, mid and low attacks all with one command. The break hold is not very damaging, but it is a surefire counter to just about any attack. There is also a side step that can be done with the special button to where you can press the button and perform a side step attack.

Some fighters can gain Fatal Stuns with their own regular moves as well. A Fatal Stun is a stun that makes the opponent collapse shortly after being hit. Critical Stuns are still in the game as well and they are quick stuns that can lead into a major combo if you keep stunning your opponent. Some attacks cause a critical stun instantly and some require you to counter your enemy by hitting them as they attack in order to gain a critical stun. Certain stages once again add to your attacks by allowing you to juggle your opponent off the wall or into some sort of "danger zone" that DOA is well known for. DOA6 seems to focus more on stages where you can juggle your opponent off of walls more than any other DOA games. Stages have fewer transitions than prior games - such as knocking your opponent over a ledge or send them rolling down a hill. There is one stage where you can knock your opponent into a crowd and the crowd will toss the opponent back and allow for further attacks on the stunned opponent. 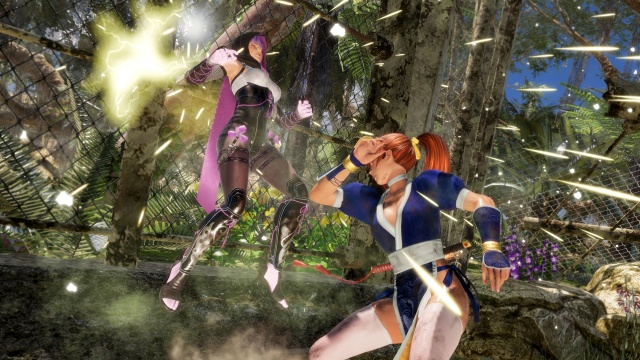 The overall fighting feels a lot like the last game, but character movements are smoother and fighters look noticeably more detailed. Each fighter will gain sweat on their body while fighting. All fighters have some sort of breakable objects on them that they will lose as they are hit by Break Blows, such as Kasumi losing the band that holds her hair back. All characters still keep an anime appearance but they have more detail than they did in DOA5.

As far as single player goes, the game has a Story mode that is much more interesting than the last game's story mode. The cutscenes are much more "to the point" (and shorter) and they are exciting. Story mode allows you to choose from branching character stories that ultimately form the entire story for the game. Every character has some sort of involvement in the story, whether it be fighting in the DOA tournament or engaging in events that happen behind the scenes. Allowing us to play as multiple characters when we want to instead of taking us down a predetermined path is a much better setup for the story mode and I hope to see this continued in the next game. This is one story mode that I'd actually replay. DOA6's story has story elements that are never truly explored and left in the dark, but it is still way more exciting than the last game.

Besides story mode, the other major single player mode is DOA Quest. DOA Quest allows players to choose from a total of 130 missions where you get to play as a specified character and must perform a list of three objectives to gain stars that will help to unlock outfits and coins for buying unlockables. Besides the main single player modes, there is also your standard Arcade, Time Attack and Survival. There is also a Versus for fighting a second player or the CPU. There is a mode for watching the CPU battle it out and watching online replays as well. There are tons of outfits, titles and other unlockables to unlock and purchase. As you progress through the game, you'll gain coins that can be used to buy unlockables. Unlike past games, instead of instantly unlocking outfits, you gain points toward unlocking outfits as you beat modes. Each outfit has a certain number of points that must be collected before it becomes available to buy. There are also tons of titles to unlock. Titles can be displayed on your profile during online play just like in other games. 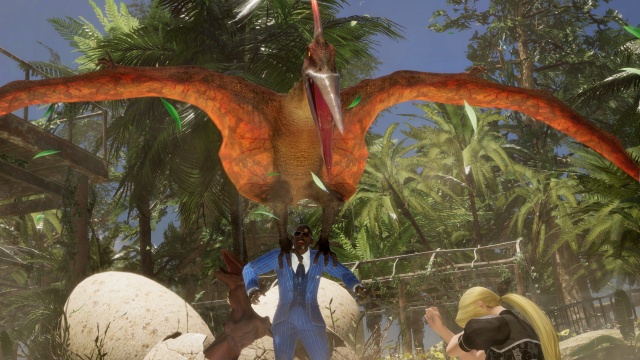 I really enjoyed the training mode for the last game because of its specific details about every move and DOA6's training mode is no exception. You can learn a lot of details regarding your characters moves and how to fight against other characters in the training mode. The game also has an in-depth tutorial mode that goes over every feature in the game. Besides training and tutorial, there are also Command Training and Combo Challenges for every character. All characters have their own small tutorial mode for going over some of their most useful attacks as well.

For Online, DOA6 only has Ranked matches. One super good part about the online is that you get to see your opponent's connection speed before a fight and can accept or decline the battle for up to 10 second before the battle starts. Hopefully more fighting games will have an option to see your opponent's connection beforehand in the future such as DOA6! Once you meet up with a player online, you can fight it out in matches where you have to win three rounds. You have the option of fighting a player again so long as the other player is willing to accept. You start out with a grade of F- and have to work your way up through the ranks by winning. I mainly searched out good connections and the overall netcode seemed to work very smoothly while fighting it out online. You can have the player search find matches for you while you're in training mode, but sadly you can't have it activated while in a single player mode. While the online ranked matches are done very well, where did the lobbies go? It would be nice to have some casual lobbies to meet in just like in DOA5.

Besides not having lobbies, the game has no option for tag battles anymore either. There is only solo play. The stages in DOA6 are not as memorable as they were in past games. You have some stages that have memorable moments, such as the ship with the octopus outside of it and then you have plenty of boring stages, such as the street where you can knock your opponent over a railing or take the fight back into a bar. The stage selection is not all the way bad, but its easily the worst of the series.

How much you will enjoy this game depends upon how much you like DOA. If you thought the game series was just "ok", you probably won't care for DOA6. Mainly only hardcore fans that want to take the time to learn the game and play online will enjoy DOA6 rather than casual fans that just want to play the game for fun. The game is lacking content, but it's still far from the content that was lacking in Street Fighter V when it originally released. In terms of single player content, you get all the standard single player options that all DOAs have in them along with an improved story mode and DOA Quest. It's really too bad that they didn't decide to include tag battle and online lobbies. No matter what, DOA was in severe need of an upgrade from DOA5 and this one makes the overall fighting better along with looking better, so it is a worthy sequel if you are a big fan of the DOA series.

The Bad:
- No casual matches or lobbies
- No tag battle option
- Overall stage selection is lacking

Final Rating: 80% - For the most part, only hardcore fans will enjoy Dead or Alive 6, but it's an overall worthy sequel to get your DOA fix satisfied.