State of Mind is a futuristic sci-fi adventure game developed and published by Daedalic Entertainment. The game presents us with two game worlds and multiple playable characters. The main character is Richard Nolan that players take control of from the start and spend a good majority of the game traversing the game world as him while exploring and solving puzzles to advance the story. The game is very similar in setup to a TellTale game, but relies a bit more on exploration and gets to the point of its narrative sequences quicker.

State of Mind's setting is 2048 in a futuristic Berlin where drones and humanoid robots are taking the place of humans in public areas. At its core, the game deals with the fate of humanity and if a digital world could be the answer to that fate. Following an explosion, players take control of Richard Nolan who wakes up in a hospital and finds that his wife and son are missing once he returns home. Richard Nolan works as a journalist that opposes the new machine movement and finds that he and his family are involved and at the center of it. 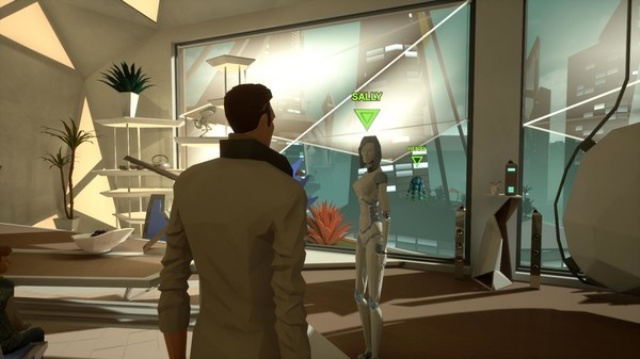 The story in State of Mind starts out very slow but, before long, it really turns into a fantastic sci-fi thriller. The game puts a lot of depth into the setup of the characters, but it is all more-appreciated when the true plot starts to unfold. As the game progresses, you'll take control of many different characters and get to explore multiple worlds in the past and present. There are points where you'll switch between characters at your leisure in order to progress the plot. Going into too much detail with the story and characters will spoil the story, so just know that the game's story is quite good with many interesting characters and a good bit of memorable cutscenes.

The majority of the gameplay consists of walking around and talking to different characters. Thankfully, the game has a fine mix of exploration and puzzle solving thrown into the mix so it never feels repetitive. The game also constantly changes playable characters and worlds that you'll explore. Returning to your home area will give you access to a board full of objectives that needs to be accomplished. I very seldom found myself wondering what to do next other than at times when I failed to talk to specific characters in order to activate certain events. I very seldom truly enjoy Telltale games and this game has a similar setup but it has far more variety that held me over to the end.

State of Mind has a very unique graphical style to it. The style has a mix of blocky textures with an overall cel-shaded appearance sort of like Killer 7. The style really works well for the overall look and character expressions during conversations. From the beginning of the game, I couldn't help but notice how great the voice acting was. Each character has a good voice actor that matches the character quite well and makes conversations very interesting. The overall sound is a mix of techno and upbeat themes that match the world quite well. 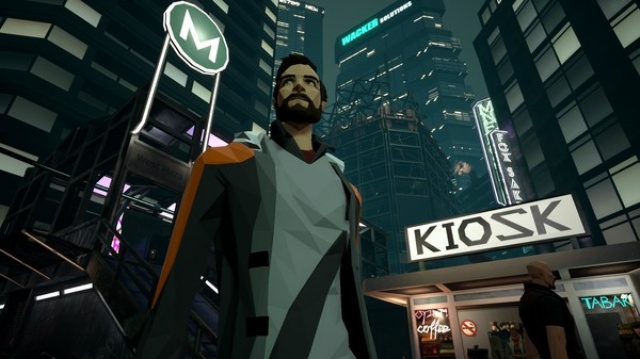 The only main problem I had with the game from the start is that the character control seems a bit sloppy when trying to turn the character. The character likes to stray to the side when trying to walk forward sort of like when switching camera angles in a game with more modern controls. State of Mind feels similar to Resident Evil 6 in overall character movement to where the characters seem to move to the side a bunch when turning. For the most part, the puzzles are very simplistic, but a good majority of them don't come across as memorable. The puzzles could have had more appeal and creativity to them. For instance, matching up tiles to form a virtual scene is interesting the first time, but it is used all too much throughout the game.

If you're a fan of science fiction stories, such as the Deus Ex games, you'll most likely find something to like in State of Mind. It's got some nice twists and surprises once it starts moving along at a good pace. The number of characters you eventually play as and the learning of some good information about each of their lives helps the story out a good bit. Also, the game's style by itself was enough to draw me into it from the get-go. I really hope to see more stories such as this from Daedalic Entertainment in the future.

The Bad:
- The character control feels a bit sloppy when walking forward
- Many of the puzzles could be more interesting
- The story has a slow beginning

Final Rating: 80% - State of Mind is a true gem for those that like futuristic sci-fi stories.