Man of Medan is the first of eight planned installments in The Dark Pictures Anthology. The game is an interactive survival horror developed by Supermassive Games. Supermassive Games is most well known for their work on Until Dawn, the same type of game as Man of Medan. Until Dawn stands as one of my favorite PS4 games, so this review will compare it to Man of Medan quite a bit. Along with the usual single player story, Man of Medan incorporates online and local co-op play for its story.

The story opens with four youngsters and their captain taking a boat ride out to a crashed WWII plane wreck somewhere in the South Pacific. After exploring the wreckage some bad things happen during the middle of a storm and the crew eventually finds themselves on board an abandoned ghost ship. Players take on the role of each character at certain points and must help guide the characters through the nightmares that await. Just like in Until Dawn, you can shape the attributes of each character and change some points of the story based on the way you play - choices that you make both in conversation and how you react to certain situations. Some events are locked out or newly revealed based on the way you shape the story. 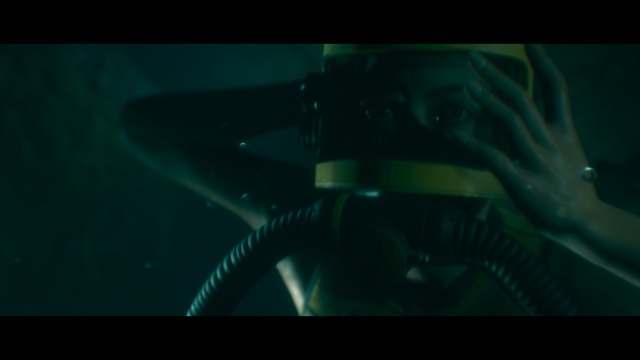 The story seems more fragmented than Until Dawn. You'll have to play through this game multiple times and read every file in order to figure out many of the game's details. Some details can be locked out depending on how you play - this really wasn't as noticeable in Until Dawn. With Man of Medan, I was left with many questions once the credits started to roll. On a second playthrough, I was noticing some of questions being answered from making different decisions and by seeing other scenarios. This is definitely a game that you'll want to replay multiple times and its short length (around 6 hours) makes it easier to replay compared to Until Dawn.

The overall gameplay is still full of QTEs and exploration. When you're not watching a cutscene or engaging in QTEs, you'll be free to explore an environment. The environments are full of interactables such as files and areas to examine. There are some interactables that will influence the story if examined or manipulated in a certain way. Man of Medan drops the "hold still" QTE that Until Dawn had in favor of controlling your character's heartbeat by tapping a button as waves move across the screen - sort of like Guitar Hero style gameplay. 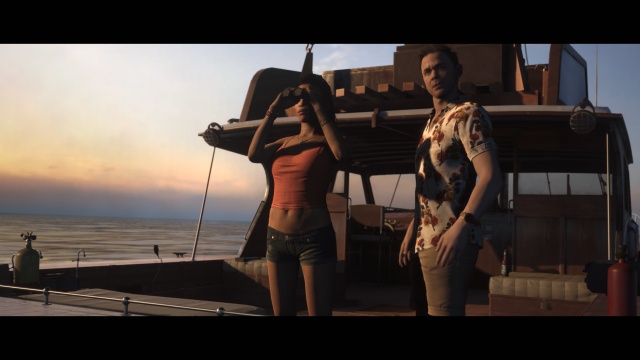 In terms of story, Man of Medan seems strong, but the game offers way too many hints for its twist to stay hidden for long. It's arguable that a player can figure out the twist very early on and make the majority of the game seem meaningless. Compared to Until Dawn, the overall story of Man of Medan isn't as solid. Also, once Until Dawn got into its good segments, it hardly ever let up. Man of Medan hits a few high points then settles back down way too often. The game also wraps up too quickly. The game's climax hit me before I even knew it and then the game was over and I was left asking "oh, so that was the finale?!"

One really cool part about Man of Medan's story is that it often has two scenarios going on at once. While playing the game with another player, you gain access to one scenario while the other player goes through another scenario. Both scenario's decisions will impact the characters involved, which opens the door to many different opportunities per game.

The game supports both online and local co-op play. Sadly, the game only lets you play online with people on your friends list or from a specific club (on Xbox). It's a mystery to me why you can't match up with randoms online especially since half the fun of playing online co-op is that you never know what choices your companion will make in their scenario.

The two scenarios become somewhat of a curse if you plan on playing single player and didn't preorder the game however. While playing through the game on the single player "Theatrical Cut", you only get to see specific scenarios. The game has a mode called "Curator's Cut" that unlocks after you beat the game and this mode is a preorder only exclusive at the moment. The Curator's Cut allows players to play back through the story and view the other scenario that weren't shown in the theatrical cut. Both scenarios offer their own bits of story and choices. It boggles the mind why the Curator's Cut is kept under lock as a preorder bonus and not simply available to all - it's nearly equal to making the second scenarios in Resident Evil 2 remake only available to people that preorder. 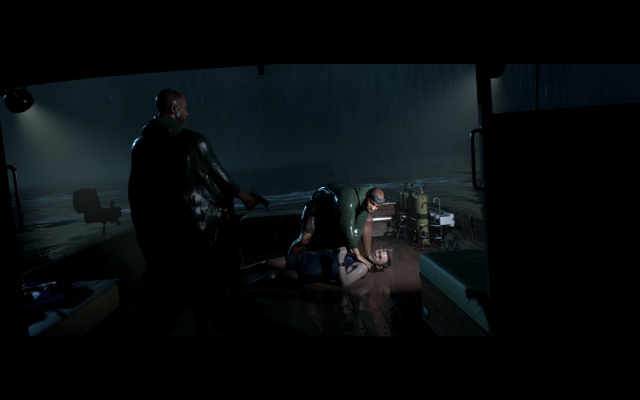 Man of Medan is also full of performance issues. I played the game on Xbox One X and had many skips in the framerate. The framerate skips can interfere with gameplay, most notably the QTE where you have to match up button taps with heart beats. Some of the bonus content also suffers - there is one video that has bad audio while it plays.

If you enjoyed Until Dawn, you're basically a shoe-in to like Man of Medan in some form. Even with all my problems with Man of Medan, I still greatly enjoy the game for what it is and look forward to the rest of the series. The game's technical problems keep me from giving the game a solid 8/10 but if those could be addressed, that would be my score. Overall, Man of Medan is a good pickup if you're in the mood for an engaging horror story. Supermassive Games definitely knows how to do horror and overall atmosphere so there is plenty to enjoy about the game if you're a horror fan.

The Good:
+ Very suspenseful and engaging horror game
+ Local and online co-op play and the game handles this very well
+ The game has a good bit of replay value

The Bad:
- Framerate skips during gameplay and other performance issues
- The overall story is weaker than Until Dawn and the plot twist is easy to figure out early
- The story doesn't have many high points
- Online co-op players does not allow players to play with random players - it only allows you to play with friends
- Why is the Curator's Cut not available to all players?

Final Rating: 75% - While not as solid as Until Dawn, Man of Medan shows that Supermassive Games is still comfortable with the horror genre.