Sea of Solitude may technically be a puzzle-platform game, but in reality, it is more of an interactive allegory about psychological isolation and loneliness. You play as Kay, a young woman who has become a monster who awakens to find the town in which she lives has been abandoned and flooded. The waters which fill the streets are inhabited by a large monster that taunts Kay and looks to swallow her whole. As Kay makes her way through the town in search of other people and to avoid the monster, she encounters other monsters and apparitions that are the embodiment of the people in her life closest to her. All of them also suffer from forms of loneliness and isolation even while surrounded by people or even loved ones. In trying to help them, Kay finds that she is helping herself as well. 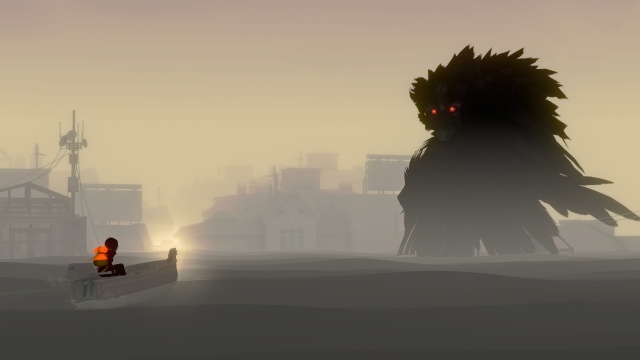 The game is divided into chapters, and each one takes you to a different area of the flooded city and deals with a different aspect of Kay's life or focuses on a different person in Kay's life. You navigate the city via a small rowboat with a lantern hanging from the bow, as light is one of the ways that you can keep demons at bay in the game. You can swim between the islands of buildings as well - and at times you'll have to - but if the monster in the water finds you it will come up from below to swallow you up. You'll encounter areas that are mired in a corruptive darkness, and in these areas everything is gray and black, the sky stormy, and the waters are turbulent, and if you stray from the light you risk being taken by some of the demons that inhabit the shadows. To clear these areas you need to find the source of the corruption and either pack it away into your backpack or direct a beam of light using your body so that it shines on the corruptive force. 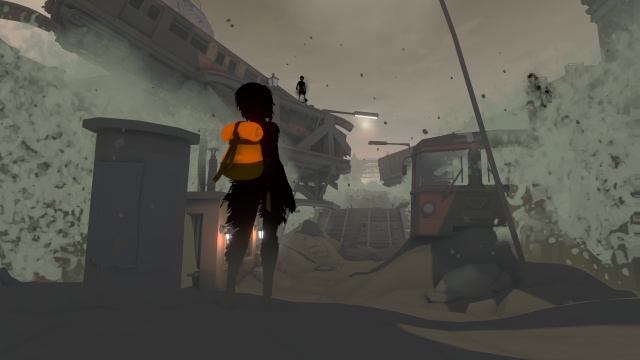 Areas that aren't corrupted are serene, with colorful buildings, a lazy summer sky, and calm waters. You can explore these areas, finding ways to reach the pinnacles of the building islands. Exploration is rewarded by two types of collectibles in the game. The first is bottles containing messages which are written by a mysterious person who seems to have walked this path before. The others are seagulls which must be shooed away, but this is a completely pointless exercise that will only be pursued by someone who wants to collect all of the game's achievements. 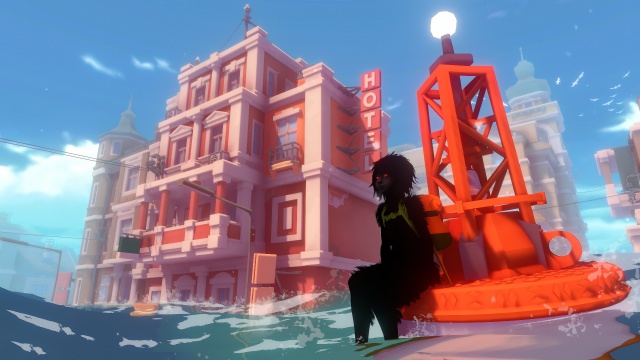 There is not a lot to the game from the perspective of gameplay elements. The game will introduce a new element in a chapter, you'll rely on that element heavily in that chapter, and then you may not see it again for the rest of the game afterwards. There's very little in the way of gameplay progression - the later levels do not progressively add challenge to the game and the moves, techniques, and gameplay elements that you gain during the game are not combined to give you new types of puzzles to solve or challenges to overcome. When viewed purely from a gameplay perspective the game's chapters can be quite repetitive and even at times tedious. There looks like there's more to explore in the game's world than there actually is, and even then the game wants to keep you on track by giving you a flare which always shows you where to go next. It feels like the game is aware that its primary purpose is to tell its story and so it doesn't want to distract you from pursuing the narrative.

Sea of Solitude certainly has a unique look and feel to it, but the novelty alone is not enough to carry the game. Your enjoyment of it will come down to how much you connect to Kay and her story because the gameplay alone will not be enough to compel you to play until the end. Even if you're just in it for the story, there are times when that story will also feel like a slog, especially when you face the monsters that represent Kay's endlessly bickering parents. The game is certainly an unusual experience, but it will probably leave you wishing that it was a more compelling one.

Final Rating: 74% - Sea of Solitude is a personal journey that takes you along for the ride.