Star Wars Jedi: Fallen Order takes place in the time between the end of the Clone Wars and the events in the Rogue One: A Star Wars Story. The Jedi Order has all but been eliminated, its few remaining members forced into hiding across the galaxy while the Empire's Dark Side Force-wielding Inquisitors try to hunt them down. You play as one of these Jedis, Cal Kestis, who didn't quite have time to complete his training as a Padawan before the infamous Order 66 that doomed the Jedi was issued. Working as a scrapper on the planet Bracca, Cal is killing time as much as hiding, unsure of himself and his place in the galaxy's new order. When an industrial accident forces Cal to use the Force to save a friend, his hiding place is revealed to the Inquisitors, who send the infamous Second Sister and Ninth Sister to Bracca to root him out and hunt him down. Cal is no match for the Second Sister, and is only saved through the efforts of former Jedi Master Cere Junda and her pilot, Greez Dritus. Cal joins their cause of tracking down a lost holocron containing a list of Force-sensitive children scattered across the galaxy, and the race begins to retrieve the holocron before the Inquisitors find it, or Cal, first.

The story is considered canon for those of you well-versed in the Star Wars universe. You'll note plenty of references to events, characters, and locations from Clone Wars and Star Wars Rebels, but even if you're only a casual fan of the films you'll still have some touchpoints, including the appearance in the game of Saw Gerrera , the character brought to life by Forest Whitaker in Rogue One.

Fallen Order is an action game with an emphasis on exploration, and it's impossible to play the game without having thoughts of the latest Tomb Raider series. The exploration is traversal-focused with some puzzle elements as well, and your Jedi powers give you the ability to perform feats such as wall runs or to use your Force powers such as Force Slow or Force Push to provide access to new pathways. Some of the puzzles can be a little tricky, but not so much so that they will be a roadblock to seasoned gamers. If the game detects that you may be stuck, it will offer to give you hints through your droid companion BD-1. While not dead giveaways, these hints should send most gamers in the right direction. 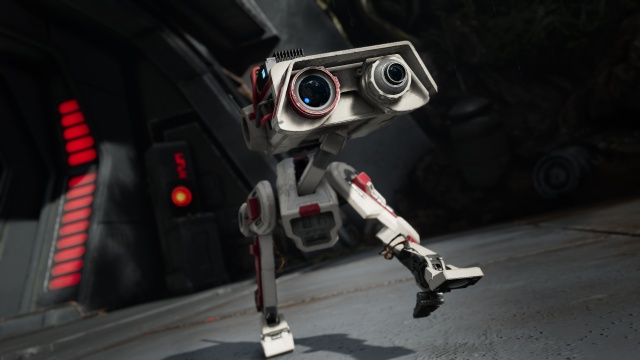 BD-1 fills its role as a Star Wars companion drone quite well, providing the occasional comic relief but primarily there to aid you with its skills when you need them. BD-1 can hack terminals and doorways, rifle through chests to find collectible items, and can even act as your pulley to turn cable wires into zip lines for you. BD-1 is also there to scan objects, fauna, and enemies for you, providing both background information and some tactical tips on how to best handle them. And when you're in a real pinch, it can be called upon to eject a health canister that you can use to stay in the fight a little longer. You'll probably find yourself getting attached to the droid that looks like a pair of binoculars stuck on top of a pair of miniature AT-ST legs, much in the same way that it hops onto Cal's back and attaches itself while Cal is traversing the game's levels.

Fallen Order captures the agility of a Jedi - as you're traversing the levels seguing from a wall run to a rope swing to a leap through a wall that you've just opened with a Force Push, you'll feel like the supernatural parkour master a Jedi is. Any mistakes made that send Cal falling to his death will be your own, as the controls are tight and responsive. The game is pretty forgiving of mistakes, sending you back to the nearest safe spot, even if that's the top of a column halfway through a traversal sequence. Some of the traversal elements feel more "videogamey" than they do Star Wars, such as air vents that serve as jump pads and long slides of ice or mud that will have to be navigated. As long as you don't think about them too much, though, they won't detract too much from the experience. 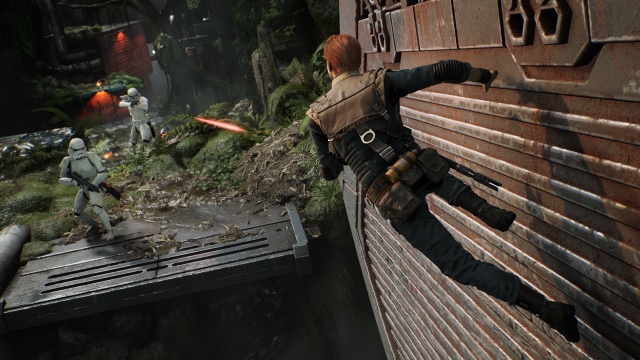 The game's combat system works as well as its traversal system, but you definitely have to work within this system as button-mashing won't get you very far. The timing of your blocks and parries is important as not only is it necessary to avoid taking damage, but it opens opportunities to land effective counterstrikes. You'll need to stay mobile, using your dodges and rolls to evade attacks, especially when you see an enemy turn red to indicate that the incoming attack is unblockable. Force powers can be used in battle in addition to your lightsaber, but they're used more to take advantage of opportunities than as your primary offensive capability. You may use a Force Push to knock an enemy over a ledge or a Force Slow to allow you to move around an opponent's block to attack their flank, but you can't run around using Force Push on your enemies until you sweep them all off of a platform because the energy used to power these attacks is pretty limited in battle and has a recharge rate that's long enough to keep you from spamming Force attacks. 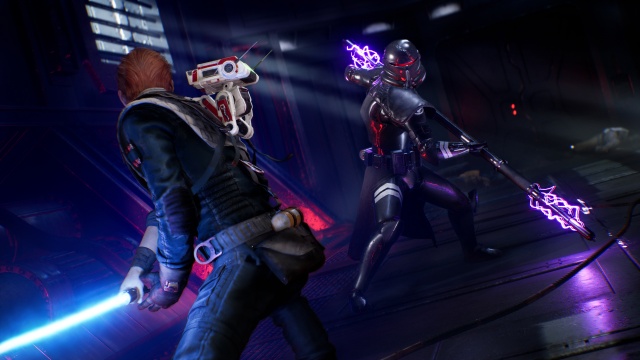 The game's battles aren't easy, especially since you'll often be facing multiple enemies at once with a variety of different weapons and attack styles. Even on the game's lowest difficulty setting you'll find yourself being challenged. Like the traversals in the game, when you get into a rhythm in battle you'll feel like a powerful Jedi warrior, a feeling reinforced by the game's fatality sequences. Let's just say that it's a good thing that a lightsaber cauterizes the wounds it makes or this would be a very bloody game.

If you're defeated in battle, you'll be taken back to the last meditation circle that you visited as these serve as the game's save points. There's a slight death penalty in that your experience and skill points earned since the last save will be gone, but you can regain them by returning to the fight and landing a blow on your killer. The Jedi meditation circles are also the locations at which you can spend skill points that you've earned in the game's skill tree which has three branches, Force powers, lightsaber skills, and a survivability tree that contains skills such as increased health. You can also use one of these points to rest, meaning you will regain all of your health and BD-1's health canister supply will be replenished, but doing so comes at the cost of allowing any enemies that you previously defeated in the level to respawn.

The game's story is engrossing and well-acted, and those who want to get even more from it have the ample opportunity to do so by tracking down all of the BD-1 scan spots and "Force Echo" replays of past events. The game's planets are huge, and it will take multiple visits before you can open up all of the pathways and explore them fully. The levels are puzzle-like in a way, and you'll spend time rotating, zooming, and panning the 3D maps provided by BD-1 in an effort to locate areas that you've missed or to find pathways to areas that remain tantalizingly out of reach.

In bringing this review to a close, I'd like to reemphasize the close kinship that Fallen Order shares with Tomb Raider - in some ways Cal is Lara with a lightsaber and he'll even be raiding a few tombs himself in the game. I can see some gamers wanting a little more combat and a little less tomb-raiding, but the overall experience will be enjoyable for most as Fallen Order is the best single player Star Wars game we've seen in quite a while.