The Division 2 opens seven months after the events of the original game, but if like me you missed out on playing The Division you won't have any problem jumping right in. The game's location has moved from New York City to Washington, DC and features a new cast of characters, so instead of playing an outbreak game you're playing an aftermath of an outbreak game and can hit the ground running. In The Division 2, the titular (Strategic Homeland) Division moves into DC to save it from the unlawful factions tearing it apart as they vie for power and terrorize the local population. The fight for the capital is a fight for the nation, and it's up to the Division to restore order.

As the game opens, you must repeal an assault by one of the factions fighting for control of the city. Once you do, the White House becomes your base of operations. The base of operations is your safe space, a place to buy, sell, and craft weapons and equipment, earn new tech, and stash your stuff. As you liberate Washington, your base will grow, offering new facilities to you and evolving into an increasingly busier center of the Washington liberation effort.

The game applies this model of evolution to the entire city. The city is divided into districts, and when you first enter these districts you'll encounter many enemy patrols and activities such as public executions - the districts will firmly be under control of the factions. As you fight the factions, disrupt their activities, and complete missions you'll see the districts change as you wrest control away from those factions. Civilians will return to the streets, you'll see trade routes open, and the enemy patrols will be replaced with civilians helping to keep order. Civilian settlements will undergo the same sort of transformation that the White House will, adding new facilities and growing in population. There is a certain amount of satisfaction that comes with seeing that your efforts are having a positive effect on the city and the civilian population. 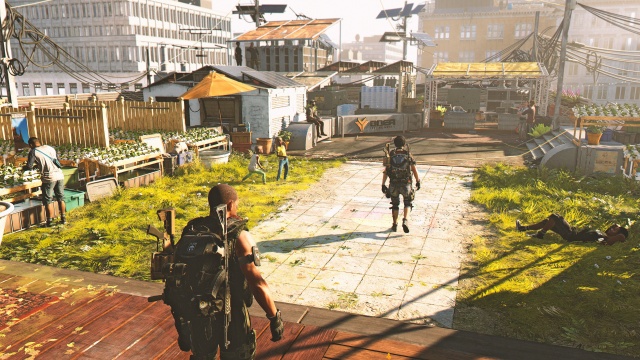 There will be a certain amount of repetition that you'll go through as you move from district to district - assaulting bases, rescuing civilians, taking out propaganda broadcast towers, and the like all play out the same way on a base level. The realistic depiction of the city helps alleviate some of this - assaulting an enemy base in a Metro station is different than assaulting one that's in the middle of the Mall - but you're still fighting your way in to face a boss and then turning around to eliminate the counterattack. The main and side missions provide for more variety in objectives, but even in those missions you can always expect to fight off a couple of waves of attackers each time you reach an open area and that a heavily armed and armored boss will be waiting for you at the end.

There is always plenty to do in the game, and you can even just patrol the streets looking for random encounters, but all of this comes at the cost of narrative continuity. The story is driven by the primary missions, which doesn't give the game a chance to deliver a full-fledged narrative and forces it to deliver what it does have in small chunks separated by hours of gameplay. The pure volume of things to do can certainly keep you busy, and there's motivation to keep pressing forward that comes in the form of the pursuit of loot, the level grind, and the satisfaction of seeing the city transform around you, but if you're looking for any kind of deep narrative or memorable characters you won't find them in this game.

The gunplay in the game stresses cover-based gameplay, with a combat style that's a mix of sim and arcade. There are a lot of weapons in the game, and they feature different effective ranges, reload times, and fire rates, but this isn't a game in which one or two shots will drop you. You wear armor that will take several shots to wear down, and then it will still take multiple additional shots to bring you down. Even if your armor is destroyed, you can carry spares that can be applied during a battle. Enemies also require multiple hits to take down, more so for those wearing armor. Boss characters are veritable bullet sponges, taking many, many clips of ammo to bring down. And while you can have two weapons and a sidearm equipped at any time, you can carry dozens of additional weapons in your inventory, switching out weapons at any time. 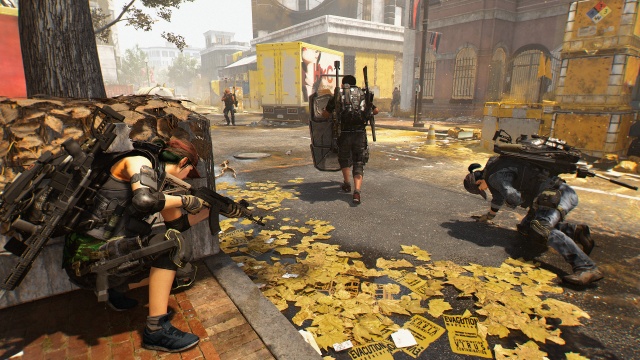 In addition to your firearms, you'll be able to have two tech weapons equipped as well. These include weapons like an automated turret, drone, and seeker mines, and they are very useful in bringing more firepower on more enemies than you can on your own. Once you deploy one of these weapons, you'll have to wait for a cooldown timer to count down before you can use it again, so you'll need to be a little judicious as to when you deploy them.

An even better way to increase the firepower on your side is to bring in other players. You can play any part or all of the game in co-op with a squad of up to four players. You can enter the game with friends, look for allies through the game's matchmaking feature, or even put out a call for help in the middle of a mission in the hope that another player answers it and lends you a hand. It's advantageous to play with other gamers because the enemy AI is quite good at moving around and flanking you. With a fireteam you can cover watch others' flanks, as well as generate a lot more bullets for those bullet sponge bosses to soak up. 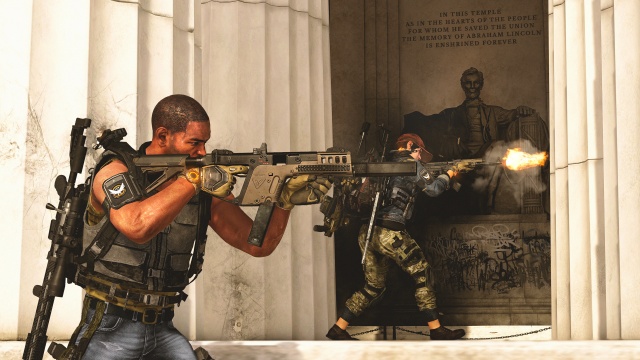 The entire game is not co-op only, though. There are specially designated areas known as Dark Zones that support PvP combat. These zones are not entirely unlike the game's other areas in that they're filled with enemy factions and are meticulously recreated areas of the actual city, but you'll be able to engage other players in these zones as well as the AI. These areas are where the best gear can be found, but you'll need to get any Dark Zone gear you find to an extraction point for decontamination before you can use it, assuming that some other player doesn't kill you and loot the gear off of your corpse first. The Dark Zones ae entirely optional and separated from the rest of the game - your Dark Zone level is even tracked separately from your overall level - so you don't have to ever enter the Dark ones if you don't want to.

Once you reach the end of the main story and max out your character level, the game goes through a transformation. First you'll be able to choose a specialization: Survivalist, Sharpshooter, or Demolitionist. Your specialty gives you access to a high-powered special weapon, a crossbow, sniper rifle, or grenade launcher, respectively, and each specialty will have access to its own tech trees. These weapons require special ammo that's hard to find, but they pack quite a punch and really help in a pinch. The other big change is that a new, more powerful faction, the Black Tusks, will invade the city and occupy many of the areas that you worked so hard to free. The Black Tusks are a very heavily armed and tech savvy faction, and you'll find that they present quite a challenge as you face them in the streets and in new missions. It's impressive that the game has this much gameplay waiting for you after you've put dozens of hours into making your way through the main and side missions and everything else the game has on offer before you even reach the end game.

Looter shooters are naturally repetitive, but The Division 2 never feels overly so. The realistic depiction of a post-apocalypse Washington that evolves as you play the game, a plethora of activities available at any given moment, and enjoyable missions all work to the game's advantage, and it will all keep you interested and coming back to the game. The biggest shortcoming in the game is its lack of a cohesive and compelling narrative, which is a bit of a shame given how the game's setting could give rise to so much more. In spite of this, it's still easy to recommend The Division 2 to anyone who enjoys a good shooter. You'll certainly get a lot of bang for your entertainment buck with it.

Final Rating: 88% - Saving Washington from itself will keep you busy for quite some time.