I did not play the original Unravel before playing Unravel 2, so I can state with confidence that you do not need any experience with the previous game to enjoy Unravel 2. However, like me, once you're done with it just might inspire you to play the original.

Unravel 2 is a puzzle-platform game with at least as much emphasis on the puzzle as on the platform. You play as Yarny, a little creature made of yarn, who washes up on a beach after a storm and immediately meets another similar creature. Yarny has the ability to unravel a bit of the yarn that makes up its body and use that yarn as a lasso, a climbing rope, and a swing. Yarny's new friend has the same abilities, and they'll need to work together to make it past the many obstacles they'll face as they chase a spark across the land.

As Yarney you can run and jump, but you'll spend more time making use of your yarn than you will doing basic platform moves. You'll see little pieces of yarn tied to objects that indicate that you can toss your yarn and attach to those points. Once attached you can climb up the length of yarn or use it as a rope swing to propel yourself over obstacles or up to ledges that sit above your reach. You can also tie down an end of the yarn, allowing you to create bridges, ramps, and trampolines. The heart of the game is in using these yarn tricks to continue your journey in places that you can't cross by foot. 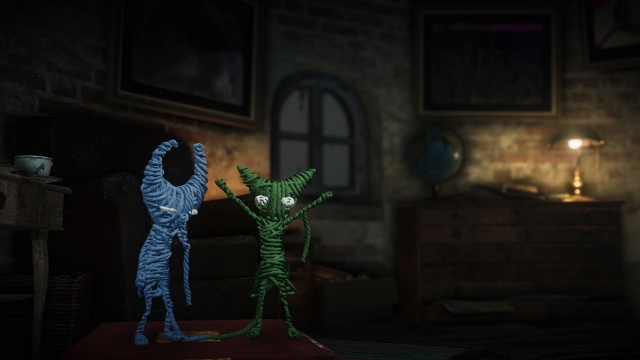 Some of these puzzles can be solved with a single yarn creature, allowing you to merge the two into one to quickly and efficiently make your way past the current obstacle. More often, you'll need to have the two work together to help each other reach the goal. You can do this on your own, using the Y button to switch between the two yarn creatures, or by handing a controller to a friend and working together from the couch, each of you controlling one of the creatures.

The puzzles can be a bit tricky at times, but the game takes steps to keep the experience from becoming frustrating for gamers who need a little help. Each puzzle has three levels of hints that start from gentile and progress to blatant to help you out if you become stuck. And if you're having a little trouble with the platforming aspects, you can slow time down with the press of a button so that the jumps and swings will rely less on quick reflexes.

The game's levels take place in a variety of environments, from pastoral countryside to urban industrial zones. The enemies of the yarn creatures are some fantastical things like electrified smoke creatures, but also ordinary animals who both can see the yarn creatures and believe that they are edible. The yarn creatures don't encounter humans directly, but people are seen occasionally in the background moving in an almost dream-like way, as if you're watching the ghosts of memories. If you pay attention to these phantoms, you'll see that the visions are interconnected and are playing out the game's story in the background, although in such a way as to leave a lot open to interpretation and to your imagination. 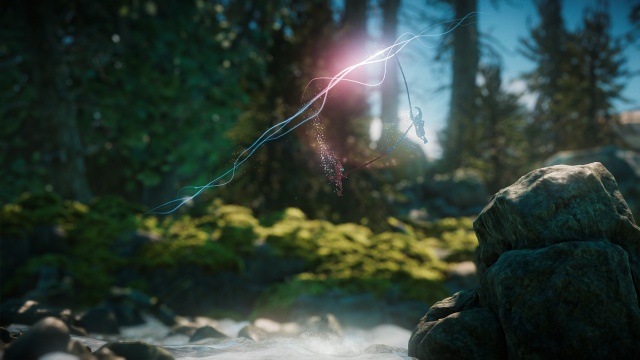 On the completion of each level you'll be returned to an abandoned lighthouse which serves as the game's hub location. You'll find the entrance to the next level here, as well as entrances to all of the levels that you've already completed. These can be played again to look for hidden sparks, or to try and speed-run the level. The speed-run is a fun way to replay a level as long as you can remember all of the puzzle solutions quickly and on the fly, but on some fundamental level it almost seems counter to the game's spirit to try and speed through it as quickly as possible. From the lighthouse you'll also find entrances to optional challenge levels. Some of these emphasizing platforming and others puzzles, but they are consistent in that they do deliver far more challenge than you'll find in the game's main story levels.

Unravel 2's gorgeous settings, clever puzzle design, and unique play mechanics make for an enjoyable game. In fact, I found that playing Unravel 2 is a great way to relax - it's the kind of game that's a good choice to play before turning in for the night. A dream-like game that makes for an easy transition to the land of dreams.