The game is set in 14th Century France. Amicia De Rune lives an almost idyllic life for the times in which she lives. The daughter of a knight who is a minor noble, she lives on a country estate and spends her days in the woods with her father learning to hunt with a sling. All is not perfect, though, her young brother Hugo is afflicted with a mysterious blood disease and her mother has devoted her life to studying alchemy in an attempt to find a cure. Amicia's life is soon shattered when the Inquisition arrives. They are desperate to capture Hugo, and slaughter everyone at the estate while looking for him. Luckily Amicia manages to escape with Hugo, and their quest to both escape the Inquisition and find a cure for Hugo begins.

The gameplay in A Plague Tale has two major components. The first is primarily stealth-based. You must stay out of sight of guards, soldiers, and the Inquisition, because if they spot you they will quickly kill Amicia. All of the stealth isn't necessarily for evasion; you'll often need to move into a favorable spot from which to unleash a stone from your sling. At first Amicia is racked with guilt over having to take lives, but her survival instincts begin to take over and she evolves into a lethal killing machine. Taking out enemies requires skill, though, a sling takes some time to reload and spin up again, so a miss often becomes a lethal mistake. 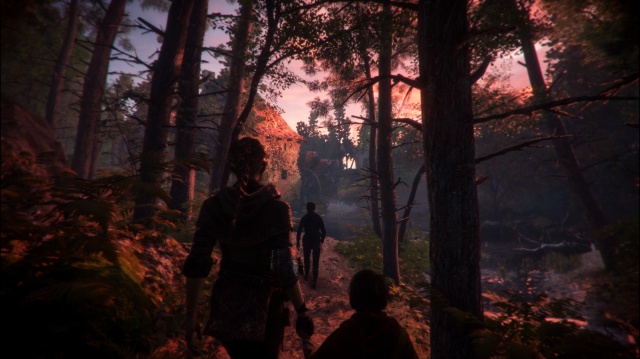 The second aspect of the game is more puzzle-focused and primarily involves avoiding the rats plaguing France. These are no ordinary rats, though, they swarm and move in deadly masses and they will quickly devour you if you come into contact with them. Their weakness is an aversion to light, if they get caught in it they die. You'll have to use this to your advantage, manipulating light sources in order to clear a path through them or trap them safely away to the side. The gameplay involving the rats evolves as you progress through the game, but I will leave it at that to avoid any spoilers because those changes are intimately tied to the game's story.

Your sling comes into play in both aspects of the game thanks to the knowledge in alchemy that you will gain as you progress through the game. You'll learn to create special tonics from the ingredients that you scavenge from the environment, and you can apply them to the rock to add an effect to it. One will cause an enemy's helmet to burn, forcing him to remove it so that you can then hit him with a rock. Another will cause the rats to swarm, moving them out of the way for a precious few seconds or causing them to overwhelm an enemy unlucky enough to be too far away from a light source. The most important ones, though, are the two that will light a flammable source or extinguish an existing flame. These will allow you to manipulate the rat swarms to protect yourself or attack an enemy.

The game is a satisfying mix of puzzle-solving and stealth action. The puzzles can be clever, but none of them are obtuse or overly difficult to solve. If the game senses that you are stuck, Amicia or a companion will make a suggestion. These won't give anything completely away, but they will give you a nudge in the right direction. And speaking of companions, you will not always be either with Hugo or alone, you'll meet several allies along the way who will accompany you on some of the levels. In addition to each having some unique abilities that help you out in a pinch, you can also command them to operate lights, levels, and such in order to help you solve some of the game's puzzles. 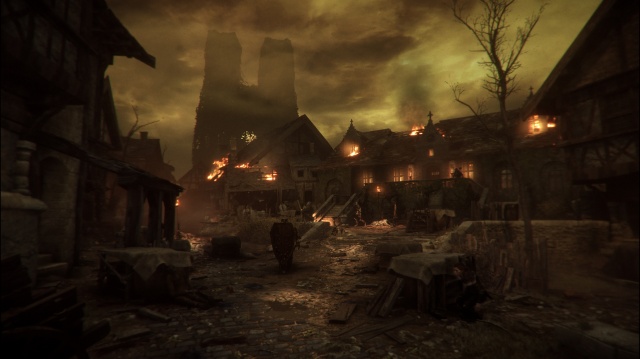 The stealth action sequences are tense, and when they go full action they can turn briefly intense. You often only have one chance to make a shot or escape pursuers, which makes things exciting. If you fail, though, the last checkpoint is usually not too far back. Some of the action sequences were challenging enough that it took me a few tries to complete them, but none felt unfair or frustrating. In fact, finally completing them always cane with a sense of satisfaction.

The game does a good job of recreating 14th Century France through its environments and through objects you can find that convey some of the history of the plague during that era. It's not completely historical, though. The soundtrack is an excellent modern take on Medieval music, but it goes beyond that. There's a supernatural component to the game that is tied to the rats, the plague, and Hugo's condition, but going beyond that here would inevitably spoil aspects of the story for you. Not all of the game's mysteries and the questions it raises are answered by the end, though, so you must either hope for a sequel or leave some of those answers to your imagination once you finish the game. The game does conclude its primary story arc satisfactorily, but you probably will be left wishing there was just one more chapter to play that would answer some of your lingering questions.

I was very pleasantly surprised by A Plague Tale. Don't let its setting or theme cloud your judgment and keep you from playing this game. It's a fun and rather unique game, and one that will compel you to keep playing it until you reach its end.

The Bad (not much, but since I should probably pick something):
New chapters take a long time to load
Story leaves many of the game's mysteries as mysteries

Final Rating: 94% - This is a plague tale that you'll want to hear.