The original Injustice was a big hit for me so you can surely bet that I was looking forward to Injustice 2. Injustice 2 adds in some additional enhancements, tweaks to existing characters, new characters and it brings along a more interesting single player game. Just like the first game, Injustice 2 is a 2D fighting game with a 3D look that is developed by Netherrealm Studios (NRS) with a full cast of DC comics characters. If you enjoyed the original Injustice then you'll most likely enjoy all the enhancements and extras that the sequel has to offer.

Injustice 2 has a total of 28 heroes and villains from the DC universe. There is also the preorder character (Darkseid) to make it 29 if you want to spend the extra money for him or preordered the game and got him for free. 13 characters from the original cast of 24 characters return from the original game and we have 15 new characters in the line-up. All Batman characters (with the exception of Nightwing and the DLC character Batgirl) return for the sequel. Poison Ivy, Robin (Damien Wayne version) and Scarecrow join the cast of Injustice 2 from the Batman universe as well. Other new characters include Atrocitus, Black Canary, Deadshot, Swamp Thing, Captain Cold, Doctor Fate, Supergirl, Firestorm, Blue Beetle, Brainiac, Cheetah and Gorilla Grodd. Some characters have the option for you to equip a new outfit that totally changes up their look and voice as well - such as Vixen for Cheetah and Reverse Flash for Flash. The character skin and voice changes but the moves and overall character gameplay is still the same.

All returning characters have some sort of changes that slightly or greatly change up their game plan from the last game. Some characters have more recovery time on their moves such as Superman's heat vision moves and Aquaman's "From the Deep" move. Harley Quinn and Joker have new character traits to make up for their lackluster traits in the first game. Green Lantern still has the same normal attacks, but his special moves have been changed quite a bit - he still retains his ring aura throw, but his ring projectile is slower and he has a new wall move and a new lantern explosion that can be put near the opponent. Wonder Woman is now more simplistic since NRS basically fused her weaponless and weapon style into one and she now has a new trait. The new characters seem like a diverse bunch of heroes and villains and all feel unique. There is a slight feeling of recycled animations every now and then, but the new characters feel different for the most part. Doctor Fate reminds me of Raven at times with his animations and Deadshot can zone just like Deathstroke only with arm guns. Swamp Thing is a very unique character - sort of like an aggressive Dhalsim. 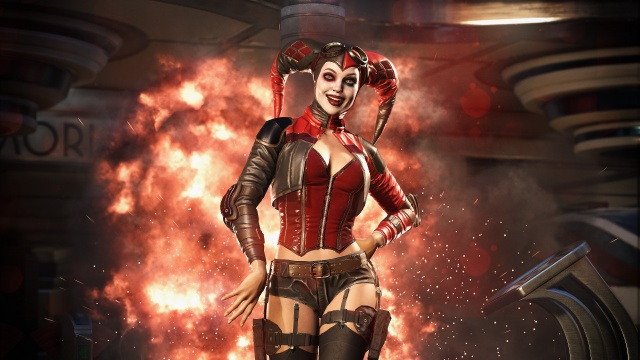 Just like the original game, each fighter has a range of basic moves, special moves, combo attacks, one super move and a character trait all their own. Meter Burning (MB) has returned once again, allowing players to tap the MB button in order to increase the power of certain special moves at the cost of a bar of meter. Injustice 2 allows for players to Meter Burn rolls and use meter to perform an air recovery during a combo. This allows a player to get to their opponent nearly instantly from across the screen with a roll and recover in the air to mess up their opponent's juggle combo. All characters still have a super move that cost all four bars to use as well. Returning characters all have different super move attack animations now. This time, once players get knocked to the ground, you can hold the character stance button to delay a wake-up just like in MKX.

The Clash once again returns, allowing for players to perform a clash while getting hit by a combo on their second life bar. Both players offer up meter in a bidding mini game that allows the defender to damage the attacker or the attacker to gain health back based on the amount of meter wagered from each player. Arenas once again crumble as characters fight on each stage. They all have many environmental interactions that were made popular from the first Injustice. This time, many of the environmental interacts are blockable but there are still a few that are unblockable. Environmental interactions seem less like free hits now and more like an extra "spur of the moment" attack just like they were in MKX.

If you enjoyed the original Injustice's story then you'll absolutely love the story mode for Injustice 2. The game continues the story of the alternate Earth where Superman and his gang of heroes and villains attempt to establish a violence free society even though they do so by killing criminals. Brainiac visits the Earth and tries to take over and Batman must make the choice to join up with Superman and his team to fight Brainiac, so basically both sides have to agree on who is the bigger threat. Cutscenes are very much movie quality and the facial features are truly brought to life in great depth with Injustice 2's new faces for each character. Superman's face is like a cross between good and evil and perfectly displays his features. All the women in the game now have a normal looking face compared to the distorted faces that some of them had in Injustice 1. There are points in the story where you can choose between two characters for battles and the dialogue after the choice will change a bit based on your decision. The story mode is actually replayable since the game offers different endings at one point in the story. In order to unlock the extra ending, you must play back through the character choice points and choose the other character that you didn't choose. Both endings are very much worth unlocking. In a way, it's hard to say which one will be cannon with the way the story of Injustice goes. 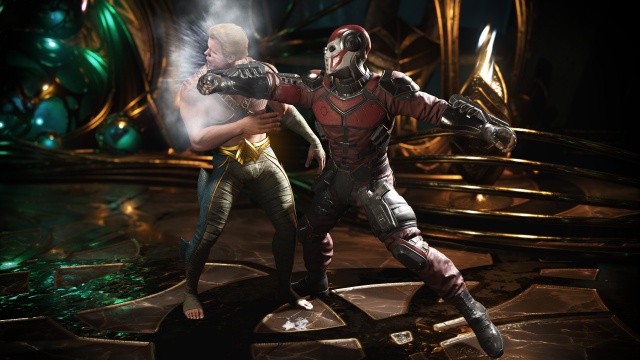 Along with story mode, single player also has a "Multiverse" mode that allows players to equip gear to fighters for extra stat boosts and play against CPU fighters. The multiverse has the usual Ladder modes, survival and time attack. The Ladder modes allow you to finish off a full ladder in order to get each character's individual ending. There are also sets of ladders that change over time, sort of like MKX's "Living Towers". These ladders will remain for a certain amount of time and offer unique gear for beating them. Besides stat boosts, gear can also offer an extra move for a fighter once equipped. In the gear menu, players can customize the colors for each fight as well. Every single portion of customization in the game must be unlocked before it can be used. All fighters have levels to gain and you'll level up that character after each fight. While in the multiverse, you'll want to stick with ladders that have opponents in them that are around the same level as you or suffer through fighting an opponent that greatly overpowers your character in defense and attack power. Equipping gear will change up the look of your fighter and you can choose to equip gear during online fights - the gear can be chosen without the stat boosts during versus fights if you wish.

There is also a new Guild feature that allows players to join certain guilds and challenge CPU opponents. Guild challenges are separate from multiverse and you'll unlock different points for guild challenges. Players can take turns fighting against CPU opponents while other players watch in the fight as a spectator. Spectators can press buttons to offer power-ups and perform small attacks (explosions) to their guild member that is currently on the battle field - all extra player help is on a cooldown so you can't spam. The guild mode can be a lot of fun with friends. Besides unlocking gear through battles, you can also unlock it by buying it with accumulated points through multiverse and guild modes. Players also unlock boxes that can be opened to gain new gear as well.

Injustice 2 has around the same type of online mode as the original Injustice and MKX. Players can meet up in lobbies and challenge each other to King of Hill or 1v1. Ranked matches are all 1v1 battles and automatically turn off the option for gear, but player matches offer the option to turn gear on or off. Player matches start with the gear on by default and both players have to turn the gear off to fight without it, so you'll be fighting with gear on, whether you want to or not, for some matches if you choose to play in player matches. NRS really should have separated player matches into "Gear" matches and "Competitive" matches or simply just have gear turned off by default since I'm sure most hardcore fighting game fans will not want to battle each other with advantage from the very start of the round. Online battles seem to play out just as smoothly as the MKX online battles with the newer netcode. The original Injustice had laggy online battles but Injustice 2's online battles seem to only lag when the host has a bad internet connection. 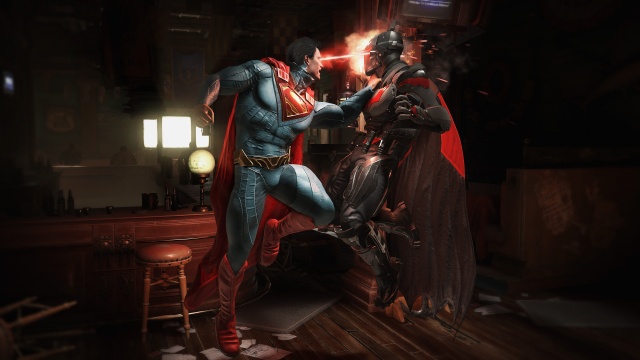 If you enjoyed the original Injustice, you're pretty much a shoe-in for enjoying Injustice 2 just as much. The game enhances nearly everything from the original game. Injustice 2 has a lot of character zoning just like the first game so you'll need to get adjusted with how to deal with characters such as Deadshot or eat his bullets from long distance for an entire match. It's always hard to call out balance issues when a game first launches, but Injustice 2 seems to have less balance issues than the first game at the moment.

The Good:
+ The story mode is even better this time around with multiple endings
+ Multiverse and Guild modes are fun for single players
+ Character faces have greatly improved over the first game for the most part
+ Online battles are significantly less laggy when compared to the original game

The Bad:
- The gear option feels forced in player matches since it is set to "on" by default and both players have to agree to turn it off or play with it on
- There are still some stiff animations and wonky animations at times
- Blue Beetle's face outside of his armor

Final Rating: 90% - Injustice 2 is now among us and it should greatly please fans of the original game.