I've built and managed all sorts of things in games before, from amusement parks to cities to nations to galactic empires, but this is the first time that I've taken on the challenge of building and maintaining a prison. After my experience with Prison Architect, hopefully it will be the last time.

The Prison Architect experience begins with its "Prison Stories" mode. While there is a narrative behind this mode, it is threadbare and serves to both give a rationale to the tutorial style exercises in each of the five levels in this mode and to convey at a basic level the developers' thoughts on privatized, for-profit prisons. The levels in this mode are slow-paced and often tedious, but playing through them is essential if you're to have any success in the game's primary sandbox mode. The simulation is very complex and the manner in which everything is connected is often poorly communicated to the player or completely obscure. Even after playing through the tutorials you'll still be woefully underprepared to successfully build and run a prison from the ground up, and you'll have to make your way through a number of prisons that will probably end up literally burned down to the ground before you get enough of a handle on things to at least manage to keep most of the prisoners and staff alive for a while. 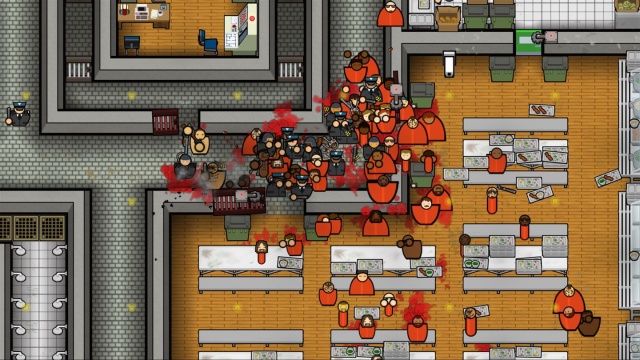 Part of the issue is that the tutorial missions are not very well-designed. You are given a task to complete and the game unlocks only those tools that are required to accomplish the task. This would be OK if the game wasn't running the full simulation environment during the exercise and instead kept everything nice and controlled for the learning experience, but unfortunately that's not the case. A lot can go wrong here, and the biggest lesson you'll learn from the tutorials is that the game does a very poor job of communicating what's wrong with your prison. For example, I was instructed at one point to use the game's bureaucracy feature to research tasers so that they could be used by the prison's guards. After following the game's directions, I selected the taser item in the bureaucracy screen's tech tree and then waited the hour of game time it was supposed to take to unlock the tasers. For some reason the research was stuck on 'pause', though, and there didn't seem to be anything that I could do to complete it. It took quite some time to get the taser research started, so I will try to succinctly relate what it took to solve the issue, all of which I had to figure out on my own with no help from the game. I figured out that in order to research tasers, the prison needed to have a Chief of Security on staff. According to the game's staff menu I had one, so that wasn't the problem. Next I learned that in order for a staff person to perform their duties, they needed an office. I searched around the prison for the Chief's office and found the room, but it was out of power. Since everything had been hooked up to the power grid earlier, I had to trace the issue back to the power generators. The power menu was locked for the tutorial, so I couldn't add more generators to solve the issue. I eventually noticed that there was a note attached to one of the generators indicating that it was wired into one of the other generators and that this was preventing it from functioning. At no point in the tutorial was this restriction communicated to me even though earlier the game had me run wires to new buildings and repair broken wire links. It was during this exercise that I had crossed some wires at some point without ever being told that I had sown the seeds for the eventual collapse of the prison's electrical grid. Making matters worse, the jail was crisscrossed with wiring and I had no easy way to follow all of the lines and look for a junction between the lines from two different generators. I simply started cutting wires, leaving entire swaths of the jail in the dark until the lights went on in the Chief's office. The Chief suddenly showed up at the office, and an hour of game time later I had my tasers. Unfortunately, this wasn't just some isolated incident with the game. This is the kind of thing that you will have to deal with on a regular basis in the game - a problem that's caused by a chain of connected issues with no help from the game in finding those connections.

The problems didn't end there, both with the design of the story levels and with annoying bugs that kept cropping up. To complete the optional objectives in one story level - and collect the associated achievement - you need to just leave the game running for ten days of game time until some prisoners complete an alcoholism recovery program. Construction workers would inexplicably leave one section of pipe missing and refuse to install it, forcing me to lay out a series of new pipe pieces to bypass the gap. On one level I had a guard who would get stuck while continually trying to walk through the walls in one corner of a shower room, and after forcing him to go to another part of the prison he made a beeline for showers and got stuck in a corner again. The game won't warn you if you accidentally clip an existing room with a new room you are placing, leaving you with two nonfunctional rooms that need to be completely razed and rebuilt. It was one thing after another like this, and in a couple of cases I had to restart a level from scratch because of issues preventing me from advancing any further. 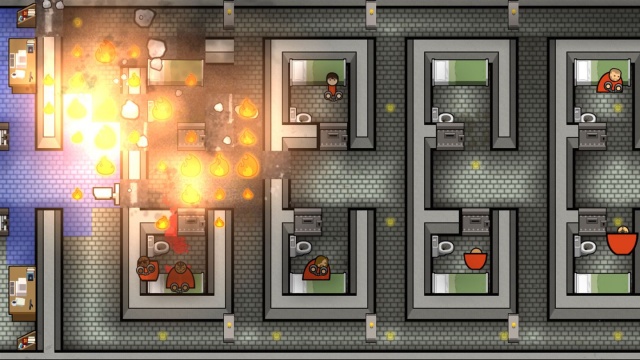 After slogging my way through the Prison Stories I had hoped that I had all of the information that I needed to start my own prison from scratch, but I soon learned that that wasn't the case. After starting to build my first prison I soon learned that there were some basic required rooms for a prison that weren't covered in the tutorial missions, my tiny population of prisoners had a myriad of complaints and I only knew how to solve a couple of them, contraband was coming into the prison at an alarming rate and I didn't know how to stop it, and prisoners kept escaping although I had no idea how they were getting out. OK, Take Two. Now I had a prison with inmates that couldn't stop rioting, leaving me to try to micromanage the guards to keep the peace and to literally put out one fire after another. And so it went with one prison after another, each of which had one problem after another driven by a complex set of hidden rules and connections and complicated by bugs.

Prison Architect is a time-consuming game, and the time spent with it feels more like work than it does play. The game is a long and frustrating slog, and for what? So I can see if I can turn a profit building and running a prison? When I've built castles, cities, or amusement parks and turned them into successful, self-sustaining creations I've always been able to look down at what I created with a certain amount of pride and enjoyment, but prisons are depressing, soul-crushing places. I could never really take pride in what I built, and I didn't have much fun building and micromanaging the prisons in the first place. Unless you are very interested in the game's subject matter and have a lot of patience, you're better off spending your time with a different game.

Final Rating: 50% - You'd better really, really want to play a prison sim if you're going to sentence yourself to playing Prison Architect.