Above anything else, what you need to take away from this review is that I absolutely loved Strider, the latest rebirth of the classic Capcom character, on the Xbox 360. I loved it. I didn't love it because I have long appreciated the character and his games, going all the way back to the NES, Sega Genesis and coin-op machines. I didn't love it because The Strider Collection rivaled both Final Fantasy 7 and 9 as one of my favorite PS1 games. I didn't love it because I'm a total sucker for side-scrollers. No, I loved it because it not only is it a fantastic example of how to bring a classic character into the modern age and make him relevant again, it is also one of the most purely fun downloadable titles I've played, right up there with Shadow Complex and 'Splosion Man (and Ms. 'Splosion Man - can't forget her). The game isn't perfect and doesn't warrant a perfect score, but it's been a while since I played a title that was this much fun.

Strider Hiryu, the game's namesake, is the hero and there are a small army's worth of robots, ninjas, robot ninjas and bosses in his path - that is pretty much all there is to the story in this reboot. Normally this kind of thing would bug me a little; I tend to need a reason to keep pushing a protagonist through waves of bad guys. The absence of a real story in this game sat well with me, especially after I finished it and sat down to write this review. Why? I realized that as much as I enjoyed this game, and all the past games, I never really knew anything about Strider Hiryu. He runs fast, he has an awesome sword and equally awesome scarf, but what's his motivation? Who knows? I don't, and it was the furthest thing from my mind when battling a giant robot gorilla or chopping my way through a floating battle fortress. No story? No problem!

Not that one makes up for the other, but Strider is all about the visuals. This is as flashy as side-scrollers get, and even just watching the game is a heart-racing experience. Strider, as always, moves extremely quickly around the screen, with sword arcs and jumps punctuating every other second of gameplay. Strider nails what Sonic the Hedgehog has found so elusive over the years; his speed amazes, but the player never feels out of complete control. Even sections with warp gates that mirror Sonic's bounce pads - Strider feels completely under player control, rather than the "sit back and watch" feeling inspired by watching Sonic race around loops and ricochet off springs. And all this action runs as smooth as silk. Strider masterfully incorporates the action and speed of the original games with the visuals of today, and is a bounty for the senses from the first second to the last. 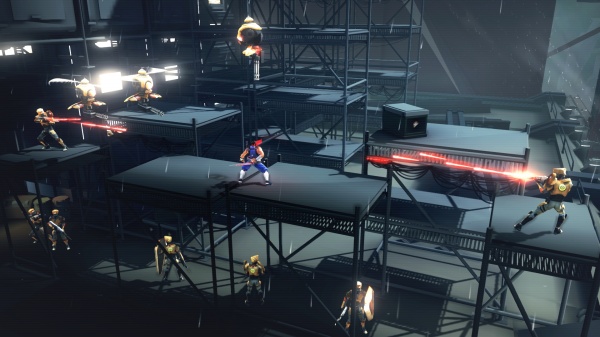 Closely tied with the visuals is the gameplay; things look great and reflect how nicely the game handles. By adding a little something extra - upgradable attacks, hidden secrets and special moves - Strider brings a fun game of run/jump/attack up to modern standards. If I have a single beef with how the game plays, it is the uneven jumps in difficulty. Strider won't make any serious action fan cry with frustration and the game is manageable from beginning to end, but some spots seem ridiculously easy and are immediately followed by some very tough sequences, usually bosses. The game seems thrilled to throw all manner of health pickups and power ups to the player when they don't need them, in the stages themselves, but immediately cut off the spigot when immensely strong enemies crash the party. A decent checkpoint system helps ease frustration from an encounter with and complete destruction by a boss, but to see the difficulty ramp up and down a little more smoothly would have been a better fit. I really can't see myself being upset with a game for being hard, so long as things are fair and Strider is more than fair. But that didn't make me any less upset at my third and fourth loss during the game's final boss battle, a real killer.

At about seven hours, Strider is the perfect length for a downloadable game. You can extend that time by going back for pickups and upgrades you may have missed, and the game gives you a series of races to run after things are wrapped up, so if you want to keep playing you can (I didn't; I found the timed races more infuriating than fun). For as long as it lasts, the game is supercharged fun, wowing the eyes and (sometimes) testing your skills. Like I said, I absolutely loved Strider's introduction to this new generation of systems and gamers. It had a hiccup or two, but this is the kind of side-scrolling fun that reminds us why these games are classics in the first place. Strider easily stands with the past games in the series, most, if not all, other side scrolling action games and downloadable games as a whole. Definitely give Strider a look. Now, where is my PS1? I have some Strider Collection to play...

Final Rating: 89%. The right way to update a classic.