Every word you'll read in this review was written with a heavy heart. After following the Mass Effect trilogy since the first game hit the Xbox 360 in 2007, it is tough to see the adventure reach its end. Even when writing the ME3 review, I knew there'd be some DLC down the line to reignite that spark, but this is it - the last time I'll get to share my thoughts on the space opera that, I'd argue, was better than Star Wars and Star Trek combined. Sure, there is a fourth (and probably fifth and sixth) game coming, but it is widely know that this, the Citadel DLC pack, is the last time we gamers will live through Commander Shepard's eyes. It has been a great ride and the Citadel DLC brings it all to a great end. 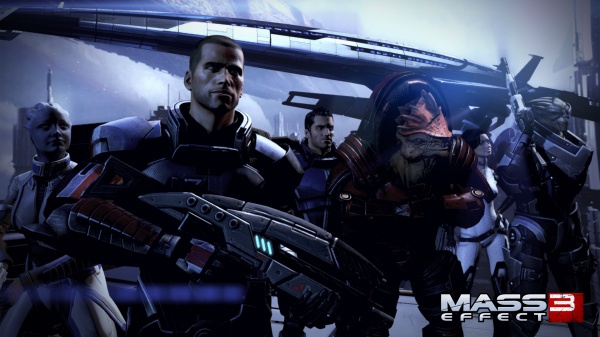 This review is going to somewhat shorter then normal, as I couldn't live with myself if I ruined Citadel's plot. All you really need to know going in is when it takes place in the greater story. I'm not sure if you can access it earlier, but the timeline fits best as one of the last things you'll do before your final battle with the Reapers on Earth. For me, it was as simple as loading my pre-point of no return save and diving in. We all know what happens to Shepard in the end, so, yeah, you'll have to start things before the final events.

I'm realizing that those on the fence may need a bigger push to download this for themselves, so I'll give you this tidbit: Citadel brings back almost every single loved cast member from across all three previous games (provided they are still alive in your save file), and gives them a fitting and funny farewell. This mission feels more like a cap to the series than the given ending, or even the reworked ending, could ever manage. It's a blast to see all those familiar faces again, and there is a squad-based combat section (much like the end of ME2) that gives players one last chance to step into Commander Shepard's shoes and lead the Normandy crew into battle.

If I've got one complaint with the Citadel DLC, it is the manner in which you'll get it. To obtain the DLC, you must download two separate files from Xbox Live, and the instructions given on how to do so aren't exactly clear. Nor is it clear why the pack was split into two pieces, but I have to assume it is because each has a file size of about 2 GB. Between this and the previous expansions, you are looking at nearly 20 GB of space necessary to own it all, and that is a lot for those who don't have much storage space to spare. I'd make the argument that it is worth deleting a few things to make room for Citadel, but that is your call.

Mass Effect 3 pissed off a lot of people. Critics argued it didn't contain the kind of payoff people expected after three lengthy RPG adventures. BioWare went back and reworked the ending, but the unhappy fans still didn't think it was the kind of reward they deserved for all the hours invested. The Citadel DLC, the last we'll see for this great trilogy, should shut those people up. It gives ME vets everything they wanted in the game's ending, namely a return on beloved characters and some effect on what their choices thus far hath wrought. It is heartfelt, exciting, funny, sad, happy, nostalgic... think of nearly any positive adjective and it fits with the Citadel DLC. If Mass Effect 3 is still on your shelf, download this now and witness the payoff you always hoped for.

Final Rating: 95%. It's the ending to the series that you always wished for...