The LEGO games just keep coming, and they just keep getting better. Last year's LEGO Batman 2 gave us a living, breathing Gotham City to defend and LEGO The Lord of the Rings opened all of Middle Earth to be explored. This holiday season we have LEGO Marvel Super Heroes to enjoy, and it manages to one-up LEGO Batman 2 and be the best LEGO super hero game yet - and given the track record of super hero games in general, it stands out as good super hero game, LEGO or not.

The game opens with the Silver Surfer surfing the cosmos to find a planet for Galactus to eat. When he accidentally crash-lands on Earth, he scatters powerful Cosmic Bricks on the planet. Dr. Doom wants to use them to construct a weapon, the Marvel pantheon of heroes wants to stop him, and away we go. The way that the game places its storyline after the Battle of New York that was fought at the close of The Avengers movie (and also makes a few references to the Marvel movies released since) almost makes it seem LEGO Marvel Super Heroes may know a little about where the Marvel movie arc is headed. However, the game keeps things light on the story side of the equation, so even if that's the case don't expect the game to give away too much. And, this being a LEGO game, every cutscene is played for humor above all else.

If you've played a LEGO game before, which I'm sure most of you have, then you already know all of the gameplay basics here. The game's a platform brawler in which you control LEGO minifigs (or bigfigs in the case of The Hulk) as they make their way through a LEGO world, smashing some LEGO things into bricks and using bricks to build other LEGO things, with your progress periodically impeded by puzzles, enemies, and bosses. There are also plenty of hidden objects to find, some of which require skills that only certain minifigs possess and won't be obtainable until you tackle the level again with a different set of minifigs outside of the storyline. The gameplay's not complicated - you'll catch on to it all within minutes of starting the game - but it sure is fun. The level designs are imaginative and while the puzzles aren't too difficult they're enjoyable to solve. 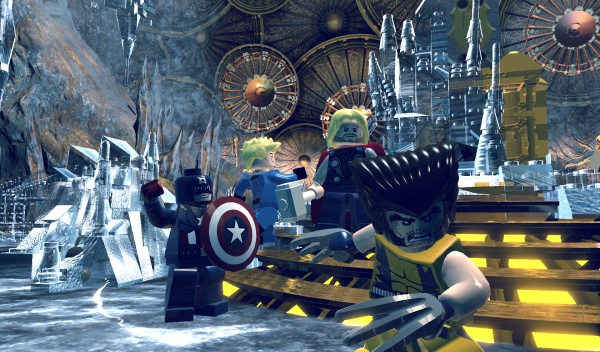 Superheroes spend a good deal of time battling criminals, evil-doers, and monsters, and the heroes of LEGO Marvel Super Heroes are no different. Fights in the game are pretty much button-mashing affairs, enlivened a bit by the ability to build consecutive hit combos and by the various styles of the game's superheroes. Captain America can strike distant enemies with his shield, Spider-man can string foes up with his webs, and Mister Fantastic's wild elastic attacks are certainly fun to watch. The game does a good job of mixing the characters' powers and special abilities to keep its huge roster of playable characters from feeling like a legion of clones. And while on the topic of roster size, the game deserves credit for going deep into the Marvel Comics roster well beyond the characters made famous by the films. Everyone knows Captain America and Thor, but how many know Captain Britain and Beta Ray Bill? It's a treat for comic fans and it helps introduce some of the more obscure characters to a wider audience. And, yes, of course Stan Lee makes his appearance in the game as well.

The game's story missions only account for about 20% of the game, which gives you a good idea of how much there is to do in this game. All of the missions can be replayed in a "Free Play" mode which lets you bring in any character available on your roster to help you find all of the secrets on each level that were inaccessible to you the first time through. You also have free reign to roam the streets of New York, a surprisingly large and detailed LEGO recreation of the real thing. You can just run around smashing things to collect more pips to pad your bank account (although smashing apart everything in sight for personal gain feels like a decidedly non-heroic thing to do) or take on the numerous side quests available in the game. Some of these are simple fetch-it quests, but there are plenty of battles to fight and a few pretty clever distractions as well.

I don't have many complaints about the game, and most of those are control related. The game overloads all of the available actions on the face buttons, which was probably done to keep things simple but can lead to accidental actions when the game doesn't quite sense the context. For example, it's easy to accidentally switch characters when you were actually trying to hop into a vehicle with the first one. Also, the controls feel a bit awkward when you're controlling a character with the ability to fly who is in flight. Overall, these issues proved to be more minor inconveniences than game-breaking problems or sources of frustration.

LEGO Marvel Super Heroes is easy to recommend to both casual and dedicated comics fans. It sticks pretty close to the time-tested formula for LEGO games, and I'm sure that most fans of the series wouldn't want it any other way.

Final Rating: 90%. Why did we have to wait so long before they made a LEGO Marvel game?