Forza Horizon does indeed mark a new horizon for the franchise. The simulation-focused series loosens things up a bit, both in terms of the racing model and in the openness of the game's world and your progression through it. Hardcore racing sim enthusiasts will probably balk at these changes, but those who enjoy street racing games will be happy to finally welcome Forza to the club.

Forza Horizon takes place in a fictionalized version of Colorado. You get views of the Rocky Mountains, roads that cross mountains, prairies, and dry landscapes, a city and a mining town, and other typical Colorado landmarks and environments, but you don't get to race through the streets of downtown Denver or race to the top of Pikes Peak. At the center of the map of this version of Colorado sits the Horizon Festival, a kind of Coachella meets street racer fan outdoor party. Your part in all of this is that of an unknown racer who qualifies for the final spots in the event's field of racers, thus earning the right to enter into the festival's races and giving you shot at emerging as the top street racer at the event. If you're thinking that that all sounds rather clich�d, then you're right; the generic and by the numbers story in the game is its weakest part. Luckily we didn't come here for the story. What we're here for is the racing, and on this point the game succeeds.

At any given time you'll have a few races open to you through the Horizon Festival, which like all events in the game take place on designated stretches of roadways on the world map. The races mix things up between different environments and road surface types, and you'll face the typical car class restrictions on entry, but Forza Horizon does a good job of keeping most of the current events open to you as you progress through the game. Beyond the Horizon Festival events themselves you're free to roam the countryside taking in the scenery, but there's more to do out there than sightseeing. You might come across a rival driver who you can challenge to an impromptu race. You can find hidden barns containing exotic cars just waiting for someone to come along and take them. You can look for speed cameras and try to set a speed record (or beat your friend's record) as you race past them. And even as you're just driving around looking for new things to discover you can be earning popularity with the Horizon Festival crowd by showing off your driving skills and daring by drifting around corners, narrowly missing cars on the road, or catching air off of jumps, among other things. As you accumulate points for doing these things you'll move up the festival's popularity rankings, earning you new sponsors and other benefits. 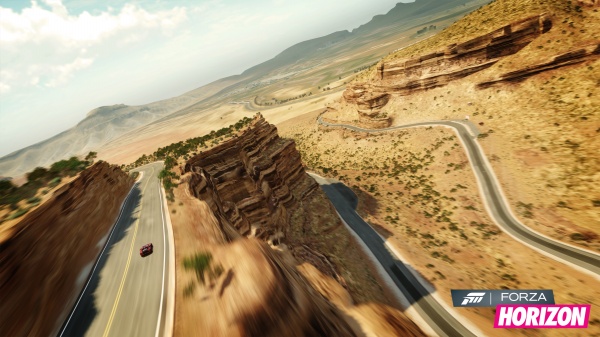 The other form of career progression is handled with the game's wristband system. Earn enough points from doing well in races at your current level and you'll earn a new wristband that opens new races to you. The good thing about this system is that you're not locked into coming in first in every event in order progress, so you don't ever reach a point where an event that you're having trouble with is effectively ending your game for you. The wristband levels also effectively act as vehicle class tiers, so you'll have to work your way through a number of wristbands before your start racing with Italian sports cars.

As for the racing itself, Forza Horizon does have more of an arcade feel to the racing than prior entries in the series but it's far from swinging the needle to the opposite end of the dial. The game makes it easier to navigate curves with a color-coded racing line that shows both the line you should be taking through a turn and when you should be braking, coasting, and accelerating. Traction control and other assists help ensure that fledging racers are able to hold their own from the beginning of the game, but these assists can all be disabled for those who prefer a more sim-like experience. If you do disable these assists, the game will reward you with more points per event which will allow expert drivers to unlock the upper tiers faster. Unfortunately, those who like to make tuning part of their sim experience will be disappointed to find that Forza Horizon doesn't let you tinker with much more than your cars' paint and vinyls. The AI competition is decent but far from great, with most of the competition coming from the game's rubber-banding. While this means you'll rarely find yourself completely out of race, it also means that your competitors will always be nipping at your heels even when you run a near-perfect race.

While the single player roaming mode is aware of your friends' performance in some areas such as the speed camera challenges, for the most part multiplayer exists as a completely separate entity. While you can setup and race in standard races to be the first to the finish line, the majority of modes are more like games than races. When you're playing king of the hill with sports cars, you'll know that you're not in your standard multiplayer racer anymore.

Forza Horizon is a good first effort at an open world racer for the series, but it's not quite top-tier in the category yet. A decent story would be a good place to start. The open world rendition of Colorado is gorgeous, but it felt like there was a bit too much empty space. I wish there was a bit more traffic on the roads and that there was a bit more to do on some of the longer stretches of open road. Most of all, I wish that the open world of the single player was indistinguishable from the game's multiplayer action. Overall, though, the game is certainly fun to play and you'll find yourself having a good time on the highways of Colorado as long as you're not looking for a hardcore driving sim.

Final Rating: 84%. Not a bad effort for a street racing rookie.