WWE '13 is the second game in the WWE series and fifteenth game in the combined series of WWE wrestling titles. WWE '13 is the direct sequel to WWE '12 and it adds upon the new features established in WWE '12. WWE '12 brought a big change to the controls for the series that made the game easier to pick up and play and WWE '13 makes the action even easier to handle with its greater focus on smoother wrestler animations.

The main modes in WWE '13 are Attitude Era and Universe. It still has an instant play option for battling it out in a one on one, two on two, triple threat, fatal 4-way, 6-man, handicap, specialty or king of the ring match. The returning Universe mode is basically the same as it was in WWE '12. A player has control over a setup of WWE events such as Raw, Superstars HD and Smackdown and can play matches, simulate them or interfere. The event playlist plays throughout a full calendar year just like before.

WWE '13 does away with Road to Wrestlemania and brings in a new single player mode called "Attitude Era". This single player mode is much better than Road to Wrestlemania in the past few games. Attitude Era lets you play through several matches from WWE 's history that spans back to 1995. You can relive highlights from WWE back when it was split up into WWF and WCW during their Monday night wars between WWF Monday Night Raw and WCW Monday Nitro. D-Generation-X, The Rock, Mick Foley, Steve Austin, Kane, The Undertaker and Bret Hart can all be played in this mode throughout Attitude's Era's seven historical chapters. The matches get straight to the point with the actual match and have little drama in between them.

Matches have bonus objectives that can be performed during the match in order to unlock extra content in the game. Every match has some sort of new objectives to aim for such as hitting your opponent with a chair or weakening each opponent in a tag team match to a certain degree. The mode sometimes has secret objectives that are revealed in a match once the other objectives are complete. Attitude Era has several unlockables that can be unlocked by progressing through it. Unlockables include extra wrestlers, outfits, pictures, old-school videos, and extra arenas. Besides having more variety in the wrestlers you can control, Attitude Era is overall a great mode to show off the more important events from WWE 's past. It's far more interesting than Road to Wrestlemania's single player mode in WWE '12. 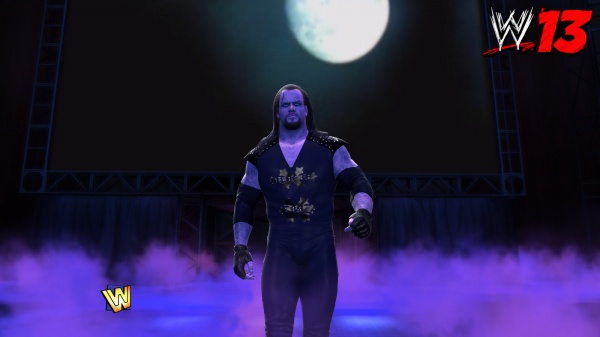 The roster includes 47 playable wrestlers from the start this time and has several unlockable wrestlers that can be gained by progressing through Attitude Era. The starting cast includes 40 males wrestlers and 7 divas. The superstar selection screen has several locked wrestlers from the beginning. There are a total of over 30 locked slots for extra male wrestlers that can be unlocked in Attitude Era and 4 slots for Divas. The older version of some wrestlers can be used in WWE '12 such as "The Rock '98-99" version of The Rock. Characters have extra unlockable outfits as well.

The graphics have improved a bit from WWE '12. The wrestlers look about the same as they did in WWE '12 with some minor enhancements here and there but their movements are slicker in WWE '13. An actual match is much more fun to watch this time since the wrestlers' animations are more life-like. Wrestling holds and a wrestler's overall movements in the ring are much more fluid than they were in WWE '12. Entrances for wrestlers look just as good as they did in WWE '12 - it's like seeing the actual entrances on TV. WWE '13 recreates some of the entrances for older superstars in its Attitude Era mode also.

The overall controls in WWE '13 seem much easier to handle this time. Since I don't play wrestling games that often, I constantly have to relearn the control scheme, but WWE '13 was easy to jump into after just a few matches. Attacks seem to autotarget an opponent better this time also. The game still has the returning limb targeting system that was introduced in WWE '12 and it still works just as well in WWE '13. It doesn't take much effort to activate some very painful and flashy holds in this game. 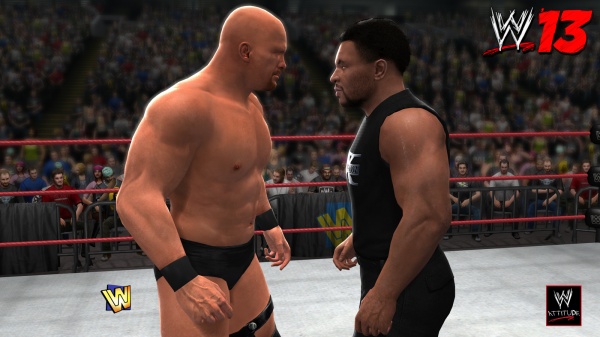 For the soundtrack, the game has the usual licensed tracks from wrestler themes. The commentary for matches is just as good at it was in WWE '12. The commentators sound like they are having an actual conversation with their phrases. There was one tag-in line that was constantly repeated during tag matches however, so it is slightly limited in some areas.

Reversals are always a big part of wrestling games and WWE '13 helps a player realize the timing better for each reversal than past games. When the RT button is tapped to perform a reversal, text will display that will let a player know if the reversal was successful or if the button was tapped "too late" or "too early". This really helps out for the timing of the reversals. It's much easier to learn the precise timing for reversals thanks to the on-screen text that displays this time.

The game still has the usual Creations mode. A player can create a superstar, entrance, move-set, special move, story, arena, logo or highlight reel. The superstar creation option offers about the same customizations as in WWE '12. The game still allows a player to customize an existing superstar. Players can still upload their superstars, arenas and stories to an online server. One unique part about the online this time is that players can allow the CPU to fill in for players that don't join a session, so now you don't have to wait for the full player amount to join in certain online sessions!

WWE '13 improves upon WWE '12's new features and makes everything better overall. The new Attitude Era is a very welcome addition to the single player and the Universe mode is still just as good as it was in WWE '12. The greater focus on wrestler's animations makes matches much more pleasing to watch this time while playing. The roster is very expansive and there are several unlockables that can be unlocked through Attitude Era mode, so this game has quite a bit of content!

The Good:
+ Attitude Era is a very welcome single player mode that gets straight to the point when compared to Road to Wrestlemania from past games
+ The action in the ring is more fluid
+ Reversals display messages to help out for the timing of each one

The Bad:
- Many wrestler models haven't changed much since WWE '12

Final Rating: 90%. WWE '13 changes up the gameplay controls and makes the overall wrestling experience more enjoyable than previous games in the series.