If I had to describe CastleStorm in five words, those words would be "Angry Birds meets tower defense." Wow, that was tough, OK, review finished. Well, not really, but if you hate Angry Birds and/or tower defense games then you're excused from reading any further at this point. Still with us? OK, here are the basics of the game...

CastleStorm features two castles perched on either end of a 2D, side-scrolling battlefield. As king of one of those castles your goal is to utterly defeat the king of the other castle, which you can do in one of two ways. The first is to use your ballista to bring it crashing down to the ground. The ballista is a versatile weapon that can be loaded with a variety of projectiles, several of which are particularly effective at knocking down castle walls. Select your ballista with A, load up the desired ammo using the shoulder triggers, set the projectile's arc with the left stick, and then press A to fire again, hoping all those hours that you spent playing Angry Birds will help you to know just where to fire to cause the most damage. 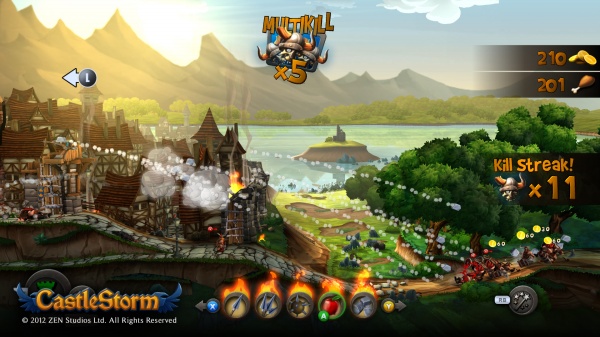 The second way to win a battle is to capture the enemy's flag from the center of their castle and bring it all the way back to yours. To accomplish this you'll need to spawn various types of troops that can try to survive the enemy's ballista fire, make it through the enemy troops coming in the other direction, bash down the castle's door, grab the flag, and then survive everything again on the return trip. Just be sure not to hit your own troops out on the battlefield while you're trying to stop enemy advances.

Rounding out your arsenal of weapons is a set of spells that can do things like heal your troops, bring magical swords down on the heads of enemy troops, or call forth a hero onto the battlefield. When you cast this last spell you get to take on the role of the hero yourself, smashing through enemy ranks with your sword or launching arrows in their direction - although the controls for unleashing arrows are a little awkward, so you'll probably just stick to bashing heads.

Adding an additional layer of strategy to the game are the castles themselves, which can be constructed by putting together different types of rooms that carry bonuses such as a higher troop cap. Of course, if your opponent knocks out a room with a few well-placed ballista shots, you'll lose any bonuses that it provided you with. The game comes with a good number of prebuilt castles for you to use, but if you want to design your own an easy to use castle editor is included.

The game has a single player campaign that has you fighting a series of battles, often varying the gameplay by disabling your ballista in one battle and forcing you to fight without troops in the next. There are also some bonus missions that vary the gameplay, such as arena battles in which you control the hero against waves of enemies. As you complete each level you're given a rating based on how well you did and are rewarded with gold that can be spent upgrading troops, projectiles, spells, or your castle. Leaderboards for every level in the game will provide you with some incentive to replay levels and beat your friends' or strangers' best scores.

Other game modes include an endless wave of enemies survival mode and a skirmish mode which pits your castle against another controlled by the AI. The game can also be played in a two player mode online, but any upgrades earned in the single player campaign do not carry over to competitive play.

The game's complicated control scheme takes a little getting used to, but for the most part the developers have done a good job of taking a game that begs to be controlled by keyboard and mouse or touchscreen to a console. Larger battles can be a little hectic to manage, particularly when it comes to trying to quickly aim the ballista when it is sitting off-screen, but the control issues are mostly manageable.

Overall the game is a fun mash-up of genres - genres more typically found on mobile devices than on consoles - and a pretty unique entry in the XBLA game library. Even the most hard-fought battles can be finished within five minutes, so it's a great game for those times when you only have a few moments available for gaming. On the other hand, you can certainly lose hours playing "just one more level" with the game. So unless Angry Birds makes you really angry, go out and have some fun storming a few castles.