Reviewing NHL '13 this year is a bittersweet affair for me. I am a long time hockey player/fan and the ongoing lockout situation with the NHL currently has the first part of the season cancelled with no resolution in sight. On the flip side of that EA has announced another installment in the NHL series that promises more than just a simple update from the previous year, including features like True Performance Skating, Hockey IQ (improved AI), NHL Moments Live, expanded goalie controls and animations, an online GM mode, plus a host of other improvements to the already existing feature set from previous years. So let's take a closer look and see if NHL '13 will be enough to keep fans happy while the real world NHL works to ruin its image.

NHL '13 takes a similar stance on presentation this year with familiar menu systems and a refreshed playlist to jam out to while setting up any of the various modes on your way to the puck drop. One of the bigger changes this year is emphasis on your favorite team, putting a logo front and center as you load up the first menu screen, with a banner lineup of key players off to the side. EA is also directing the viewing experience to be more TV-like in nature, showing off an actual clip of some moment from hockey history within the first few seconds of hitting the main menu as well. When I first saw this I thought it was going to be a placeholder for actual highlights once the regular season got under way, but I quickly realized that it had a much cooler intent, which is to introduce you to the latest NHL Moments Live scenario that can be downloaded and relived (or rewritten) in game. It should be noted that while NHL '13 is obviously focused on the NHL, there are seven leagues from around the world (NHL, AHL, ELH, DEL, SEL, NLA, QMJHL, OHL, and WHL) that can be played in and pulled from in the various game modes.

No matter what game type you pick, whether it's the revamped Winter Classic in Philadelphia, Be A Pro, Shootout, Team Practice, World Tournament, or a simple Play Now game (just to name a few), you will instantly notice some familiar loading screens with a touch of updates to give the look a more broadcast-like feel. Once the puck drops though you'll have to stay on your toes if you want to keep ahead of the revamped Hockey IQ (AI) that allows each computer controller player on the ice to have full awareness of every other skater. Gone are the days of AI following a scripted path regardless of others' positioning, which have now been replaced by quicker intelligence that adjusts on the fly to match more closely how a real life player following his team's system would react. What this really means is that if you're playing the game in a true simulation mode, you really have to pay attention to the current strategies set for your offensive and defensive lines. You won't see players in the NHL regularly skate right up the middle (or even along a wing) without a lot ton of harassment (and more than likely a big hit or being completely stripped), and the new AI does a pretty good job of simulating that experience and eliminating a type of play deemed less authentic found in previous years. On multiple occasions I was forced to dump and chase, cycle with some proficiency, and work the point men if I wanted to have any chance at even taking a shot on net. While that improvement was exciting to see, probably my favorite new addition is the True Performance Skating system, which is basically EA's way of branding a technology that now takes a players skating skills into account (top end speed, turning, etc) as well as cleaning up the entire physics model (players no longer randomly float sideways or are allowed to make unrealistic cuts at high speed without losing an edge) to make for a truly realistic experience when deciding the who and when of getting up the ice. As someone who gets on the ice a couple times per week, I can vouch for this as probably the strongest in-game improvements. I'm not quite sure how to explain it, but pretty much every aspect in how the players move, starts/stops, differences in stride with/without the puck, down to the smaller differences in how far a skater will lean into certain strides or how far a leg kicks out depending on that stride, it all just feels very lifelike. You can also completely blow out a turn and lose your edge if you try to do something crazy like cut in too quickly after a race from one end to the other. Again, difficult to explain but if you're a skater it's something you'll notice right away. Goalie controls and animations have also been expanded on greatly in NHL '13, allowing for more dramatic looking saves (and even more amazing goals) than ever before. It took me less than five minutes of gameplay to witness some amazing new highlight material and I keep seeing something new every time I play. 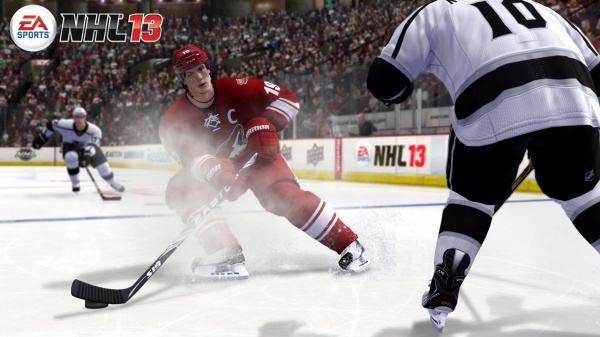 I'm not quite sure how the developers had time to include as big of a visual overhaul to the game as they did with the rest of it, but somehow it got packed in and it looks amazing. The player models in this game are the closest I've ever seen in any hockey game, and the stadiums have all had a facelift as well. EA has included an HDR lighting system, which I recently learned allows for a greater range of contrast to be displayed and essentially makes for a more realistic looking picture. The replay quality and various angles to carry on the broadcast-feel torch have been touched up and are looking great, as well as a new in game camera angle that is supposed to make it look like you're watching an actual game but I have to admit that I had some trouble orienting my controller to this mode and even though it looks beautiful I think only time will be able to tell how popular this becomes. I also noticed that a few little details have been updated as well, like ice spray that now sticks to the glass and glass that actually shatters in a pretty awesome way when you hit it hard enough with a player or puck.

I've never really had much interest in GM modes, but with all of the potential free time coming up this season (and the new features), I'm seriously considering the new GM Connected mode. You can now play, coach and manage one of 30 teams (with up to 25 players per team) for a total of 750 competitors in a single league. Add in fun extras like a mobile companion app to carry around with you to keep track of stats, trades, and lots of other stuff and you've got a truly impressive mode that could probably sell as a separate game on its own. Speaking of separate games, it's worth noting that this year's installment comes with the full version of 3 on 3 NHL Arcade, which normally sells for anywhere from $5-$10 on XBL. I already own this fun and over-the-top title, but it's nice to see that they've finally just included it (the demo in previous years was pretty much the full version anyway). My one remaining gripe with the NHL series is its default set of game settings. I don't know what it is, but things like game speed, shot accuracy, passing and hitting power have always been annoyingly out of tune to me. I know why they default this way (to prepare you for the standardized online game settings), and while it's true these can be adjusted I've just never been a fan. This year though, the game offered to import my settings from a NHL '12, saving at least 10 minutes of extra fiddling, making that part was quick and painless. Others might complain that the menu system remains sluggish online, or that NHL Moments Live doesn't have complete rosters for older scenarios (i.e. playing as Gretzky to score some historic goal surrounded by current day players), but to me these are either a wash or something to improve on next year. Bottom line, NHL '13 easily surpasses the incremental stepping feel of previous years and delivers a major upgrade to the series (one that I've been waiting on for probably three years). It's a big enough improvement and almost realistic enough that I'm considering replacing the real life regular season (if it ever happens) with an online league or two.

Final Rating: 98%. NHL '13 delivers a massive update to the series that has been long awaited by fans.