If you've been following the development cycle of Metal Gear Rising: Revengeance then you'll know that it was first revealed in 2009 under the name of Metal Gear Solid: Rising. The original game was being developed by Kojima Productions, but was later given over to Platinum Games and the name was changed as a means to show that the team was seeking vengeance on their failed attempt. Metal Gear Rising is the first full action title in the Metal Gear universe without the focus being on stealth. The game features combat with melee weapons but there is still plenty of that Metal Gear universe surrounding it to make it appealing to a Metal Gear fan.

Raiden from Metal Gear Solid 2 and Metal Gear Solid 4 serves as the main character for Rising. We rejoin him four years after the events of MGS4 while he has his new cyborg enhancements. From the start, Raiden is injured greatly because of a terrorist group known as Desperado and he seeks vengeance against them and their goals that he learns of. Rising goes into Raiden's history that we know from MGS2 and MGS4 and gives more backstory on his character as the game progresses. The characters and overall character design in Rising is fantastic. Raiden's squad resembles a type of team that Solid Snake would have and he almost always has communication with them over codec, so a player can call on them several times during a mission for advice. Raiden can even save by calling on the female member of his squad.

The dialogue is much like any other Metal Gear game that I have played. It has bits of humor, seriousness and much depth. The voices for the character are all well done - Raiden is still voiced by Quinton Flynn. The cutscenes in the game can get quite long but they are not near as long as they were in MGS4. Most of the time, the cutscenes get right to the point. The game looks beautiful and runs very smoothly. I only had vague hints of slowdown when action got tremendously heavy. Character models are detailed and solid. This game really wants to "wow" you at times with its action scenes. The music is some of the best lyrical music that I have heard in a Metal Gear game. Boss fights and normal enemy fights often start up a different lyrical track that fits the action taking place rather well.

Now, let's get down to the meat of the game. The combat! The combat of Rising is hack and slash at its heart, but it takes a different approach to the usual button mashing. The game requires a player to learn to parry in order to survive, and boss fights require this technique in order to beat the boss. Parrying is performed by pressing toward the enemy along with the main attack button. Raiden will raise his sword and attempt to deflect the move of the enemy. The parrying is not hard so long as you have an idea of the way your enemy will attack, so you sort of have to watch an enemy at first to know the way that enemy will attack. 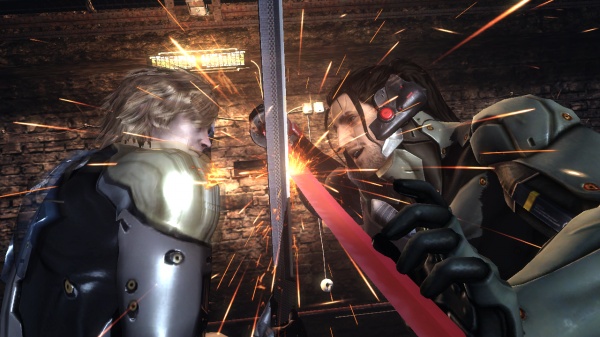 The main enemies that Raiden will face are human cyborgs. He will also face off against Gekkos that return from MGS4. There are a few other different types of robotic enemies that he will face as well. The boss fights in the game are truly epic. These boss fights are quite memorable and have many different phases. The game almost always changes up the variety of action during a boss fight, such as requiring Raiden to run along missiles or run up a building to get away from a boss' attack.

Raiden has a ninja run that can be used to run faster and scale obstacles very quickly. While ninja dashing toward a higher platform, Raiden will automatically leap up to that platform. Raiden can enter a stance called "Blade Mode" which is a sort of bullet time where a player can freely slice in any direction with Raiden's sword from close range. This stance reduces Raiden's energy, which must be recharged by attacking foes with his sword or by replenishing it with an item. The direction of the slice can be controlled with the right thumbstick or the main attack (horizontal slash) or secondary attack (vertical slice) while in blade mode. Raiden can slice up his enemies through a technique known as "Zandatsu" where he cuts through enemies in order to retrieve an item or repair unit inside the enemy.

Cutting enemies up can get quite addicting since the screen slows down to show Raiden retrieving the item from an enemy. Raiden must cut out and collect the item before an enemy dies. While killing off an enemy, the game will switch to a slow motion sequence that allows Raiden to quickly perform a Zandatsu to slice up the enemy before it is fully defeated. Besides combat, the game also allows the use of stealth at times. Raiden can perform stealth kills and he can cut up the enemy right after! He can avoid confrontation altogether also. 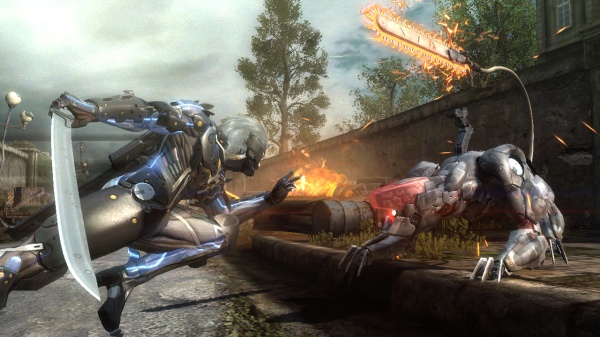 The game grades a player at the end of each enemy wave during a stage. The highest rank of "S" is awarded for gaining points from the way enemies are killed off. Points will give Raiden BP that he can use to buy enhancements for his weapons and armor. Raiden starts off with his sword, but he will gain access to secondary gun weapons and secondary melee weapons as the game progresses. I never truly found secondary gun weapons to be that useful except for shooting at flying enemies. Gun weapons include a grenade launcher, rocket launcher, frag grenade, and EMP grenade, as well as a few others. Raiden will often get an extra melee weapon once a boss is defeated. While a secondary melee weapon is equipped, Raiden's secondary attack will use that weapon (sai, spear, dual blades).

The game has a radar that can be used to locate items and enemies throughout a stage. Raiden's entire view can be changed to a radar mode in Rising. An on-screen alert meter is still used just like in MGS games. Once Raiden is spotted, an "Alert Mode" will activate and the stage enemies will attack him until all enemies are killed off or Raiden remains hidden from view. There is some slight stealth here and there, but it is no longer a focus. Raiden can seek shelter in cardboard boxes and oil drums just in MGS games in order to keep enemies and gun cameras from seeing him. The backgrounds and environments change up quite a bit through the many areas that Raiden travels to. He might be fighting enemies in a high-class building, along rooftops or out in the city. There are always objects that can be sliced up while Raiden moves through each area - he can slice trees, cars and many other objects into tiny pieces. The objects have a sort of "floaty" look to them after being sliced as if they are lighter than air.

The game clocked in at a little over six hours long once I had fully finished the game. I don't think that time included the cutscenes, but it included my failed attempts while going through the game on my first time, so that means the actual gameplay is shorter. The game has altogether 8 stages (stages 0-7). One of those stages can be beaten in just a few minutes and another stage is only a boss fight. Besides the short length, one problem that I found with Rising while making my way through it is that there is little variety while passing through a stage. The majority of the time, I fought wave after wave of enemies and only pressed buttons to open doors in between or simply moved to the next area with enemies. There are a few breaks in enemy battles such as running up a wall, running across a bridge as a helicopter destroys it or controlling a dwarf Gekko at one part - these are all nice breaks, but there should be more variety like this in each stage added between the fighting segments. Boss fights are truly fantastic, but getting to them feels like a chore at times or either getting to them is done way too quickly.

The combat of Rising is fun, but when it is spammed so much through constant normal enemy battles, it becomes repetitive. The game offers VR missions like other Metal Gear titles and these are quite nice. The game has tutorial VR missions that are unlocked through game progression and it also has a list of 20 VR missions that can be unlocked by activating laptops hidden throughout the story mode. Besides the hidden VR missions, there is also a list of titles to unlock by performing certain tasks through the story mode. The story mode has five levels of difficulties and there are some unlockables wigs in the game (like Snake bandannas) that can be used during replays. Raiden keeps all of his weapons and upgrades per playthrough as well, so there is a "New Game+". 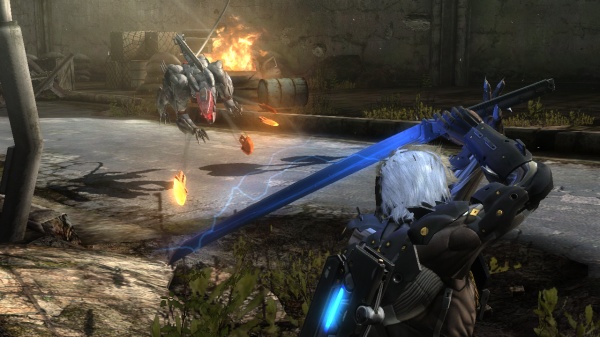 Overall, the game has a good bit of replay value to make up for its short campaign length. Players that just want to play through this game for the story might want to consider a rental. For a Metal Gear fan, this game's overall universe will be perfect for you. It feels just like any other Metal Gear game visually but the gameplay has a focus on action this time. The stealth is still there, but it's not a focus anymore. Metal Gear Rising doesn't break boundaries, but it's a good start for a full action Metal Gear.

The Good:
+ Good story and characters
+ The graphics are highly detailed and very fluid
+ Boss fights are quite entertaining

The Bad:
- Combat during stages can get repetitive - little variety
- Overall short game (only about 6 hours on first playthrough)

Final Rating: 75%. Metal Gear Rising: Revengeance is a solid action title that gives us a chance to learn more about Raiden.