Ah, high school. For me, it was the late 1990's. The PlayStation was in its heyday, grunge rock was finally dying (not that the resurgence of boy bands was any better) and hopes for the new millennium were on everyones' minds. If any one game defined those formative years for my friends and me, it was Tony Hawk Pro Skater. Even non-gamer friends joined in our obsession with the groundbreaking title, all of us spending hours and hours, together and separately, perfecting our techniques and chasing the perfect run through iconic levels like Warehouse and School. Some of the fondest memories from my high school days involve time spent sitting in smoke-filled basements, listening to punk rock, chatting and endlessly trying for the elusive 1,000,000 point, two-minute run. The release of Tony Hawk Pro Skater 2 only intensified our love affair, and I still consider the game not just the best direct sequel ever, but also the best PS1 game of all time. Nostalgia is a strong motivator for most gamers, myself included, so you had better believe I jumped at the chance to review the HD remake/re-imagining of the first two Hawk games, Tony Hawk Pro Skater HD. Whether you were around for the original titles or not, Activision's treatment of these classics demands to be played and loved. Welcome back, Mr. Hawk. We missed you.

I want to kick things off with a critique that will in no way affect the overall score of the game. Like most of you (the exception being N64 Tony Hawk fans), I learned to play the original Hawk games on the PS1's standard (i.e. no analog sticks) controller. Having to adjust to the 360's analog sticks and larger controller feels like learning to drive on the wrong side of the road. All the moves are there, but breaking yourself of habits learned over many years provides a pretty big challenge. It took me about a day to re-learn the Tony Hawk control scheme on a 360 controller. Once I did, though, everything felt as natural and smooth as ever. The control scheme in the originals and this HD remake are perfect; just be aware that you'll probably faceplant a few times before you can make the adjustment. If this is your first Hawk game or you never played the PS1 originals, feel free to disregard this criticism altogether.

It's best to think of this title as a kind of "greatest hits," not a straight up HD polish job. You won't find every level remastered or every song present, but what the developers chose to give us is a pretty good mix of the first games' best levels and tracks. The same holds true for playable skaters; Rodney Mullen is present and accounted for so you won't hear any beef with the pros represented. The level selection is varied and contains all-time favorites Warehouse, School II, Hangar, Marseilles and Venice, among others. These choices make up for the occasional misstep; the Mall stage, a favorite to exactly no one, is in the game. Why? Even the Bullring was better than the Mall! C'mon! 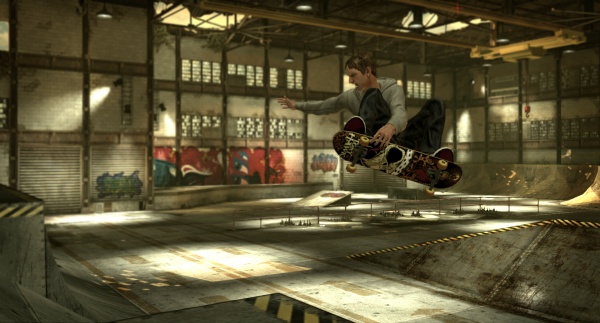 The song selection doesn't quite live up to the mostly excellent choices in pro skaters and classic levels. I should tell you the tracklist is fairly small, and only about half of the songs come from the original games. NONE of the new songs are very good, and longtime fans will assuredly be asking why some classic tracks were included while others were dropped. Bad Religion and Lagwagon did make the cut, but The Dub Pistols iconic "Cyclone" did not. That track was part of the THPS2 demo (one of two songs) and if my friends were any indication, people played that demo to death while they waited for the sequel to the best skating game ever made (to that point). Skating around Marseilles (the only level in the demo) without "Cyclone" blaring feels wrong, almost sacrilegious. Driving the knife deeper is the fact that some truly awful tracks (ummm... Goldfinger?!) made the cut while classic are ignored. I would have been much happier with the originals' full soundtracks intact and no new songs, but what's done is done, I suppose.

That's it. You've heard every negative thing I have to say about Tony's HD remix. Some iffy song and level choices, along with a personal roadblock in learning to play on a totally new controller, are the only things I can find wrong with the title, and if this is your first Hawk game, those criticisms don't even apply to you. So, with hardcore fan beefs out of the way, let's talk about the new HD graphics first. Memory has a way of glossing things over so if you want to know how much of an improvement the visuals received, you should probably play (or watch videos online of) the old games again. They're pretty ugly, to be sure, and checking them out makes this one look even nicer. Though the environments are virtually identical layout-wise (if they weren't, there would be hell to pay), seeing them with next-gen HD improvements is a delight. If you've ever seen Maury Povich do the whole "I used to be a geek, but now I'm hot" song and dance, you'll have an idea of what to expect with these new graphics. They're familiar, but they no longer have hot pink legwarmers, lavender sweatshirts featuring baby kitties and side ponytails. 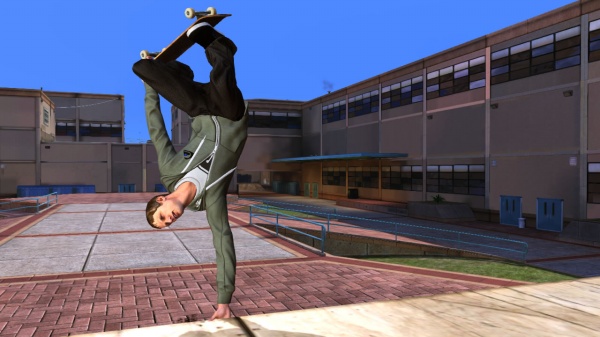 The Pro Skater series is an extremely long-running franchise, so I won't bother explaining how the game is played. You should know about sick scores, collecting S-K-A-T-E and the like by now, even if only in passing. Instead, I want to talk about the improvements and new wrinkles not found in the original. Most notably, players must now find a hidden DVD in every level, a change from the hidden VHS tape of the past. Little things like this show the developers took the job of remaking the best Hawk games very seriously, and they should be commended for it. Other additions include full maps with goal and gap (!) checklists, with locations of the former and hints for the latter. Also, the all-important manual and revert moves have been implemented across all the levels, and they make even the most familiar of environments feel fresh and new (neither move were in the original THPS, the manual was introduced in THPS2). And guess what? All this greatness is available for the insanely low price of $15. Astonishing.

As a reviewer, I usually find myself playing a handful of games at once. For the first time in a while, I've dropped everything for one game, Tony Hawk Pro Skater HD. Equal parts nostalgia and timeless, always fun gameplay, this title has dominated my attention exactly like it used to in the old days. Even though classic Hawk fans will have to adjust to the controls and will no doubt find some songs or levels missing, I can't stress enough just how good this downloadable title turned out. During Tony Hawk's darker times, I proclaimed the Skate series to be the new king of the skating genre. With this HD update, the Pro Skater franchise is back on top. Check this out as soon as humanly possible.

Final Rating: 96%. It's better than it has any business being.