Asura's Wrath is the most explosive and over-the-top experience that I have had from a game in quite some time. I very seldom play games that offer such a unique and engaging experience on the first time through. Asura's Wrath is the type of game where you never truly know what to expect to happen next. The game constantly adds variety to its gameplay and kept me involved throughout the entirety of its story mode.

The player takes on the role of the demigod, Asura. Asura is one of the Eight Guardian Generals of the Shinkoku army. Their main mission is to eradicate the Gohma (creatures) and destroy the Gohma Vlitra (main source of the Gohma). After defeating the Gohma Vlitra, Asura is framed for the death of the emperor by his fellow comrades. His daughter is taken from him and Asura is cast out of heaven. 12000 years later, Asura awakens and seeks vengeance on his former comrades. They will feel Asura's Wrath and so shall you since this game really does give you a feel for the action at hand.

Asura's Wrath offers a mix of several variations of gameplay. It has Quick Time Events (QTEs), shooter segments, action segments, boss fights and even a drinking mini game in a pool. Asura's Wrath is a very cutscene driven action game, so QTE's are the main form of gameplay present throughout the story. The cutscenes take up the majority of each episode. Each episode last around 20 minutes most of the time. The cutscene action plays out much like an episode of Dragonball Z.

The QTE's present in Asura's Wrath are often during intense situations and add a lot of depth to the action that takes place. These are not your ordinary QTEs that are sprinkled throughout a cutscene just to add some extra gameplay - these QTEs are very well placed most of the time. To put it simply, there were times where I have never felt so godlike as I mashed the circle button and hit R2. The QTEs help to bring out the feeling of the action that is taking place in Asura's Wrath very well. 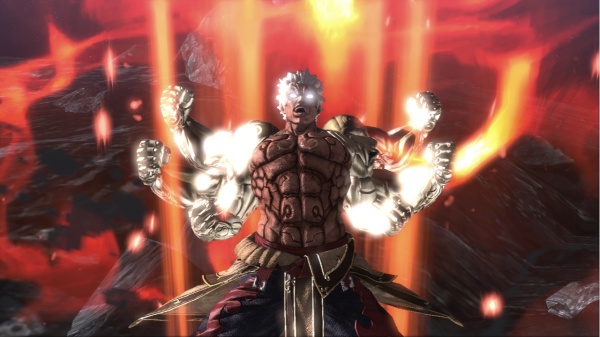 The game grades a player on how well you respond to the button or command inputs as they appear. Failure to input a command will not stop the cutscene. The cutscene will continue but a player will have a lower synch grade at the end of that episode from not inputting the commands. Basically, you can't get a "game over" from failing a QTE.

Shooter segments show a behind view of Asura. He can fire a set of rapid beams or he can lock-on to distant targets then shoot a homing beam at the target. He can also perform melee attacks once a target gets close enough to him. The game offers both air and ground shooter segments. The air shooter segments play out much like a standard 3-D shooter. Shooter segments on the ground allow a player to move and attack with normal melee attacks in between firing. Asura can fire shots at targets anytime during normal action gameplay, but melee attacks are often the better choice.

Action segments play out much like God of War. The action segments offer intense action and a wide variety of moves. Asura has two normal types of melee attacks while on the ground. He can hit with an enemy with a heavy attack to knock them down or hit an enemy with a series of light attacks that can be combined together to take off more damage. Once Asura has knocked an enemy to the ground, he can perform a finishing attack to that enemy to take off some major damage that will often kill the enemy.

Really, knocking the enemy to the ground then performing a finishing attack is the main helpful way to speed up each battle since Asura's ground hits take off so much damage. While using heavy and finishing attacks, Asura will enter overdrive (basically overheat) and a player must wait out the overdrive effect in order to perform another heavy or finishing attacks. Asura can enter an unlimited mode by filling the unlimited gauge and not have to worry about overdrive for a certain period of time however. 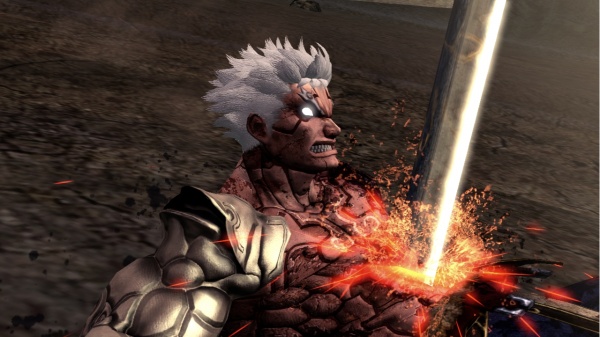 Asura can counter attack enemies once they move toward him and perform a specific type of attack. A player can press the on-screen button that appears during certain enemy attacks in order to counter the attack. All of Asura's actions will fill his burst gauge and allow him to perform a burst attack, which will leads into a cutscene. The main goal of any action sequence is to fill the burst gauge and unleash a burst attack on a specific enemy or object.

Boss fights play out much like normal action segments except it becomes much harder to hit the enemy and build the burst gauge. Bosses often require a player to dodge boss attacks until a certain recovery point for a boss is noticed then knock the boss to the ground and perform a ground attack to build the burst gauge. Boss battle in Aura's Wrath are quite epic and they often have multiple segments.

A player is graded by time, battle points and synch at the end of each episode. The time is the overall time spent in any type of gampelay sequence. The battle points are your overall variety of attacks in shooter segments and action segments - basically, the more variety your Asura has, the higher the battle points will be. Synch is how fast or accurately you respond to QTEs. All of these listings are quite hard to S-rank per episode.

Aura's Wrath has a Japanese manga style to it. The action will stop quite frequently to display a still picture of a character much like out of a manga. The drawings and overall look of the game is highly influenced by Asian mythology. All character designs look very unique and quite detailed. Each character has many forms that they can take to display their current power level. Asura can sprout a total of six arms and he can also enter a Berserker mode when fully powered.

The game includes both English and Japanese tracks. The English voice acting sounded perfect to me so I never even switched over to the Japanese voices. The sound effects and music add to the intensity of each scene. Action sequences have a very explosive feel to them thanks to the overall sound and appearance. Action segments have a sort of echo per hit that give hard hitting blows much more of a heavy impact feel. 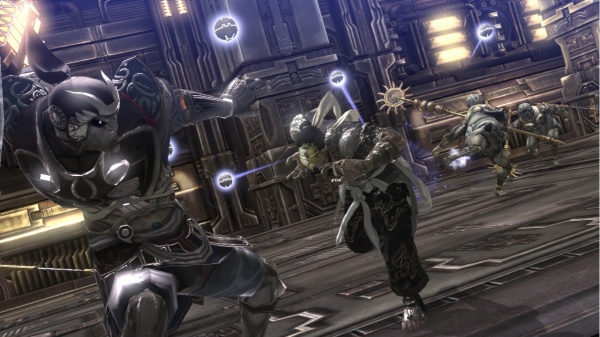 Even with all of its good qualities, once the game is over, Asura's Wrath falls flat on its face when it comes to replay value for the most part. The game has a total of 17 episodes and one bonus episode. The only real reason to go back through the episodes again is to try for an S-rank or experience the story again. When you choose to go back through an episode and try for an S-rank, you'll be hitting the Select button a bunch as you skip a multitude of cutscenes.

Asura's Wrath is an absolutely beautiful game and a great experience that every player should try at least once. The cutscenes take up the majority of the game while playing through it. The game took me about 7+ hours to fully complete, so in reality, the game only has about 2+ hours worth of actual gameplay. Even with that limited gameplay, Asura's Wrath is definitely a game to try, just make sure you know what you're getting yourself into before you buy it. It's hard to fork over $60 for a game with such limited actual gameplay, but the overall style and experience gained from the story might be worth it to some gamers.

The Good:
+ One of the most epic storytelling experiences from Capcom
+ Tons of variety in gameplay
+ Epic, explosive and engaging game all the way until the end

The Bad:
- There is only about 2+ hours worth of actual gameplay
- There is not much reason to replay outside of S-ranks

Final Rating: 78%. Asura's Wrath is a definite explosive and engaging experience on the first time through but falls short when it comes to replay.