Serious Sam Double D XXL is basically side-scrolling action game meets bullet hell shmup, except in this case you're as much a contributor to the bullet-rich environment as your enemies. Your source of all of this firepower is the game's "gun stacker" system that allows you to use the connectors you find hidden in the game's levels to stack up to six guns together to create something out of a Wayne LaPierre fantasy. You can combine the game's eight different weapons in any combination and, furthermore, you can purchase different power-ups for each weapon such as an air buffer to aid your jumps or a health leecher that will let you take health from your enemies at their expense. You can keep a few different stacks in your arsenal and switch between them at checkpoints, so there's a lot of room for experimentation. You also need to be a bit strategic in designing your stacks as simply loading up on just the most powerful weapons will probably mean that you'll find yourself continuously running out of the required type of ammunition, and some weapons are better at close range than at a distance and vice-versa.

As you can probably imagine, with all of those guns piled on each other and spitting out lead, rockets, and flames, things can get pretty crazy. There are times when the screen will be so filled with enemies, bullets, and corpses, that it can be hard to keep track of everything - for both you and the game, which has a tendency to experience some slowdown during particularly hectic moments. Adding to the frenzy is the fact that the corpses of slain enemies remain on screen and will begin to pile up during battles. In a way, these corpse piles make for dynamic levels in that they become impromptu barriers to the enemies that come up behind their slain comrades as well as serving as platforms that let you reach higher places. In fact, one interesting sequence early on in the game has you lifting yourself out of a pit by piling up the corpses until you raise yourself high enough to leap out. 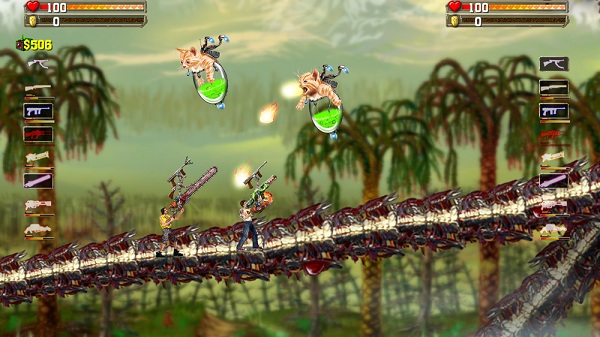 Yes, those are deadly kittens...

The game's levels are laid out in classic side-scroller fashion, with raised platforms and paths adding a little verticality to the game. There are secret spots on the maps to locate hidden behind fake walls and on hard to reach platforms, and since the game is fond of hiding connectors in such spots it pays to do a little exploring. Not that you'll have to go much out of your way, though, overall the levels are pretty linear and contained.

The game supports local co-op play which essentially gives you twice the firepower as in the single player game since the levels and enemies remain the same between the two modes. There's also the added bonus that a player can revive a fallen comrade. As you might imagine, in general the game is more fun with a friend playing next to you than without, although the game's platforming aspects can be a little frustrating when you've got two players to worry about.

The game's gun stacker system is an interesting feature, but unfortunately the rest of the game isn't nearly as interesting. There's a large variety of enemies, most of which look like they've escaped from a Terry Gilliam cartoon, but their attacks fall into a small handful of styles - you'll primarily be dealing with enemies that charge right at you and then explode or those who hover in the air lobbing explosives at you. The game is fun at first, in no small part due to the craziness of it all, but it quickly begins to feel like you're just seeing more of the same, over and again. The incessant junior high level humor doesn't help much either, as that wears thin faster than the repetitive gameplay. The game is certainly crazy, but in this case 'crazy' isn't enough alone to make the game more than a quickly passing novelty.