SC5's overall gameplay is faster and more polished than SC4. The combat is very smooth and the fighting is still just as flashy. SC5 takes away several characters from the expansive line-up of favorites that was in SC4 and adds in several new faces. It is nice to see several new faces instead of the same characters once again with added features. SC5 has a fresh feel to it with all the new characters. However, the problem that I find with some of the new characters is that some of them carry older character move sets. For instance, Xiba carries most of Kilik's move assortment, Natsu is your basic Taki and Leixia is much like Xianghua. All of these characters have newer moves but their style is very similar to characters that they are based off of.

Many older characters as brought back as well. Mitsurugi, Voldo, Ivy, Algol, Siegfried, Nightmare, Astaroth among a few other older characters are in this installment as well. Their move sets have been changed up a bit to keep them feeling fresh.

There are a few new characters that are more original like Viola, Z.W.E.I. and Ezio. Viola fights with a crystal ball and steel claw nails, Z.W.E.I. has a sword and attacks his enemies with a familiar, Ezio Auditore is the guest character assassin from Assassin's Creed and he is a very welcome addition to the SC line-up. Ezio is actually the best guest character so far since he matches the time period quite well and is not so overdone as to make him more powerful than other characters. 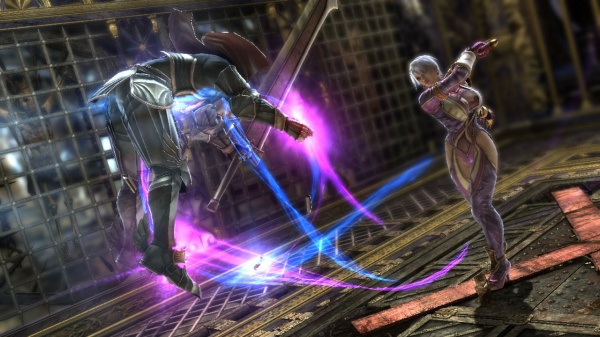 Story mode is only 20 chapters long. Basically it's 20 (sometimes prolonged) fights with added cutscenes. The cutscenes are quite nice and engaging compared to the usual screen of text that accompanies most other SoulCalibur character stories, but the problem with SC5's story mode is that it only allows a player to play with a few characters (three) and it is over in about a little over 2 hours. If the story mode could have had the same amount of cutscene display with each character to tell their story, it would be quite memorable, but in it's current state, it's over way too quick.

SC5's single player modes are Legendary Souls, Arcade, Quick Battle, VS Battle and Training. Legendary Souls is a harder arcade mode - the opponents in this mode will make mincemeat out of a player if you don't know your character well. Arcade is your standard stage-by-stage progression of fighting six opponents. Quick Battle is where a single player will spend most of their time. It allows a player to choose between several custom characters and normal characters and fight them to unlock new titles. This mode has tons of opponents that can be fought.

S Battle is your basic one on one fight that you can set up instantly between you and the CPU or two CPU opponents. Training is the standard training mode that you would expect in any fighter now. Like SC3 and SC4, the game still has a Character Creation option that allows a player to create a custom character. Several pieces of equipment can be unlocked and others can be bought off the Xbox LIVE Marketplace/PS Store. The Character Creation in SC5 really hasn't change much outside of extra equipment pieces overall. 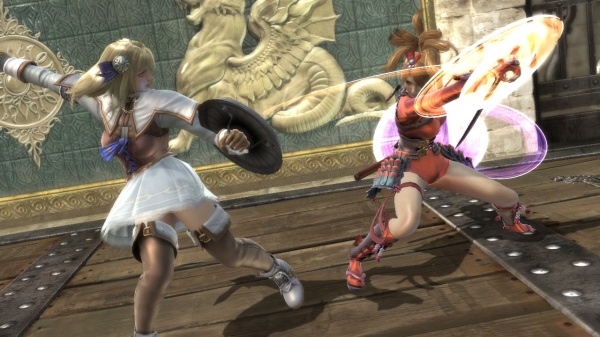 One problem that I found with SC5's new features is that they are not explained in the game through tutorial or even anywhere in the game. The game is not very user friendly for beginning players. On the flip side, the tutorial mode can be very detailed for those that are willing to experiment. A player can cycle through all moves and combos per fighter and have them shown off in a demonstration or have them up on the screen while practicing in real time.

The online in SC5 is much like online modes in other fighters now. A player can enter lobbies and watch fights through a spectator mode while waiting for a chance to play. The fight can be shown on a lobby screen or it can look blown up like a usual fight on your TV. You can choose to continually spectate in a lobby or fight.

There are also area lobbies per region of each country. Each country has several lobby regions that one can enter to do battle with players that are more local. The only problem with this is that some regions are much more popular than others, but it's still a very nice lobby system.

Replays are saved after each fight. Your last few online battles are always recorded and stored away in case you want to view them again. A player can choose other players as their rival after fighting them. Up to three rivals can be chosen. A rival's replays can be viewed in order to see some of their fights. A player can keep up with rivals through a "Soul Link" option on the main menu and view that players overall stats. 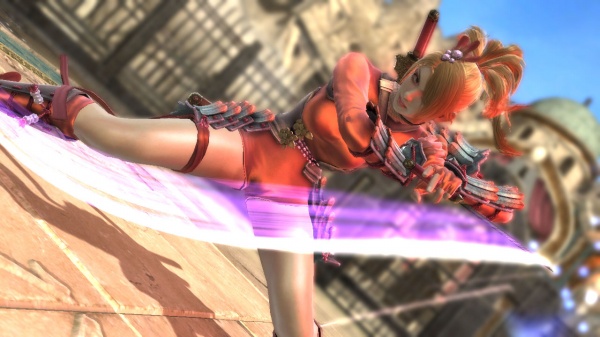 As usual with a Soulcalibur, the graphics in SC5 are superb. Each fighter has tons of areas with flowing animation on them from their hair to their clothes. The weapon effects are all still as flashy as in previous installments. The actual stages look much better than those in SC4. There is much more environmental detail and overall lighting effects in SC5 and this is displayed on just about every stage. SC5 offers a great variety of arenas to fight in also.

The sound in SC5 is just as epic as in any other installment. Stages all have multiple soundtracks, some of which can be unlocked in the game. Character voices are available in English and in Japanese and they all seem fitting per character. Xiba sounds whiny, Voldo sounds disturbing, Seigfried still carries a serious tone of voice and Ezio's voice actor really brings to life his cold yet calm nature. The character voices in the story mode really bring the scenes in the story to life pretty well and make it interesting to sit back and watch no matter how short the story is. I have to really give props to the newer announcer also - he sounds much different from previous announcers and fits the game perfectly with a soft and very clear voice that echoes quite well in surround sound.

SC5 has several unlockable characters, but I cannot get passed how the game has three that seem very lazy. Edge Master is known for wielding all weapons, so I'm ok with him, but when we start bringing other characters that can do the same exact thing and establish them as a new character, I can't help but think that the designers were running out of ideas. Elysium can randomly switch between all female move sets and Kilik can now switch between all male move sets. Put them alongside Edge Master and now you have three extra characters that are random weapon set wielders. Besides these three there are a few other unlockable characters as well and even an unlockable style - Devil Jin. 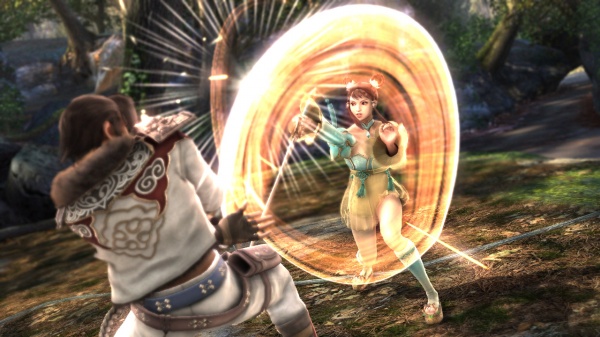 Overall, SC5 is just as polished of a game as other installments in the series, but it is lacking quite a bit in its single player options. The story mode is the weakest story mode so far in a Soulcalibur. The story is actually quite good and well displayed, but it's so very short! Quick Battle is a good addition for single player replay, but SC4 still offered more in terms of replay value for single player. Long time SC fans can probably look past the flaws and enjoy SC5 for it's fantastic online play and overall flashy gameplay. It's actually better than SC4 when it comes to online. Really, how well you enjoy SC5 depends on how deep you are willing to go to learn it. The main fun lies in competition through online play and SC5 really has all the setups for major enjoyment that area!

The Good:
+ Graphics and overall visuals are excellent
+ The overall sound is quite epic in every aspect
+ Much better online options than SoulCalibur IV
+ Ezio is the most fitting guest character so far

Final Rating: 85%. Soulcalibur V is just as solid of a fighter as its predecessors but it hit a few bumps somewhere in that 17 year skip from the last installment.