Remember Pulp Fiction? In it, Uma Thurman asks John Travolta if he's a Beatles man or an Elvis man. According to her, there are only two types of people in the world; everyone chooses one answer over another. Jump forward nearly decades and we've got a new question, this time with three answers: Are you a Dragon Ball person, a Naruto person or a One Piece person? Anyone familiar with anime will inevitably fall into one of these three subsections. My answer? Dragon Ball Z. So how will this guy reviewing the latest Naruto game be fair? Luckily, the newest sequel in the Ninja Storm series, Naruto: Ultimate Ninja Storm Generations, is fully featured and fun enough to bring even the most die-hard pirates and Super Saiyans on board.

Ultimate Ninja Storm Generations follows Naruto's story from his fight with first Zabuza all the way up to nearly where the series is now. The story's size and scope allows for nearly every character ever to appear on the series to show up as a playable fighter with all the fan-favorite moves intact (72 in all). And, in a move I can't remember ever seeing before, the previously mentioned story is broken up into mini storylines that follow one particular part of the plot. The story only begins to come together as you see these mini-campaigns cross paths, though I expect most will already have at least a working knowledge of the tale. The completionist in me HAD to finish each and every storyline, and the game did a good job of filling me in on the parts of the plot I hadn't seen or already forgot. If you want to slog through Naruto's entire history, you'd be better served by reading the manga. But if you just want a competent retelling, one that exists to move the story along, Ultimate Ninja Storm Generations does the job well.

Though I'm not really a fan, the artwork of Naruto has always been pretty appealing to me; the artwork was the reason I decided to give the manga a shot. The vibrant, colorful world of the anime is lovingly recreated here (the manga was in black and white), and the cel-shaded graphics are among the best I've seen; the presentation even rivals the previous cel-shaded king, Dragon Ball Z: Ultimate Tenkaichi. And speaking of that game, Ultimate Ninja Storm takes a page from DBZ's book by giving players plenty of new (and beautiful) hand-drawn anime cutscenes. Add in some non-grating voice acting (I couldn't believe it either!) and Ultimate Ninja Storm Generations is the best looking and best sounding Naruto game yet, and may even rival Ultimate Tenkaichi. Wow.

I hate to keep drawing parallels to older, non-Naruto games, but it just can't be helped when it comes to how this fighter plays. Like a lot of other anime-based games, the controls are deceptively simple: punch, kick, block, energy. That's it. I'm just going to say it: these controls just work. They are simple enough to allow success in younger, more "button-mashy" players, but more hardcore fighters will quickly figure out all the little nuances that make this so much more than just a "hit A til one of us dies" game. And since everyone wants to see the special attacks and jutsus, these controls permit anyone, of any skill level, to pull them off with ease. If you have ever been turned off by combo breakers, hit boxes, juggles and all that stuff that seems impossible to pull off in more complex fighters, then Ultimate Ninja Storm Generations is the fighter for you. 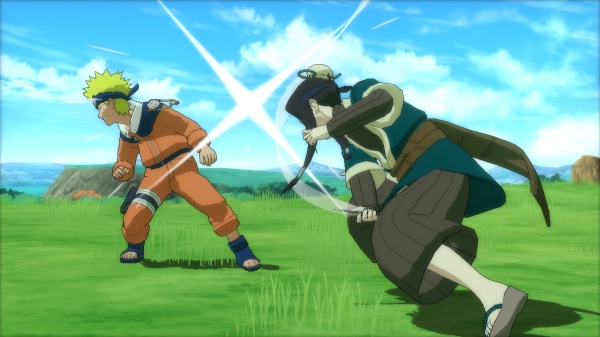 Though I'm not usually one for playing online, especially fighters and first-person shooters, but Naruto's latest adventure contains an online component that completely eclipsed my hatred of playing with others. In Ninja Info Card Battle mode, players can compare and trade real-life cards, and each card contains some bonuses and attributes. The part of me that fell for Skylanders and Pokemon (and most recently, Kid Icarus: Uprising's AR cards) fell HARD for this; the game comes packed with a single card and it's up to you to collect the rest. I applaud the developers in having the courage to try something a little different with an online suite, and I'm happy to report that it not only works well, it has been almost as fun collecting the cards as playing the game itself!

Naruto: Ultimate Ninja Storm Generations comes in as one of, if not the, best anime fighter I've yet played. The graphics are bright and always engaging, the controls are spectacularly geared toward players of all skill levels and the online card trading seals the deal. Like I said before, if Uma Thurman asked the question, my answer would be Dragon Ball Z. So the bottom line is this: Ultimate Ninja Storm Generations is the first anime game I've played in a while that doesn't deserve the distinction of "for fans only."

Final Rating: 86%. It's not just for Naruto fans, and that's saying a lot.