I'll ask you to bear with me over the course of this review, as Dark Souls on the Xbox 360 is one of the hardest games I've ever had the chance to play, or in this case, review. Dark Souls, the semi-sequel to the PS3 exclusive and Game of the Year winner Demon's Souls, is the kind of game that needs no introduction; people have been talking in hushed tones for months about just how hard it would be, their voices sounding more like they were discussing what it would be like to be one of Freddy Krueger's victims than playing a new game. Demon's Souls was legendary in both its difficulty and grandeur, and those who played and loved it (myself included) expected no less than a miracle from its sequel. Good news, everyone: Dark Souls is not only a worthy sequel to my favorite RPG this generation, it manages to blow the original out of the water in every single respect.

Since so much has been made of Dark Souls punishing challenge, let's start there. The game opens with your created character awakening in an undead filled dungeon. Eventually you procure a suitable sword and shield, and before long you are confronted by an enormous beast. Video game logic dictates you must run, only to power up and return to slay the beast when you are able. Not in Dark Souls. In the first 30 minutes of game time, you must face and bring down a boss that would have just about any Final Fantasy protagonist holding L and R to escape. Once you do manage to slay the beast, it occurs to you: the game hasn't even started yet. This realization is only made more damning by a cutscene and credit roll that follows, and getting control of your character again feels almost too hopeless to bear. Sound like fun? 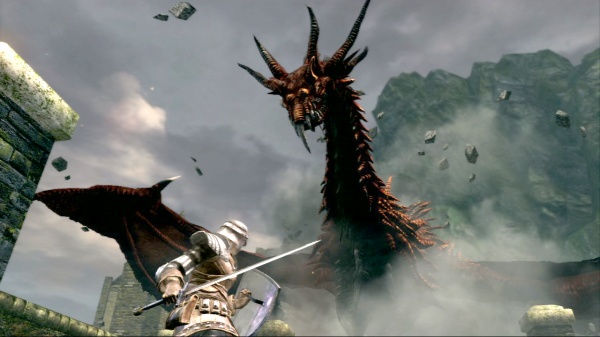 Actually, it is. A ton of fun. Screen-filling bosses are only part of the challenge, though. You'll also have to contend with a near constant stream of deaths on your part as you figure out how to make each next step. Even rank and file enemies can bring you down in a hit or two, and there are traps literally everywhere. Die once and you'll be returned to your last checkpoint, sans your accumulated souls, the game's currency. If you can manage to get back to the spot you died at, you can reclaim those souls and move on. Die again and they are lost forever. And lastly, if you save/recharge at one of the game's checkpoints, all previously slain enemies respawn. No kidding.

Dark Souls is hard, no question. But what makes the difficulty work is that you never feel cheated when you die. Each failure can be analyzed and there is always, ALWAYS a way out of even the roughest spots. The �just to the next checkpoint� drive is as addictive as any Angry Birds, and slowly forces the player to get better at the game. Anyone who knows my affinity for this type of thing knows that this is a huge selling point with me, and Dark Souls does it just as well as, say, a Tony Hawk or Ninja Gaiden.

And speaking of cheap deaths, you won't have any to blame on the game's controls. The work extremely well, as good as any third person action title, but they also contain Dark Souls' biggest fault. I'll explain: If you mean to survive for any amount of time in Dark Souls, you'll need to keep your shield up at all times. The trouble is, on the Xbox 360 version, the shield is mapped (by default) to the R bumper. Holding this tiny button for more than a minute or two can lead to some serious hand pain, and chances are you'll be holding it for the better part of 40 hours. I don't remember having this issue with Demon's Souls on the PS3, so I assume this is a 360 exclusive problem. No, it doesn't break the whole game, but it is a dark stain on the game's otherwise pristine condition (not to mention it will probably start WWIII between Sony and Microsoft loyalists). 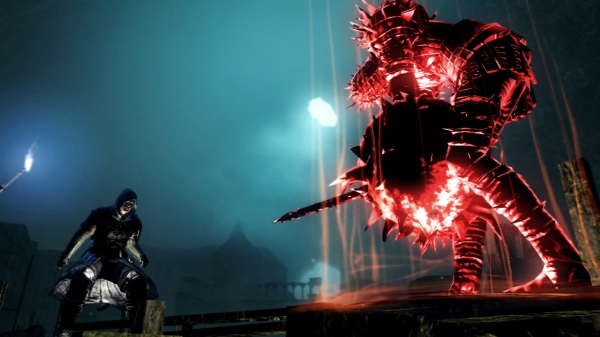 On top of all that good stuff, Dark Souls also manages to be one of the best looking console games ever. The opening cinematic is absolutely stunning, and the game itself looks almost as good. The environments are all richly detailed and ooze realism, but its the enemies and bosses that steal the show. Some of the dragons and beasties you'll go toe to toe with look so real, you'd swear you could reach out and touch them. And even when you aren't battling them, the dragons will be present for a good part of the time. Early in the game a monstrous flying beast clips the walkway you are traversing. It looks amazing, and these instances draw players even further into the adventure.

Last, lets talk about Dark Souls' online multiplayer, which should serve as a model to those who feel the need to shoehorn this feature into games, whether they need to or not. Instead of yet another boring deathmatch, Dark Souls allows players to see others playing right along side you. Other players can leave hints, help people out, etc., and this passiveness makes it more than just another online game.

It's hard to put a score on the Xbox 360 version of Dark Souls. It is, hands down, the best RPG of this console generation, but that one minor control issue keeps it just shy of a perfect score. But no matter which version you get, just make sure you get one. No console gamer's collection is complete without this masterpiece.

Final Rating: 98%. No console gamer's collection is complete without this masterpiece.