Gotham City Imposters brings a healthy dose of humor to the rather grim and staid Batman universe.  Batman doesn't make an appearance in the game and neither does his nemesis the Joker, but that doesn't stop hordes of their overzealous (and slightly delusional) admirers from carrying on their long-running battle.  Wearing costumes that they've cobbled together from bath towels, long underwear, and cardboard boxes that only an eight year old could appreciate, equipped with gadgets cobbled together in their garages, and carrying heavy weapons, the Batz and the Jokerz try to settle the score once and for all.  With the game's setup it's a bit disappointing that Gotham City Imposters is a multiplayer only game, but that doesn't mean that you can't have fun with the premise, especially these days when online shooters all seem to take themselves too seriously.

There are three games modes in Gotham City Imposters: the requisite team death match, fumigation, and psych warfare.  The second two might sound like bona fide new game modes in the thoroughly comfortable multiplayer shooter world, but they're actually imposter variations on the traditional domination and bomb modes.  In fumigation the control points are poison gas stockpiles and in psych warfare capturing the battery and bringing it to the propaganda machine that will turn the other team uncontrollable for a short period of time.

You couldn't really have a Batman game (or a Batman-inspired one) without gadgets and Gotham City Imposters sure doesn't skimp on them, although they all fit within the game's warped take on things. It should also be noted that to keep things fair from a multiplayer gaming perspective the Jokerz have access to an identical collection of gadgets. A grappling hook on a self-winding winch allows you to whisk yourself onto rooftops and across alleys. Roller skates let you quickly zip through the streets and let you catch air using the ramps scattered around the levels. Capes let you glide down silently on unsuspecting foes and reach high perches by riding the updrafts from vents. You can only equip one gadget at a time, though, so you'll want to select the one that best suits your build/loadout. 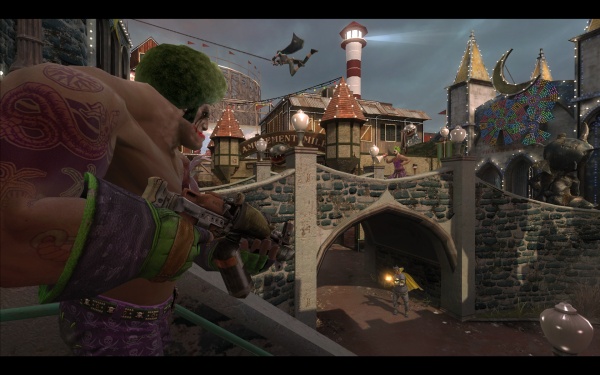 There's a common theme of verticality among the gadgets and the maps are all designed to take advantage of this. Rooftops, awnings, catwalks, and other perches and landings pepper the buildings of various heights that populate the maps. The map settings are all suitable Gotham City locations such as an abandoned amusement park, a chemical factory, and a gargoyle covered high rise, but the color palettes used are decidedly brighter than those typically seen anywhere Batman would tend to hang out. The maps have a decidedly comic book look and feel to them, but there is very little that's dark and gothic in this version of Gotham.

Gotham City Imposters features a level progression system similar to those found in most modern online shooters. Kills, assists, captures, challenges, ... there is no shortage of ways for you to gain experience and the costume coins and unlock keys you'll need to change your look or gain a new perk. A word of caution, though; the game doles out the last two items at a trickle. The reason for this is purely economic - the game wants to tax you impatience with micro-transactions. Everything in the game that you can unlock is also available for a price in Microsoft points, so you can either pony up several times what you paid for the game in the first place crafting a unique look for both your bat and your joker or invest hours in the game before you finally stop looking like every other noob in the game. Although you can unlock everything in the game with time, diligence, and patience, if you don't have all three of those then you're going to find your wallet micro-transactioned to pieces. To the game's credit, though, you don't have to dig deep to be competitive. Unlike many games that support level progression such as Modern Warfare 3, new players won't find themselves at an enormous disadvantage when just starting out. You won't find yourself sitting atop the post-game standing consistently when you're just starting out, but you will feel like you're holding your own and contributing to your team rather than feeling like you're cannon fodder simply playing to pad the stats of the high level players.

Overall Gotham City Imposters is a fun and fast-playing multiplayer game with a great sense of humor. If you're looking for a multiplayer shooter that you can jump into now and again for some quick fun, it's certainly worth a spot on your Xbox 360's hard drive.

Final Rating: 85%. Have some fun exploring Gotham City's lighter side.