The "Fuse" in Fuse is an alien substance that fell on the Earth years ago. An energy source of great power, it's also highly reactive, readily bonding with other elements and substances to form new compounds with highly useful properties. After decades of secret research on the substance, the shadowy paramilitary corporation Raven has developed several practical applications for Fuse, not surprisingly, all of which weaponize the substance. This attracts the attention of other shadowy groups, and the mercenary group Overstrike is sent in to put a stop to Raven's plans.

The Overstrike team consists of four operatives, Dalton, Jacob, Izzy, and Naya, each of whom is a playable character in the game and who pretty much fall into the archetypical roles of tank, sniper, healer, and stealth, respectively. Very early in the game, each of these operatives gets their hands on an experimental Fuse-powered weapon. For Dalton it's the Mag Shield, a portable force field that provides protection against incoming weapons fire but allows allies to fire through it from behind. The Mag Shield can also send all of the projectiles and grenades it's caught right back at the enemies who fired them. Jacob is armed with the Arc Shot, a sniping crossbow with flaming bolts. The Arc Shot's alt-fire turns the bolts into explosive traps that will wait until an enemy comes near to explode. Izzy wields the Shatter Gun, which encases enemies in a crystallized cocoon that can be, surprise, shattered by other weapons fire. Lastly, Naya sports the Warp Rifle. This weapon creates singularities that suck enemies into nothingness. If nearby enemies have been "painted" by the Warp Rifle when a singularity is created, a chain reaction is ignited which can quickly clear them all out. In addition to these effects, the weapons can combine their fire in nearly sixty different ways and part of the fun of the game is in trying to discover them all.

As for the gameplay, Fuse is a co-op (even in single player mode), cover-based shooter in which each of the game's chapters features an Overstrike team assault on an enemy base. These aren't you're typical military bases, though; they're more akin to the secret bases built by the evil masterminds in the classic James Bond films. A secret underwater lab, an alpine stronghold spread across mountaintops and connected by gondolas, a missile launch facility hidden in the jungle, ... you get the idea. All four operatives are always present, whether or not you have three friends (or strangers) to control the rest of the team. Whichever operatives are not player-controlled are taken over by the game's AI, so it's entirely possible for you to finish this "co-op" game on your own. The game is fully drop in/drop out on the fly to the point where any player can instantly switch to taking over an AI-controlled operative, a feature the game designates as "jump". AI-controlled characters are competent allies in that they know how to keep their heads down, provide helpful revives when needed, and kill a few enemies, but to keep the game from playing itself the operatives are nerfed once the AI takes over. This means that the human players will have to make the majority of the kills as well as handle everything interactive, from throwing switches to opening doors.

While there are some interesting locations within the bases and a few exciting sequences, for the most part there's a strong grinding element to the game. Run down some hallways and into a large area, fight off a few waves of enemies, and then exit through a door into the next hallway. The larger areas provide you with plenty of room to maneuver, and with opportunities to switch cover, flank enemies, or grab the high ground, but you're still facing swarms of the same enemies and mini bosses over and over again. By the time you pass the game's midway point, you'll really feel the grind and you'll cringe a little each time you're faced with yet another courtyard battle. It would have helped matters if the story would have been more compelling, but it's a shallow retread of the "evil paramilitary corporation bent on world destruction" theme that's been done to death in games and as such is not enough to push you through to the end without being acutely cognizant of the grind.

If you'd just assume dispense with the whole story mode thing and concentrate on the shooting, the game includes a horde-like Echelon mode. You and your co-op buddies (real or otherwise) must try to survive twelve progressively more challenging rounds, each drawn from a small pool of assault and defend challenges. Echelon mode is tough, so if you have three friends who you play with regularly you'll get your mileage out of the game in this mode. With six maps drawn from the game's six chapters waiting to be five-starred by your crew, Echelon mode will take you longer to complete than the game's campaign. And since the game doesn't distinguish between experience earned in the campaign and that earned in Echelon mode, you can always play a few rounds just to level up your characters to help them get through the campaign more easily. 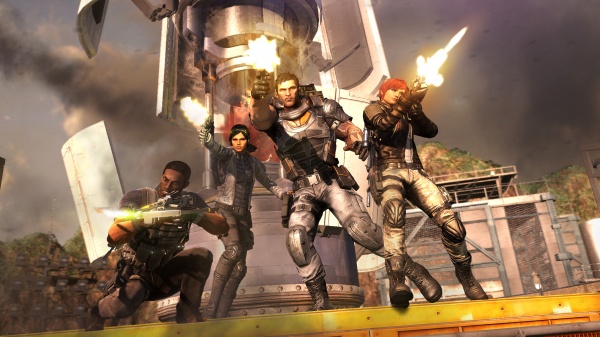 There's certainly the core of a good game here, but there are enough shortcomings with Fuse that relegate it to niche status. A greater variety of enemies would certainly help, especially when it comes to the game's mini bosses. Even a couple of the level-ending battles feel far too similar to each other. The character level progression needs to be deeper. Even though you can choose between a couple options at each skill tier, there's not really any room for specialization. I would have loved the option to craft Izzy into a strong support role character focused purely on healing and revive buffs, or to make Dalton a paladin-like, mixed tank character. The game could also use more puzzles, and a greater variety of them, that would really challenge four players to work together to get past them. Lastly, the Fuse universe feels like it could easily support a novel and engrossing story, so it's pretty disappointing that the game delivers such a thin and forgettable one. If you're looking to play a co-op, cover-based shooter with three close friends, you'll be happy enough with Fuse. Otherwise, you'll probably want to spend the dollars in your shooter game budget elsewhere.

Final Rating: 66%. Too much grinding to be much fun.