The Witcher 2: Assassins of Kings Review

It is a sad day for BioWare and Mass Effect 3. The trilogy-capping action RPG with the controversial (perfect, in this reviewer's opinion) ending only got to be king of the Xbox 360 hill for a matter of weeks. For as long as I waited to see what would happen to Commander Shepard and the crew of the Normandy, it feels almost sacrilegious to admit that BioWare's opus has been knocked down to second place. What juggernaut, what behemoth of an RPG usurped the throne? The Witcher 2: Assassin of Kings is that RPG, and not only does it eclipse Mass Effect's final chapter, it stands as the best RPG of this console generation.

Full disclosure: I never played the original Witcher as I'm not much of a PC gamer. Even more embarrassing, this PC-to Xbox 360-port wasn't even on my radar until it arrived in my mailbox. Like I said, I'm not much for PC gaming. So imagine my bewilderment when a game I'd never heard of almost instantly proved itself to be the most amazing game that I've played in quite some time. We will start with the plot. Witcher 2 tells the tale of Geralt, an impressive, white-haired soldier/peacekeeper who finds himself thrust into a political conflict even as he tries to recover his lost memory. Ok, I know amnesia is a lame, overused RPG plot device, but it somehow manages to feel fresh here, even as tangible and believable as the plight of Final Fantasy VII's Cloud Strife all those years ago.

Anyway, it seems that someone has been assassinating the Northern Kingdom's rulers and monarchs, and it falls to Geralt to unravel the mystery and apprehend the criminals. What makes this 30+ hour tale so engaging is that it feels as though this game is the first, maybe ever, to be slapped with an M rating it actually deserves. The Witcher 2 has a very deep, sophisticated story to tell; a story chockfull of high fantasy, bloody combat and even some nudity and sexual situations. This is a story that can only truly be appreciated and followed by actual adults, unlike most other M-rated games that tout immature, needless violence and aim it straight at the teenage demographic. I really, really don't want to delve into the plot much more than I have, as it needs to experienced by, not retold to, every single Xbox 360 owner over the age of 17. No joke; I haven't read a novel in the past five years with a story as engaging and fascinating as the one found in this game.

Let's talk about how the game looks and sounds next. The Witcher 2 easily comes in as one of, if not the, best looking game on Microsoft's console. Everything you see during Geralt's adventure is beautiful down to the most minute detail, and the characters manage to avoid that "mask" look that plagues some games with a lot of facial animation. In porting this game to the Xbox 360, some graphical compromises had to be made. You'll usually see these compromises in pop-in, some textures and light effects, but installing the game to the console's hard drive alleviates most of these issues. I imagine that, install or not, some players may never even notice the downgrade in graphical power. I'm not sure I would have if I wasn't playing the game for review.

The sound, specifically the voice acting, is superb as well. Tons upon tons of creatures, humans, townsfolk, even prostitutes have spoken lines, and there was never any inking of that detachment we all feel when voice acting is too over the top or just plain bad. The background music fits the proceedings quite well, swelling as you enter combat and waning afterwards. My only issue with the sound is that you'll often find yourself annoyed in areas with significant background noise. The first town of Flotsam will serve as my example. As I ran around the village, completing quests, the same damn dog kept barking/whining, the SAME SOUND, every 30 seconds of so. It's a minor complaint, but it's also one I'm sure anyone who spends enough time in any one place will notice. 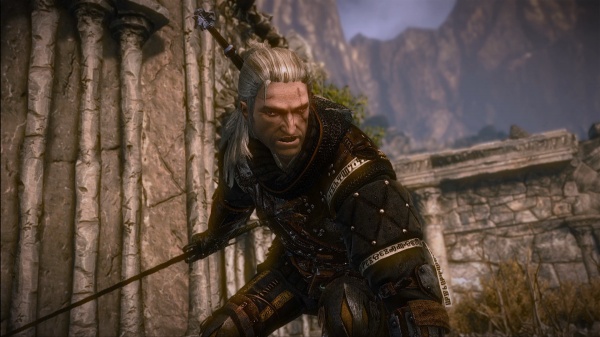 So far, you know that The Witcher 2 has an outstanding, deep storyline, beautiful graphics and almost-always great sound. That would be fine if this was an interactive storybook, but this is a game. So how does it play? Brilliantly. The framework of the third-person RPG has been in place for a while now, and this game smartly builds on that with an excellent combat system and way more to accomplish than you might imagine. We'll start with the combat. Geralt is a swordsman by trade, and you'll be swinging a variety of blades during the course of the adventure. But The Witcher 2 avoids the pitfalls of boredom by making the combat more action-oriented, rather than turn-based or otherwise. You'll have access to heavy and light attacks, magic, thrown weapons and a dodge roll. As you level up and gain more strength, the fighting stays exciting with a perfect upward difficulty slope.

The only problem (is it a problem?) is that the enemies in this game seem to have been drinking from the same water fountain as the bad guys from the NES "classic," The Adventures of Bayou Billy. Like the enemies found in Billy's endeavor, The Witcher 2's enemies take a whole lot of licking before they stop ticking. Geralt, despite having edged weapons, must bludgeon each and every bad guy to the point of total disintegration, far more punishment than any actual human would be able to take. This forces a disconnect in the player's mind as you watch an enemy's health go down sliver by sliver while Geralt reigns dozens of blows down upon their heads. It feels more weird than problematic in the end, and once you see it once or twice, the criticism will most likely fade.

The Witcher 2's other strong point is the game's quests, side and main, which are expertly designed to keep the player from feeling like they are just running errands for townsfolk and monarchs alike. There are more than a few "fetch quests" here, but nearly all of them move the story along in some way. Better yet, the design of these quests is such that even if you are just going to grab some item or kill some enemy, you still don't get that "fetch" feeling. Each quest contains its own wrinkle, and I never really felt like I was doing the same thing more than once or twice. Another endorsement for the quality of The Witcher 2's quests: Despite being on deadline for this review, I stayed up late into the wee hours, checking off quests and progressing the storyline. 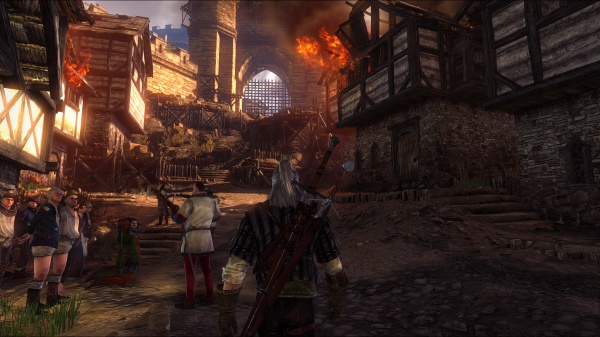 You knew it was coming. So, Jason, what is wrong with this masterpiece of an RPG? In the time I spent finishing the main story, I was only able to find a few faults. Very few. The first of which is the game's map. You always have a view of the mini map in the upper corner of the screen, but the legend by which the map is read is all but a mystery until you figure it out for yourself. This is really a small example of a larger problem, the game's apparent non-interest in properly training players to enjoy them game. The tutorial is clumsy and ultimately unhelpful, and no explanation is given on how to accomplish a good number of tasks (unless you dive head-first into the game's extensive lore and backstory). Crafting, alchemy, potions, even marked locations on your map, the game expects you to either know how all this works going in (impossible), or to just figure it out for yourself. With an RPG as fully-featured and complex as this one, leaving players in the dark is not only inexcusable, I imagine it will turn off some gamers who would have otherwise loved this title as much as I did.

It's not often that a game takes me by surprise. Tons of games come to me for review each year, and I usually know a little about what I'm getting into before I slide a disc into one of my consoles. The Witcher 2: Assassin of Kings came from way out in left field, a PC-to-Xbox 360 port, surprising me and simultaneously sending all other Xbox 360 RPGs to the electric chair. Geralt's story is deep and jaw-dropping, perhaps the first game to be given an M rating because of the actual maturity of the subject material. It looks great, it plays great, and despite kicking every uninitiated player right into the deep end of the pool with no water wings, this is a role-playing adventure for the ages. To put it plainly, if you own Microsoft's console, you must buy this game. But only if you are old enough to appreciate it.

Final Rating: 98%. The Witcher 2 looks great, plays great, and is a role-playing adventure for the ages.